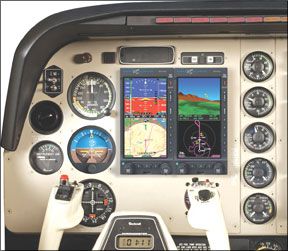 I am a subscriber to Aviation Consumer and ravenously enjoy each issue. I am sure that the Garmin GPSmap696 will receive unmitigated praise, as it probably deserves. I am an owner of a 496 and think it is an excellent product. The 696 seems exponentially better.

However, in all the reviews of GPS I have seen, scant attention is paid to the ongoing cost of keeping the databases up to date. The 496 has several different databases-terrain, AOPA data, navigation/Jeppesen and so on. I believe that if a user were to get every update, it would easily cost more than $1000 a year.

More alarming is the caveat in the 696 sales literature that if the IFR plates are not kept up to date (every 28 days, I think), they become inaccessible. Putting aside the questionable legality of this marketing approach (no one takes away my printed approach plates when they are outdated), I urge you to explore this issue from a pure cost perspective.

As you can see from the review on page 4 of this issue, the GPSmap 696 disables the plate function 180 days after expiration. One-time updates cost $95 and a yearly subscription is $395. Well look into the costs of database updates in a future issue.

In the meantime, our best advice is to realize that not all of those databases need to be current to be legal or safe.

I installed an Aspen EFD1000 in my 1977 Turbo Arrow nine flight hours ago. This thing is spectacular! I also put in a Garmin GNS430W, moved my existing 430 to the number two spot, had my Garmin 496 connected to the 430W, had the Century IIB autopilot overhauled and removed the NDB, DME and KX170B. Useful load went up to 1111 pounds. (Easy to remember.) I had two hours of instruction from the installer (Aviation Carolinas), had read through the manual thoroughly ahead of time and flew VFR for the first couple of flights on my own. After that, I went right into medium IFR on several flights. The whole setup is a delight to use and I feel much more confident flying IFR. The WAAS approaches are simply marvelous with the Aspen tied into the Century with GPSS roll steering. Anyone with a modicum of experience on instruments will find this rig very easy to transition into.

Not inexpensive-all the equipment and work described above plus more cost me $28,000, but I feel the cost was well worth it. The Turbo Arrow does 150 to 165 knots true and the whole rig-including NEXRAD on the 496 and a Strike Finder-gives me extraordinary, almost-all-weather capability. This at a total investment of well under $120,000, including custom rebuilt engine, custom leather interior and new paint. I have owned this airplane for 13 years and see even less reason to trade up than ever before.

I enjoyed your article on the differences between AirNav and 100LL.com. I have a lot of experience with both services and subscribe to both AirNavs Airboss service and to 100LL.coms inflight service. It may not be clear to your readers that 100LL.com can be accessed without a subscription through the internet. The subscription allows 100LL.coms data to be accessed through Control Visions Anywhere Map software in flight.

An important strength of AirNav is the reader comment section. This is where the pearls about a given FBO reside, like that the card reader is flaky, or that the mangers dog Ike likes Milkbones, or that the airport is often unattended after 1400 on weekends. This is also where you get information on ramp and parking fees and the presence or absence of such fees may often make a higher fuel price at a competing FBO less unattractive. 100LL.com offers no such functionality. AirNav offers links to hotels and car rental services on each airport page, so it is a valuable resource for pre-flight logistical planning.

AirNav relies on users to post fuel price updates and comments, so this is a true online user community. 100LL.com also allows users to post price updates, but seems to be slow to incorporate data on the site. Often many days elapse before new prices are posted. I believe that they confirm price changes themselves before posting them in an effort to be more accurate, but the practical effect is that, in my experience, 100LL.coms data is less reliable that AirNavs.

I have made two unscheduled fuel stops in the past year and used 100LL.com data in flight to select an airport. In both cases the price data was inaccurate and in both cases the inaccuracy was more than a dollar a gallon.

Using AirNav, it is possible to create a list of all fuel prices along a route of flight. It is a simple matter to save the Web page on my EFB and refer to it in flight, duplicating the functionality of 100LL.com with more accurate data and for free.

While the 406 MHz ELT manfacturers are waiting in the wings (and it looks as if they will be there awhile), I bought a SPOT Emergency GPS locater (www.findmespot.com).

I personally feel much more comfortable with it than with an ELT-probably because I fly an American Legend Cub, which means there is a good chance that I would survive most wrecks and either I or my passenger could press one of SPOTs transmit buttons. But lets face it, if we didnt survive, whats the rush?

Fortunately, I have not used SPOTs 911 mode, but it is just a button away. And if I had an airborne problem, I could press it in the air. Then, even if I glide a couple of miles, I would probably end up with a fix that is better than the new ELTs will give.

And if things are OK when I am on the ground, I could repress it and send my new GPS coordinates. For the curious, my 911 message (which goes to the 911 agency nearest my coordinates) is:

The message also contains my GPS location. I said “most likely” because I take SPOT along on car trips and I could have a problem there, too. I still want 911, but I dont want them to be looking only for an airplane and I may be too busy (or lazy) to reprogram the 911 message via SPOTs Website). Also, I am not too sure how 911 responders would use my coordinates. They may be unfamiliar with the new technology, so I send them to the FAA via WXBrief and also recommend they call a pilot friend.

However, the thing I like most about SPOT are its two other message modes. I use the “check in” mode on cross-county trips to send family members the simple message. “Tom has landed OK. Thanks for being there.” The third mode-ask for help-tells my family I may be having trouble and gives my coordinates.

So, all things considered, I feel more comfortable with SPOT than with an ELT. I am waiting for the 406 MHz issue to be resolved.