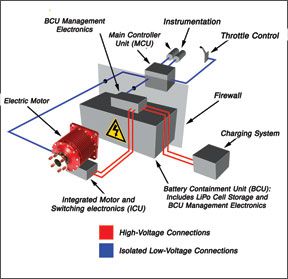 I enjoyed your article on electric airplanes very much, but would like to point out a technical error in the sidebar labeled “Its All About The Batteries.”

The author misuses the terms energy and power of the battery. This sounds like a technical nit, but it is the same as confusing tank capacity with fuel flow in discussing a gasoline-powered car or plane.

So, if a battery contains 80 kWh of energy and the engine draws 40 kilowatts of power, then the endurance of the plane is 80 kWh/40 kW equals 2 hours. In gasoline terms, a tank which contains 80 gallons and is drained at 40 gallons per hour will be empty in 2 hours.

The actual numbers in the sidebar appear correct, if one inserts the proper units, 0.06 kWh/pound for a typical lithium-ion battery.

Thanks to you and the 400 other readers who wrote to correct this oversight. Were aware of the concept; we simply neglected to insert the time element into the nomenclature.

There was an omission in the L3 SkyWatch Collision Avoidance System information published in the November 2009 article in Aviation Consumer, “Garmin GTS 800 Traffic: TAS with Room to Grow.”

A chart that included a couple of our systems omitted a key competitive system and prices listed were higher than current prices. The missing system is our SkyWatch HP TAS system, which falls between the two SkyWatch systems listed in the chart. The SkyWatch HP TAS current list price is $20,990. The range is 35 miles, as it is on the SkyWatch HP TCAS listed.

Also, readers may like to know we offer a generous five-year warranty on SkyWatch systems.

A Mite Stirred Up

Reference Aviation Consumer October 2009, page 28. This is the second time that I have recently needed to remind you

that as far as I know the best mileage from a certified plane is the Moony Mite, which cruises at between 125 and 130 MPH on the same Continental 65-HP as the Taylorcraft that you are reviewing. At 4 gallons per hour, the Mite yields between 31 and 32 MPG. I have owned a 1954 18C since 1970.

As we noted, the aerodiesel Diamond DA40 TDI bests the Mite considerably, with a mileage of 37 MPG. Well concede that among legacy aircraft, the Mite is a winner. But they arent exactly hot items on the used aircraft market.

Why Not a Hybrid?

It is interesting that you have articles on both diesel and electric aircraft in your October issue. In those articles, you make plain the basic problems with each. For electrics, as you say, it is all about the batteries, with poor energy and power density, in addition to the propensity of lithium-ion or -polymer batteries to burst into flame if abused. For diesels, it is about weight and durability of the engine.

Well, how about a hybrid of the two to eliminate both sets of issues? The kind of hybrid I am thinking about would have the diesel engine doing nothing but generating electricity to drive the prop motors. It would not have any mechanical connection to the prop, so it wouldnt need the heavy gearbox, flywheel, and torsional vibration damper.

If you include a battery for a reservoir of extra power for takeoff and initial climb, then you could also do away with the turbocharger. The A123 “Nanophosphate” type of lithium battery (www.a123systems.com) has a much higher power density and would be much more suitable for this function. They can be continuously discharged at a 35C rate, and are becoming popular with R/C modelers, such as myself, flying larger model aircraft that require more power.

The energy density is not as good as a LiPo, but the hybrid would be storing energy in the fuel tank at a much higher energy density. The A123 battery is also much more tolerant of abuse, and hence, is much safer.

Additional weight savings in the hybrid could be found in the electric-driven prop, since it would not have to absorb the vibration and sharp power pulses of a diesel.