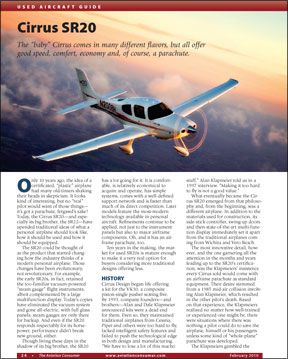 Nice article in the February 2010 issue on the Cirrus SR20. I would like to add some comments/corrections. I own the number two all-electric SR20 (s/n 1269) having taken delivery in January 2003 (boy, was it cold up there then). I have 650 hours on it now and generally have been very pleased with it.

You mentioned a $1200 cost for replacement of the reefing cutters every six years. There are two of these and at slightly over $1000 each, its slightly over $2000 to do the job. The number two alternator is a 20-amp B & C unit, same as used on the Bonanza, not the 35-amp unit you referenced. The carbon fiber wing used in the G3 is 50 pounds lighter than the original wing. That, plus the 50-pound increase in gross weight gives you a nice 100-pound increase in useful load.

You mentioned empty weights are typically 2000 pounds. My 2.1 version was 2136 pounds. My airplane is not heavily optioned and I think this weight is more typical.

I am mystified by the comment of one owner about a sharp wing fall off in a stall. All the Cirrus airplanes I have flown have exhibited very benign stall characteristics, probably the best I have ever flown. I wonder if one of his stall strips is missing. Except for the comments above, it was very accurate

And The Winner Is…

Thought Id spare you the trouble of doing another flashlight article and just declare the winner. I think its the Fenix L2D. It uses two AA batteries, can be had for about $50 from Amazon and although you cant use it to clobber someone over the head as you could with a six D-cell mag lite, it does everything else and more.

This delivers four different levels of light: Low, which is perfect for cockpit use, medium and high, which are better for preflighting at night. The highest use is the “turbo” mode, which delivers 180 lumens (with two AA batteries) but only for an hour or so.

Its made in China like everything else, but it has a quality, military-grade feel to it. The batteries probably wont last very long unless you use it in the low mode, but it uses a Cree LED bulb, which should last forever and is extraordinarily bright if you need it.

It also has strobe and SOS modes, which you will probably never use, but its nice to know they are there if you need them. No idea about the longevity of this light. But its only $50, its small (6 inches long and about the diameter of a AA battery) and impressively bright. Check it out. I dont work for the company, just love the product. I also have a Surefire 9P with an LED modification and this is better.

Great article (as usual) on flight planning. I won Seattles Voyager in a contest a couple of years ago. You described it very well. It is robust and full of so many features that unless used weekly, it becomes difficult to use. They keep adding great features all the time, making it that much harder to use.

They have excellent customer service, but even though I have a free copy of Voyager, I find myself using Fltplan.com which is free and extremely straight forward. It has 95 percent of the features I need.

One additional comment on EFBs: I purchased a Kindle DX as a result of your article a few months ago. While it stores everything but charts and is fairly easy to navigate and the display is about the same size as a chart, it is not as easy to view as a paper chart because the contrast just isnt there.

I have no problem reading books on the Kindle, but reading an approach plate requires a flashlight (even in daylight) or a magnifying glass. Keep up the good work; a great magazine even for us King Air drivers.

That Aint No Rocket

Its hard to fool a Mooniac. Thats not a Rocket on page 29 of the March issue and its not a TSIO-520-NB under the cowl, nor is it at K- model.

That is a Missile with an IO-550-A5B. Thats a J-model. The giveaway? The scimitar prop!