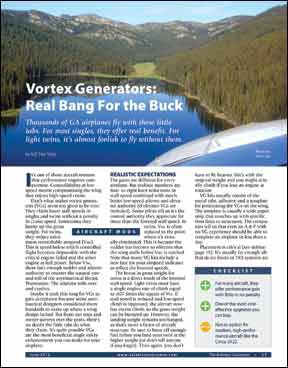 A Bike We Overlooked
I’m a long-time subscriber to your magazine who still has all the back copies for reference. In your current issue (see July 2012 Aviation Consumer) you review folding bikes. I had two Montague bikes for years (which I still have), but last year I bought a Phantom X Electric. (http://snipurl.com/2492tfw).

What a great bike. She folds so nicely that it’s easy to put inside my Prius as well. Seven speeds plus the electric for the same $1100 or so of the others. It won’t fit a Mooney, but it’s a real bike.

VG Fan
I was really taken with your article on VGs in the June 2012 issue. I put them on my first Cessna 310 over 25 years ago. Checking them out, I feathered the right engine, put full power on the left and pulled into a steep climb. Pulled until the airplane stalled at about 5 knots slower than before.

I still had positive aileron and rudder control. The stall was smooth, straight ahead. Next, restarted the right engine, let it warm up, shut down the left and repeated the process with the same results.

I was really impressed and pleased with my decision to install them. Since then, I’ve been a real advocate and have even proposed that there be an AD to require them on all light twins. I still feel that way. I hope your article makes a believer out of more people. Could save a lot of lives.

I read with great interest the May article on angle of attack indicators. I have an Alpha Systems AOA system installed in my Grumman Tiger, that is, until a zealous FAA Inspector forced its removal during my January 2012 annual inspection. His “argument” was that it did not have PMA approval and therefore was not legal in any certified aircraft.

The AOA was installed in January 2010. It didn’t take long to fall in love with this device. I routinely fly into strips as short as 1600 feet. The LED bar graph mounted on the  glareshield is pretty close to heads-up display position and allows me to focus on the runway ahead—without having to glance away at the ASI.

I have found the AOA to be consistently accurate every time when indicating the stall in all phases of flight. It wasn’t until the unit was removed that I discovered the true value of having it, especially on night landings.

I, in fact we, have Mark Korin of Alpha Systems to thank for pushing through the FAA to obtain approval for his device in certified aircraft. After reading the article in May, I contacted the inspector at the local FSDO. After two weeks of waiting, here is an excerpt from his written response.

“The FAA Small Aircraft Directorate has declared the [Alpha] AOA system installation to be a minor alteration and it does not require any production or design approval. Should you choose to have the system reinstalled, be sure the installation complies with Part 43.9 and 43.13(a).”

I wholeheartedly agree with Jeff Van West’s conclusion that AOA systems are worth it. I made an appointment with the avionics shop the same day I received the official okey-dokey from the FAA.

Sumps and Pumps
In your story on the Citabria and Decathlon, the statements on the fuel system were incorrect. The 2004 Citabria 7GCBC I own has four sumps and my Lycoming O-320 doesn’t have a boost pump; only fuel-injected Lycomings have boost pumps.

Huskies Rule
Great story on the Husky in the June issue. Coincidentally, I have had some contact with Husky aircraft in the past couple of weeks. And while you were able to fly the new model with new landing gear, I tried the older version.

The Idaho Aviation Trade Show in late May featured a brand new, fully tricked-out A-1C Husky with every goody imaginable, for $336,000. Although, as your article pointed out, most new Husky aircraft sell for nearly $100,000 less, I thought the price was a bit steep for a two-seat aircraft.

The next day found us at Alpine Airpark, Wyoming, home to 14 Husky aircraft at latest count. One resident had just taken delivery of an airplane equal to the one we saw at the trade show. We each got a ride in a 2008 model Husky during a three-ship formation flight through nearby canyons and mountains.

At the end of the flight, my PIC, an ex-Air Force instructor, greased the landing on the groomed grass strip. Because I had been taking photos, I had forgotten about the gear. Sure enough, after the smooth touchdown, we boinged up and down several times as though riding on bungee cords, which we essentially were. Had the pilot come down harder, I’m sure we would have temporarily departed the ground for a second “landing,” the famous taildragger bounce.

The following day we visited the Aviat factory in nearby Afton, Wyoming and made an extensive, half-day examination of the manufacturing facilities, accompanied by Aviat President/CEO Stu Horn, who bought the company in 1996.

The extensive quality control of raw materials, in-house production of parts, new technologies and constant refinement of the finished product makes it clear to me that a refurbished Super Cub cannot compare to a new Husky. My opinion evolved from Husky is “expensive” to wondering how can Aviat make a profit with all they put into each airplane?

For instance, the proprietary techniques and materials involving 14 layers of dope and then paint with sanding between each coat, for a perfectly smooth surface and mirror shine on a fabric-covered aircraft. Horn wanted to take us for a ride in a just-completed Husky to test out the new gear, but the plane wasn’t quite finished and we had another engagement.

The following day, however, my PIC in the 2008 Husky did fly that new aircraft with new gear, 200-HP fuel-injected engine and glass panel. He reported “improved visibility over the nose, how quiet it is and the effectiveness of the gear system, although he remains loyal to his “old friend.”