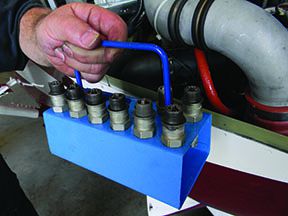 The Zen of Spark
I maintain 13 airplanes for a flying club averaging 500 hours monthly. We have transitioned to Tempest plugs, having used Champions for 50 years. The reasons are exactly as you outlined. Center electrode cracking was getting annoyingly significant, but the real straw on the camel’s back was the resistance issue. Both have been completely solved by changing plug brands.

High resistance was showing up as hard starting, primarily on our 152 training fleet, and to a lesser degree on our Warrior fleet. We first noticed it several years ago on a newly overhauled engine with new Champion REM37BY plugs. Within 150 hours, it was almost impossible to start, although once it did start it ran just fine.
Troubleshooting eliminated all other engine and mag problems. When we finally changed out the plugs with new (Champions), it started instantly. Two hundred hours later, it was back to burning up the starter. At the time, I heard that Cirrus owners were having similar problems.

We then began having the same problem with the other three Cessna 152s. It was solved with new plugs.
That caused us to start checking the resistance in the plugs. We immediately had to discard many Champion plugs with resistance of over 15,000 ohms. We have gone to Tempest plugs and have completely eliminated the problem.

I own and operate a Beech Duke. GAMIjectors are not offered for the 380 HP turbocharged, intercooled Lycomings installed. I use a very nice engine monitor, do not run LOP and do no shock cool. I can promise you that the plugs I have dropped—and I have dropped a few over the years just as everyone has—I have thrown out with a tear in each eye.

Two years ago, I found one Champion fine wire with half of the insulator missing. My fear was the damage it may have caused to my turbocharger vanes on its way out. CHTs were normal, so I failed to consider the more damaging detonation issue. This year I found another fine wire Champion with half the insulator missing and yet another with a cracked insulator that was only seen under the magnifying lamp at my spark plug cleaning/gapping station.

These incidents were on different cylinders and not on the same engine. After reading your article, I say with a gasp in my spark plug replacement checkbook, all Champions—fine wire or not—are being replaced with Tempest massives.

I strongly recommend focusing the investigation on material, engineering and manufacturing processes at Champion, not on operating conditions. Find the differences between the two companies’ plugs and you will find the guilty component.

In a sidebar to your spark plug article you quoted Champion’s Kevin Gallagher as stating that measuring resistance on a 9-volt ohmmeter doesn’t give a true reading of the resistor’s performance. To the contrary, Military Spec MIL-S-7886B, Section 4.7.2 states, “Each spark plug shall be checked for stability of internal resistance and contact measurement of the center wire resistance by use of a low voltage ohmmeter (8 volts or less).”

Supplemental Oxygen
In reading your November 2012 article on oxygen systems I ran across, “The FAA requires using a mask instead of a cannula above FL180.”

I’ve read this many times, but it is not in the FAR Part 91 regarding operations. It only appears in the FARs in Part 23, which applies to aircraft certification, and then requires a mask be provided for systems used above FL180. It says nothing about what a pilot or passenger must use.

There is not a limit of FL180 for passenger or pilot use in operational sections of the FARs.
With a reservoir cannula and pulse oximeter, there is no reason a cannula cannot safely be used above FL 180.

Correction
In the Garmin G500 versus G600 article, July 2012 Aviation Consumer, we included the L-3 WX500 as an available remote input. Garmin tells us the interface won’t work yet, but it will with a future software release, expected later next year.

Our advice to those installing these two systems—have your shop add the data wires now so they won’t have to tear the installation open again next year.