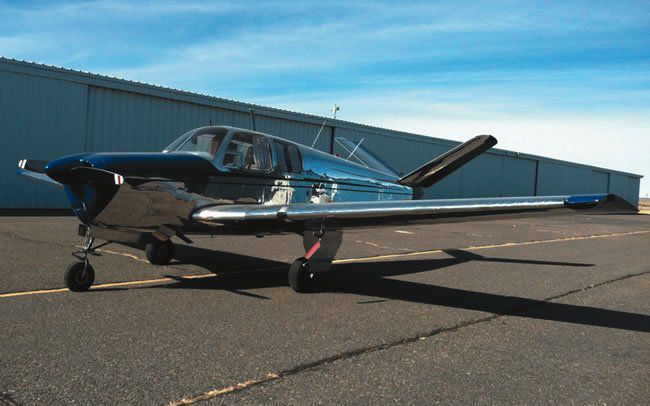 BONANZA 35 NITS
I just read with much interest your review of the Beech 35 series in the November 2014 issue of Aviation Consumer. My family and I owned an A35 for 10 years (thats it in the lower photo), having sold it for upgrade to an A36. I tend to agree with most of your points, with a few exceptions and critical points you left out.

Im not sure where everyone gets the idea the 35 Bonanza has an aft CG issue. In the time we had ours, I never had a loading problem, even with the fuselage-contained 20-gallon auxiliary fuel tank.
Regarding your reporting of the Bonanzas tail-wagging tendencies, this must be one of those it-will-never-be-resolved issues. Again, we never had a problem. In fact, from my experience it is no worse than any other aircraft, Beech or not.

On the tail cuff front, I should point out only the big tails (C-models and later) got the cuff; the small tails didnt need them, though the tail AD is still pretty extensive.

Corrosion is most definitely a big deal, especially in the older airframes. Im not sure when Beech started to prime the parts, but our A35 had no zinc chromate or other primer applied to the structure, although there is alclad aluminum. We paid dearly for that lack of protection. In the first 18 months we owned ours, it sat outside in the benign Florida climate. We replaced the entire belly (short of the spars) from the rudder pedals to the aft cabin bulkhead due to corrosion.

Last, buyers should be cautious of modified panels. In the ones with piano-key panels, the outer panel is structural and supports the control quadrant. Panel mods are pricey if maintaining the original Art Deco look is important. Keep up your great work.

Experienced Bonanza owners we spoke with all seem to agree that all of the 35-series Bonanzas were easy to load to an aft CG, especially early models. Its also true for the older straight-tail models, including the Debonair.

One owner noted that the CG moves back as fuel is burned. If you start with two passengers in the back, plus a bag or two in the baggage compartment, and fly for a couple of hours, you will likely land with an aft CG.

EARLOBE OXIMETERS
In Larry Anglisanos November 2014 First Word commentary, he wished for a tiny and untethered arterial sensor for keeping constant track of his oxygen saturation during flight.

For those not wedded to over-the-ear headphones (and perhaps even for some that are), an earlobe sensor could fulfill the need, although I have no idea whether such a thing exists. But dont thank me. Thank science fiction author Robert Heinlein for the idea in Have Spacesuit-Will Travel.

They do exist, or at least they used to, Don. We stumbled upon earlobe sensors when conducting the research and learned that sampling oxygen saturation levels at the earlobe isnt even a practice used in clinical settings anymore. Ear sensors have been replaced almost entirely with more modern fingertip devices.

RUBE GOLDBERG ADS-B
Why are manufacturers going off in different directions with different ways to execute ADS-B? If you use Garmin ADS-B equipment, its going to be expensive. In fact, almost everyone is trying to make it extremely expensive. Why cant manufacturers just have a GPS built into an altitude encoder and let that be the end of it? All you would have to do is add one more antenna and trade out your altitude encoder. ADS-B Out should not be difficult.

The Rube Goldberg approach the industry is taking toward ADS-B equipage is why youre looking at a mass exodus from general aviation. Please take a sensible look at this.

Actually, we think Garmin deserves credit for offering a wide variety of ADS-B solutions at various price points, depending on capability. It recently presented a minimally intrusive approach to mandate-approved ADS-B Out with the $3995 dual-band GDL84. It works with the companys Flight Stream Bluetooth wireless cockpit interface and enables ADS-B traffic and weather display on a tablet device. The benefit is that it doesnt require panel modification, a dedicated display or a control head. But, it doesnt solve the dilemma you point out, since it doesnt have a mandate-approved integral WAAS GPS. Well evaluate the system in an upcoming issue.

At AirVenture 2014, Appareo-the company that make the Stratus portable ADS-B receiver-showed a prototype ADS-B Out transponder that has an integral WAAS GPS, plus it can interface directly with the companys portable ADS-B unit. Its price is unknown.