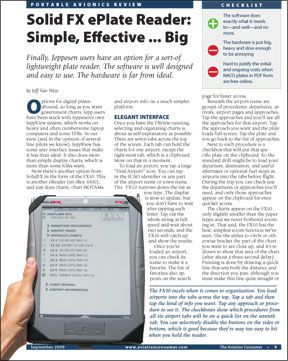 I have read with interest your comments on the SolidFX. (See Aviation Consumer, September 2009.) I was able to see this in person at Oshkosh and would have bought it save the price. I was very impressed by the unit. To me, it seemed fast enough and the zoom feature was very clever and easy to use.

The bottom line for pilots outside the USA is that we dont actually have any other choices for a paperless cockpit save JeppView. And the charts for SolidFX for all of Australia are only $140/year. I might have just convinced myself to buy this.

Id also like to comment on the Garmin 695/696. I own a 695 and in nearly every way love this GPS. The screen is fantastic and with the serial input tied to my panel-mounted IFR GPS, the combination is about as good as it gets, unless you are lucky enough to own an all-glass airplane.

My gripe is that there is only one serial input and that you must make a software adjustment involving four button pushes and three twists to modify the input! In my case, I also have a Zaon XRX that must rely on the same serial input. I made up a simple A/B switch to cycle the inputs, but the need to burrow so deeply into the software is really annoying.

Garmin could rectify this easily with a software update; there are unused soft keys that could allow for a rapid change of the serial input type. I tried to speak to some Garmin techs at Oshkosh about this, but I felt like nobody was interested.

Finally, Id like to ask a question about the Garmin aviation protocol. The question springs from a big annoyance with the uploading of flightplans generated on a computer into all the Garmin portables through the USB port.

The uploading works brilliantly until the realization hits that all the uploaded waypoints are seen by the Garmin as user waypoints, even when they have the exact identifier and coordinates as the Jeppesen database in the GPS. As user waypoints, many of the best features of the Garmin simply dont work.

User waypoints will not show any data on the waypoint and the GPS will not know that there are approaches available. This is a rather sad situation as one of the great joys of the portables is that you can flight plan at home, load the GPS and be ready to go. This user waypoint problem is a rather big obstacle, and in my view makes the USB uploading rather pointless.

But then I thought about how beautifully my panel-mounted Garmin can communicate with the portable. Waypoints are sent as real waypoints and flightplans transfer seamlessly through the aviation protocol. My hope is that some clever flightplan designer will figure out a way to upload a flightplan from the computer into the serial port using some scheme that mimics the Garmin aviation protocol.

I read with interest Pete VerLees “Telex Beef” in the January issue, since I have had a similar experience with Lowrance Electronics. In July of 2007, while completing the panel for our new experimental, I installed a Lowrance 2000C GPS.

In January 2009, we had some problems with the unit and we returned it to Lowrance for repairs. We did not get the unit back until mid-May 2009, but with a six-month warranty. Returning from the Copperstate Fly-in in October 2009, the unit began to show problems with the display.

I called the Lowrance service line. I was told that Lowrance was leaving the aviation market completely, but that since my unit was still under warranty, they would replace it. I was also told to expedite returning it. And further, I was told that Lowrance would no longer support any of their aviation products that have been sold over the last 10 years. An aviation GPS without a current database is rapidly getting useless.

I have no qualms about a manufacturer deciding to leave a market. But I do have concerns, indeed anger, when I am told that the upkeep of what I purchased in good faith will no longer be offered. In this case, I sent a letter to the parent company that owns Lowrance and of course have not been given the courtesy of a reply.

Oh, one other thing. I sent the 2000C to Lowrance on November 3, 2009, via UPS with an RMA as instructed. As of today (January 2, 2010) I have not received any confirmation other than my completed tracking number from UPS. Finally, like many in aviation, I also have an interest in boating. While

Lowrance is the largest marine electronics supplier, any guess as to my future purchases?

I fly a Europa XS experimental which has a fairly small cockpit. While I have a Grand Rapids Technology EFIS installed, I still prefer to have a sectional chart or low-altitude enroute chart available and of course I use approach plates.

None of these are available on the current versions of EFIS. Having a chart with the aircraft position shown real time would be a bonus!

I have looked at the planning software and the in-cockpit features they offer and most seem to have what Im looking for. But the tablets are a little big for my cockpit. About the best at this time is a Samsung Q1.

However, there is a new tablet on the market, the Viliv X70 (see http://snipurl.com/tyhdw) which is small and looks very attractive for this use. Recent ads by Anywhere Map show a similar tablet in use.

So my question or request is please address this application in the follow-on article and please include the Viliv X70 or any other new tablet in the review.

Well look into it when we get around to EFBs again.