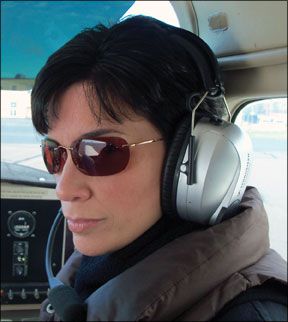 Sunglasses (see December 2010 Aviation Consumer) are always a great subject. I purchased Veldalo Titanium sunglasses a few years ago after reading about them in Aviation Consumer. This was my first encounter with copper-rose (Blue

Blockers) sunglasses and I loved them. They worked best at twilight, amplifying contrast. A problem I had was my glass cockpit displays, which had a washed-out look.

I got a pair of free glasses at the last Consumer Electronics show in Las Vegas. While the glasses look funky to my friends, they work great, are comfortable and let me view my glass panel with no problems.

I still use the Veldalo glasses for driving and skiing. Not only do they cut glare and enhance contrast, they are very comfortable and look great. Customer service is also excellent. When a hinge broke over a year after I purchased them, Veldalo replaced them at no cost.

Thanks very much for your very fair comparison between Spidertracks and SPOT in the last issue. You got to the nub of the issue-we are more expensive but you really do get what you pay for.

However, there were a couple of things you may not have realized, which I felt compelled to point out.

The key thing is that we are much more than just a personal locator-type system.

While we do offer this active monitoring as a pilot-activated option during flight, the S3 model, designed specifically for GA/recreational-type pilots comes with Spiderwatch active monitoring turned on as standard.

This puts us squarely in the category as a potential replacement for an ELT, rather than just another tracking system and to us this is pretty important. As Im sure you are well aware, ELTs have a very poor track record. The 121.5 MHz ELTs failed to transmit in over 75 percent of accidents in the U.S. during the 1990s. From our experience in New Zealand, 406 MHz ELTs have no better success rate.

Youre right, we dont claim we operate like an ELT. We claim ELT technology is redundant and fourth generation tracking-based location systems like ours are the future for locating downed aircraft.

A couple of other key points which can make all the difference to the pilot are: Were two way, so the user can see the message has gotten through, which makes a big difference if youre in the middle of nowhere and have no other way of knowing whether your SOS has been sent.

You picked up on the importance of the two-minute versus the 10-minute update rate-crucial if you are flying at 100 knots or more if you want a small defined search area.

And another key feature we offer is the automatic texts or e-mails that can be sent to the pilots nominated recipients automatically when the aircraft accelerates through 40 knots with Spiderwatch activated and when the airplane lands and/or Spiderwatch is turned off.

Ive been reading your reviews of various advanced instrumentation for aircraft, like the “Glass for LSAs” in the November 2010 issue and have yet to see any mention of a feature Ive been expecting, but never seen in aircraft instrumentation: Display of values varying over time to allow easy identification of adverse trends.

In a prior career, I worked in a nuclear power plant and before that on Navy submarines. For various critical parameters (such as oil pressure supplied to the turbines) we had an instrument which had a pen connected to the display, so that not only was the current value displayed, but we could also look at a paper chart that spooled by under the pen, to see how the value had changed over time.

This made a slow change in the value much more apparent; one did not have to memorize the current value for current conditions, but could just look for adverse trends, allowing attention to be given even if the value of the parameter had not yet changed to an alarm set point.

Certainly, on many flights, there are parameters which never settle down to a steady state value, due to rapid changes in engine speed, altitude and so on.

However, there are other flights where parameters do settle down to a steady state value and an inflection in a trend line is a much-easier-to-see warning of an incipient problem than a change of a value from near the top of allowable values to near the bottom of allowable values over the course of several panel scans.

Such a feature could be easily implemented in a video display, but I am unaware of any offerings in this regard. The closest Ive seen is the ability to download historical information from some instruments after a flight and display it graphically on a computer.

Are you aware of any instrumentation with this capability for general aviation aircraft?

Actually, some glass systems do have trend lines. For example, some of the systems include in their tape displays for variables such as altitude and airspeed, a magenta secondary tape that shows directionality and vector of the trend. Furthermore, path or vector indicators are becoming more common and these are also a form of trend indicator in that they show where the aircraft is flying irrespective of which direction its pointed.

We agree that engine trends would be a nice-to-have, but we dont know of any system that displays this in real time.

iPad Letter of the Month

Your thoughts about the iPad were right on. (See November and December 2010 Aviation Consumer.) I learned through experience that the brightness can be adjusted… turned to full bright, the iPad is easy to read in a sunny cockpit, but pros tell me that reduces battery life by about 25 percent.

But then, as you pointed out, cheap charging cords running off 24- or 12-volt outlets are the answer. I suspect that turning down the brightness would be great at night, although I havent yet tried it. I love my iPad and Foreflight!