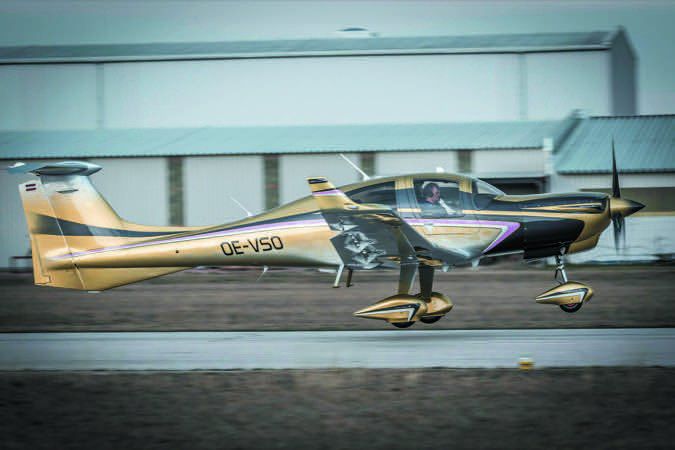 I read the report on the Diamond DA50 in the June 2017 Aviation Consumer with interest. Diamond is ambitious and impressive. I also notice that the DA50 has a steerable nosegear.

As a current Diamond DA40 owner who has experienced a pilot seat sliding backward in the seat rails while climbing out (in a Cessna), I very much appreciate the non-moving seats in my Diamond. The airplane came with a three-point seatbelt airbag and overall seems like an extremely crashworthy machine.

As for whole-airplane parachutes, I’ve given quite a bit of instruction in a Flight Design CT LSA and once found the sky ahead filled with seagulls and wondered if I would shortly need to pull the red handle, but I’m ambivalent about it when I’m flying the Diamond. For me, the cost of servicing the CAPS in the Cirrus was one of the negatives in buying a used one.

Will Hubin
via email

In your recent Diamond coverage you touched upon a pretty important point that could eventually give Diamond an advantage over Cirrus, and that’s autonomy.

As you pointed out, Diamond has being flying with an autoland system in the DA42. As a charter pilot who has dealt with my share of skeptical passengers, the idea of an airplane being able to land itself could have more credibility than a whole-airplane parachute, which on the surface is pretty crude by comparison.

More On The Cessna CJ2+

As a longtime Aviation Consumer subscriber and the owner of a 2008 Cessna CJ2+ light jet, I agree with your conclusion in the HondaJet article sidebar (July 2017 issue) that the CJ2+ is a great value in the used light jet market.

As for the Alpine Edition, Cessna announced it for the CJ2+, but to date has not had it certified. The company had one demo Alpine Edition CJ2+ flying, but none have been delivered to customers.

What was not mentioned is that Rockwell Collins recently certified and completed the first customer deliveries of the Proline Fusion in the Cessna CJ3. It is expected that the company will next be working on a certified Fusion interface for the CJ2+. The expected cost is around $350,000 and the Proline Fusion has ADS-B and WAAS LPV capability as standard equipment.

The cockpit picture you used in the article was an older CJ2 panel with Garmin GNS530. The CJ2+ has Proline 21 avionics and the FMS3000 nav system.

Sorry, but after reading Jim Cavanagh’s article in the July 2017 Aviation Consumer about the Champion SlickStart ignition booster, I don’t get it. I have owned three turbocharged Piper Aerostars—a 601P, 602P and a 700P—and all three of them had the will-not-start-when-hot problem. In the summer, I timed my fuel stops with long lunches.

Finally, by the time I owned the 700P there was a solution: a better starter. As an electrical engineer, it was clear to me that if the starter turned the ignition faster, the built-in stock magneto would put out more spark. A quick search found Sky-Tec starters, which work on normal and counter-rotating engines.

I found that since they spin so fast, my hot and cold starting problems were gone. My point is why further complicate last century’s design with an unnecessary bandage. The engine simply needs a modern starter. I have no affiliation with Sky-Tec (and Hartzell Engine Technologies)—I’ve never even spoken with the company. I simply bought its starters and found that they just worked for me.

Perhaps there should be another article that digs deeper into my theory.

We’ve heard similar stories from other readers, but also from ones who have fast-turning starters and still have problems with hot starts. We’ll dig deeper in an upcoming article. While the iStart product isn’t an ignition booster, product developer Damon Berry weighed in.

“Engines with very slow-turning Delco starters may be part of the problem and might benefit from a faster turn rate because there is prop momentum carrying it through when there is uneven cylinder firing at the beginning of a start sequence,” he said.

Remember that the real problem with hot starts is not necessarily getting it to fire, but instead getting it to keep running after it starts. A faster spinning starter won’t be much help.