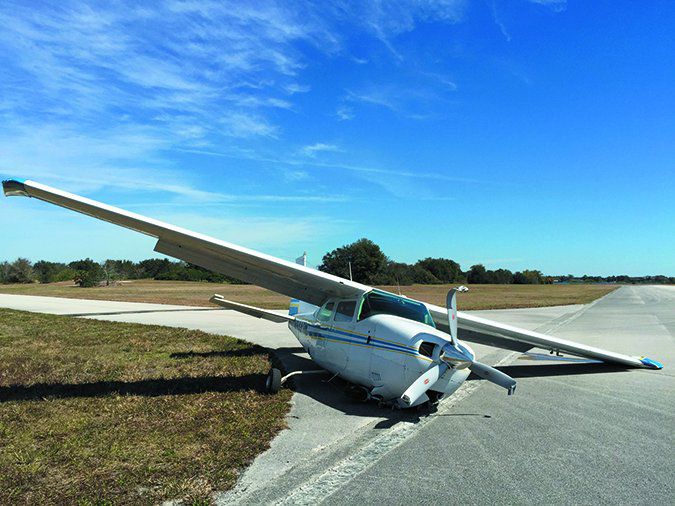 I enjoyed reading the article on landing gear checks in the February 2017 issue of Aviation Consumer.

A critical (but simple) ground check you did not mention is when examining the through-bolts holding the nosewheel scissors to the airplane, put a wrench on the bolt head and turn it. If the bolt is straight then the scissors will not move, but if it’s bent you will see the scissors move up and down as the bolt rotates.

According to my IA, if you catch this early it’s pretty easy for a tech to remove and replace the bolt, but if it’s too far bent, as he saw on a Cessna 182 he’d recently worked on, he has to remove the nosegear assembly and get the bolt out using a press. I was lucky because he was able to replace the bolt on my Cardinal RG without having to take anything apart.

Thanks to Keith Peterson of the Cardinal Flyers Organization for teaching me this simple and money-saving examination.

You guys offered a great service with your recent landing gear inspection and upkeep article. Unfortunately, I wasn’t specific enough when I was doing a prepurchase inspection on my Cessna 210.

While I was lucky enough to not experience a landing gear failure, a closer inspection would have saved me thousands of dollars in repairs during the first 50 hours of ownership. I ended up replacing numerous major components, including the power pack and critical parts associated with the downlock system. Moral of the story: Use a mechanic who knows the system inside out.

I loved the review of the various portable oxygen systems in the January 2017 issue of Aviation Consumer and I’m preparing to assemble a kit.

I have two questions: Can a cannula from one vendor be used with a regulator from another? Are the parts interchangeable between brands?

Second, are the portable oxygen concentrators feasible for use in our aircraft instead of bottled oxygen, say at altitudes up to 16,000 feet? Keep up your good work.

To our knowledge, you can use a cannula from one vendor with a regulator from another. The positive crosscheck on any installation is monitoring your blood oxygenation level with a high-quality pulse oximeter.

We have not done any testing of portable oxygen concentrators in aircraft. Several years ago we looked at one that was designed for aircraft, but we declined to put it in an airplane and test it due to some technical issues the mechanic who was going to do the installation pointed out to us. Most portable units require a 110-volt power supply and you’ll need to consider the amperage draw before installing it. If anyone has experience in this area, we want to know about it.

Does Garmin explain why it only provides the FliteCharts update two days before activation? This is often quite inconvenient. Other vendors of chart information (including ForeFlight) are able to provide updates a week in advance of the update’s activation.

Garmin explains: Garmin provides FliteChart data as soon as we can guarantee it will be available, which is about two days prior to its effective date. The FAA provides Garmin the chart data several days prior to the new charts becoming effective. From there, our cartographers verify and check the data and assemble it for dissemination across multiple avionics platforms and portable devices—a process that takes multiple days. Luckily, all other databases available on flyGarmin.com are available seven days before they are effective, including the navigation database, which makes the navigator legal for IFR flight.

I recently read the article you ran in the August 2016 Aviation Consumer on aircraft checklist apps. You draw sensible conclusions about the value of voice operation.

You might find that the VoxChecklist app comes close to what you are looking for. There is a free trial available, but at the present time it is only compatible with Android devices.

It did occur to me that once airborne, shouldn’t the pilot have committed all inflight procedures to memory and rehearsed them until they are second nature?

Using memorization may work for some, but we think it’s asking for trouble in more complex aircraft.