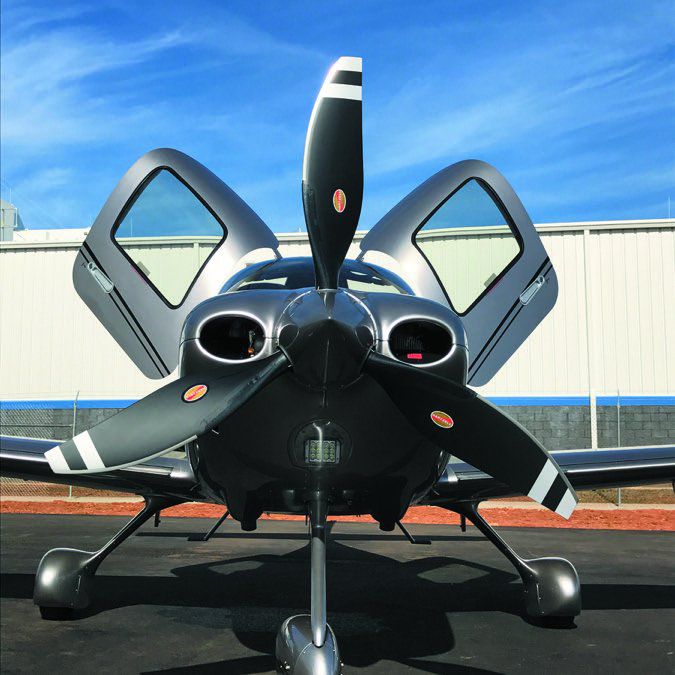 After reading about three-blade prop upgrades in the April 2018 Aviation Consumer, I thought I would share my upgrade experience. After converting my elliptical prop tips to square tips by touching a runway at speed, I decided to change to a three-blade prop for my Mooney 231—not for the looks—but to have less noise and vibration without a performance penalty.

The change was from the standard two-blade McCauley to a three-blade McCauley Black Magic. While I considered an MT composite and also a Hartzell, I saw no compelling reason to buy them. The three-blade prop was perfectly balanced upon installation and had markedly less vibration. Interior screws no longer work their way out of the overhead panels, plus the three-blade prop is markedly quieter. I used to wear ear plugs in both ears under my noise-cancelling headset. It’s not as quiet as my glider, but at least now I don’t need the earplugs.

The climb performance with three blades is markedly improved by about 30 percent and the performance ceiling is also improved. I don’t yet know just how much because at FL220 we were still climbing at 500 FPM, but my oxygen was inadequate to go higher. With the two-blade prop, climb petered out about FL210 and the engine would get hot.

I’ve found that the cruise performance is about the same as the two-blade propeller. The McCauley tech rep said, “You can expect the performance to be about one to two knots slower than published book speeds below 7000 feet, and one to two knots faster above 12,000 feet.” I do not have precise instrumentation to confirm, but it is definitely not slower.

These results may be slightly affected by replacing one mag with an EIS electronic ignition, which has been wonderful for smooth operation and cooler EGTs, plus it is likely the main reason for the improved service ceiling.

As you note, two variables changed at once: the propeller upgrade and the ignition upgrade. The performance boost you report could well be the result of the electronic ignition. We cover this topic extensively starting on page four of this issue.

I wonder if you guys were drinking the marketing Kool-Aid when you wrote the used single-engine turboprop comparison article in the March 2018 Aviation Consumer. In it you wrote: “The most recent 850-HP TBM 930 will smoke along at 328 knots at FL260, with VFR range over 1200 NM.” How did that sentence get past your editors? Pass it around and see if they can spot the mistake. Hint: You can’t fly VFR at FL260.

You publish the NBAA IFR range for the Pilatus PC-12, so why not for the TBM, too? NBAA IFR range is the standard that should be used for any pressurized aircraft.

While an aircraft flying at FL260 must be on an instrument clearance, the fuel it’s required to carry for the flight is based on FAR 91.151 and 91.167. For a day flight in which the destination meets the requirements of 91.167, the flight need only comply with the 30-minute VFR fuel requirements even though it is on an IFR flight plan and clearance. NBAA range is often used in making aircraft comparisons, yet it’s interesting to see what the range is when the destination is VFR and meets 91.167, so an alternate airport is not required—as is the case for what we understand to be the majority of flights on instrument flight plans.

We’ve also noted in our reviews of pressurized aircraft that the actual fuel consumption, speed and range are almost invariably as good as (or slightly better than) the numbers published by the manufacturers. In a review of one of the TBM series the actual cruise performance beat the book numbers.

We’re well aware of the constant battle between marketing and engineering over performance data, and that sometimes marketing wins. It’s why we do our best to publish real performance numbers when we do aircraft reviews.

I’m sorry to be so dimwitted. I’m sure Paul Bertorelli explained it well enough in his LSA float training article in the April 2018 Aviation Consumer for everyone else to understand, but not me.

I have a private pilot certificate with a single-engine land rating. If I take instruction in a Searey LSA and opt for the formal FAA single-engine sea rating, am I then qualified to fly a Piper Cub or a Cessna 172 on floats, to name two examples?

Yes. While the training is essentially the same for a sport pilot seaplane add-on as it is for SES privileges, you’ll do the checkride for a SES rating with a designated pilot examiner. You’ll ride with an instructor and write a smaller check for the sport pilot seaplane endorsement.