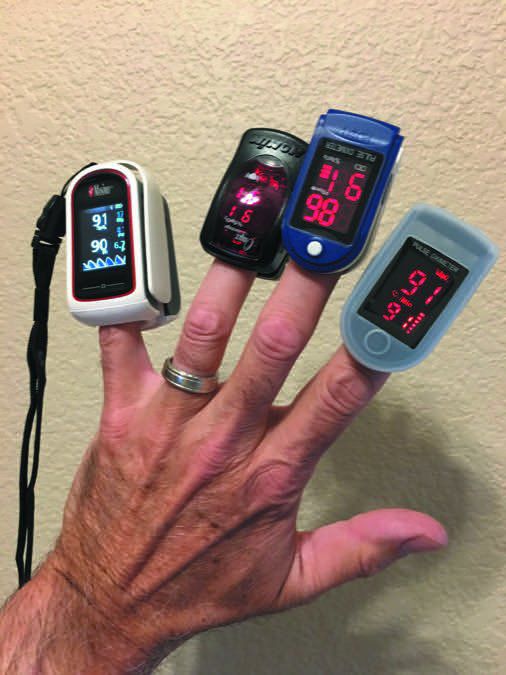 Great article on pulse oximeters in the September 2017 issue of Aviation Consumer. I have been using them for almost two decades and keep one in my turbocharged Bonanza and another in my glider. I routinely fly in the teens and I always insist that passengers use the pulse oximeter every half hour or so just as I do.

The cheaper models seem to work as well as the more expensive models, as you found, but two comments should be added. First, some smartphones do just as good a job. My Samsung Galaxy S7 is one example. It has a pulse oximeter feature and many other health monitoring metrics. I found that it calibrates very well against my two dedicated pulse oximeter units and it records the readings over time.

Also, I want to pick up on what you wrote about the NTSB records and the lack of credible data on how serious the hypoxia safety issue is. From soaring in the West, where altitudes are almost always in the teens, I can recall a long list of accidents where a very experienced and careful pilot got into trouble and/or died due to bad piloting with no apparent reason for the lapse in good judgment. I have a hunch that the issue is vastly understated as a safety issue, as you indicate.

I would suggest you strongly recommend your readers sign up for an altitude chamber “ride” to get to know their personal symptoms and tolerance for hypoxia. The FAA has a new traveling road show called PROTE. I wrote a complete article about it in a recent Soaring magazine. It is a small office-type structure that can hold about eight trainees and instead of reducing pressure to emulate 25,000 feet MSL as do the full-on pressure chambers, it replaces much of the oxygen in the air with inert nitrogen to simulate 29,000 feet MSL with respect to available oxygen in the air. The portability of this device makes it attractive for offering it all around the country, but it has a serious downfall, in my opinion. The ride lasts just five to six minutes due to being instantly immersed in extreme hypoxia conditions at 29,000 feet. For flying in small unpressurized planes, the much greater risk is the insidious onset due to failed supplemental oxygen equipment, or the belief that you are only in the teens of altitude and don’t need to worry.

The other limitation of the PROTE chamber is that the FAA mandates users hold a current medical or BasicMed certification, which shuts out non-pilot passengers and LSA and glider pilots who don’t have to fly with a medical. One solution may be to offer PROTE at 20,000 feet MSL for passengers and pilots of non-pressurized aircraft to better emulate the subtle onset of hypoxia over a longer immersion time.

Last, I lobbied the FAA department responsible for this safety area and was met with a tin ear and total insensitivity to the points I explained here. Perhaps Aviation Consumer can address this in a future article and make some headway for the safety of our industry.

We’ll indeed look at the FAA’s PROTE program in a future issue.

I think that there is a richer selection of radios than was presented in the navcomm roundup article in the August 2017 issue of Aviation Consumer. Perhaps if the intention was to cover navcomm radios only, then the selection would be somewhat limited. But the article did cover some comm-only options.

I’d like to comment on Becker Avionics. I happen to own a pair of Becker 3201 comm transceivers in my Extra. These are ancient radios dating back to the late 1980s and my two transceivers function well even after all these years.

While I am happy with their performance, a few years back I had to service both of them. Specifically, the NiCd batteries that preserve the frequency presets were dying, which was not at all unexpected. What I did not anticipate was the level of difficulty I encountered obtaining proper replacement batteries. My experience tells me that the older radios are not enthusiastically supported here in the U.S. I eventually found a place in Pennsylvania that could sell me the correct batteries. I could not get a response from Becker USA in Florida.

For me the lesson is that among other things, I’d check into the company’s willingness or ability to service older equipment.

In the article we covered all navcomm gear approved for installation in certified aircraft, but didn’t hit some models intended for experimentals. For those, we suggest reading the May 2016 issue of sister publication Kitplanes magazine.

As for Becker, it’s trying to improve the support of its older gear partly with an online service request form so you’ll know ahead of time if parts are available or not. Contact www.beckerusa.com.