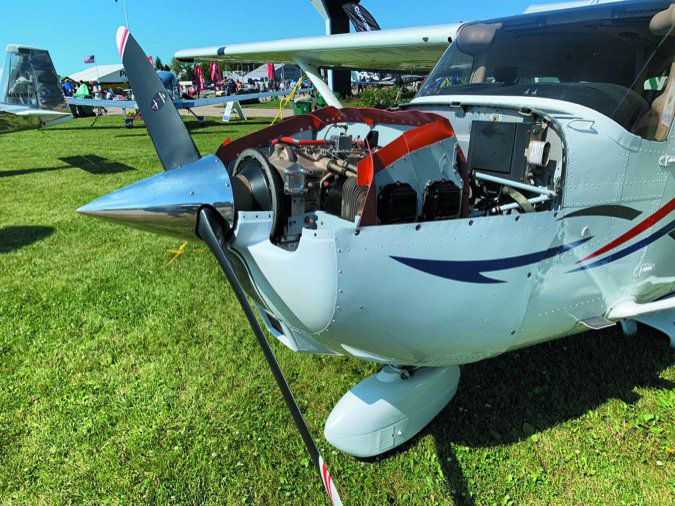 I noticed that Continental just announced a drop-in replacement engine for the Lycoming IO-360 engine that’s in later-model Cessna Skyhawks. I own two of these airplanes (one is on a leaseback to a busy flying school) and what got my attention was Continental’s claim of a longer TBO with high usage. What does the manufacturer consider high usage and do you know anything about this engine?

Thanks for your consistant excellent work-I’m a lifetime subscriber.

The Continental engine you’re referring to is the new Prime IO-370-D3A3. The company was showing it off in a Skyhawk at AirVenture last month. It’s 180 HP, STC’d (for Cessna 172R/S models), has a Bendix impulse-coupled ignition, includes roller tappets and has a price of $27,226.

As for the TBO, the recommended is 2200, but that extends to 2400 for what Continental calls high-utilization aircraft. Typically these are aircraft that fly more than 40 hours per month. Continental’s Service Information Letter SIL98-9C is worth reading because it addresses recommended TBO periods based on the engine model and a variety of operational factors, including high usage.

I see that Continental has an STC’d Prime IO-370 for some Cessna Skyhawk models. Will there be an STC for older Piper PA-28 models like the 180 and 181?

Actually, we asked a Continental rep at AirVenture the same question and didn’t really get a definitive answer. But as he pointed out, the 180-HP Continental Prime IO-370-D3A will be used on Piper’s new 100-series two-seat trainer, which is essentially a PA-28. Keep watching.

I wish you guys ran that digital fuel sensor article (August 2019 Aviation Consumer) last year when I committed to a JPI big-screen engine monitor for my aging Cessna 206. I was already at the threshold of my budget when I pulled the trigger on the engine monitor job, which of course included fuel quantity to replace the bouncing Cessna OEM gauges. After consultation with the shop manager, I could tell that using the existing senders would be a roll of the dice, so we ended up sending them away for a rebuild.

Long story short, the shop couldn’t properly calibrate the system at the end of the job and we ended up replacing them with new digital senders like you described in your article. This added thousands to my invoice. Caveat emptor to others embarking on this project.

Thank you for the useful avionics upgrade article in the August 2019 issue. The article is a huge resource for planning, but I think you understated the cost for even the most basic upgrade no thanks to old wiring.

I ended up with a Garmin G500 TXi retrofit display, plus a GTN 750 GPS and GTX 345 ADS-B transponder in my B55 Baron and let me tell you, it was almost $3000 more than my shop quoted. Most of the overrun was because of old wiring that ultimately got replaced when the shop tried to wire the system into the King KFC200 autopilot. I showed up one day to have a look at the progress and couldn’t believe the rat’s nest of wiring bundles that ran from the nose to the panel.

My suggestion to anyone with an airplane older than 20 years is to get a quote that includes replacing the associated wiring if needed. You’ll be pleasantly surprised that the job might come in under budget and ahead of schedule if it doesn’t need to be replaced. That certainly wasn’t the case with my airplane.

I’m considering stepping out of my turbo Cirrus and into a used turboprop single. Do you plan to scan the market any time soon? If you do I’m hoping it will make me come to my senses. Thanks for a fine publication.