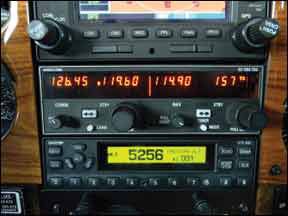 Navcomm Noise
I read your article on navcomms in the December 2011 issue with interest. However, I think there is a bit of a slant toward the all-in-one avionics box with your magazine and I don’t really agree with it.  While I admit that glass is wonderful to replace the attitude and heading indicators (electronic HSIs are even better), I’m not a big fan of GPS-only navigation data. GPS can be jammed, even if it hasn’t happened yet. There is no backup to GPS if the system goes down.

Plus, if an all-in-one box goes down, you have lost your radio, nav radio, GPS and your moving map display.  Maybe this never happens, but I think having a navcomm as a backup is essential and I also think having DME as a backup is a good idea, as well.

I understand that I am a dinosaur in this belief, but I will carry something besides a GPS-based box until I no longer have a choice.

On a side note, give me a navigation box which doesn’t require outside inputs, but can make use of them for position updates, and I will be happy.  I think that Narco had the right idea with its NS9000, which was an RNAV box with GPS tie-in. Admittedly, if the government succeeds in shutting down all other NAVAIDS, this type of box won’t work. But I would rather have something along those lines if I had the option. Can anyone make an affordable INS for GA pilots?

As a Narco Mark 12D owner, I am quite concerned about the future availability of parts, particularly that notorious display. However, it seems incredible to me that there won’t be an aftermarket company that will step in and supply the more important parts.

There must be many thousands out there. After all, somebody must have the source and specs for those parts. Have you looked into this? I have been quite happy with my Mark 12D and my only complaint has been the need to replace the display once. Will there be no Univair for Narco? I sure hope for one.

You didn’t mention the option of just buying a used KX170B and a Bendix/King OBS/CDI.  That’s what I have right below my Garmin 530W and it has performed well.

I even keep a spare KX170B in my house, which I have not needed.  I bet there are lots of KX170Bs around for sale and repairing them is straightforward.

What are the chances of an affordable INS for general aviation? We would say about zero. There’s simply no market. Unfortunately, the same applies for PMA parts for Narco radios. The installed base is large, but the market is drying up. We wouldn’t expect to see it.

Unmasked
I read Paul Bertorelli’s article, “A Tale of Two Engines.” (See First Word, Aviation Consumer, November 2011.) At first I was amazed, as was Paul, at the two-year post-warranty at no charge for his Continental engine repairs by Zephyr Engines.

Aviation Consumer separates itself from other aviation magazines by the lack of potential collusion between good articles on aviation products or services and the absence of advertising revenue by those very same vendors.

There should be no distinction made between advertising or aviation service “favors.” It’s still money either way. The absence of potential money influence is the diaper that gives AC its credibility. I have confidence you will do the right thing.

Accustomed as he is to ubiquitous fame and fawning, unconditional obeisance, Paul Bertorelli has become so jaded as to be incapable of distinguishing a favor from a boiled turnip. Having said this, he offers in his weak defense that our survey files are full of reports of lowly everyday customers being treated similarly and, in all-too-rare displays of noblesse oblige, he occasionally talks to these people.

Top-rated shops like Zephyr, Penn Yan and Mattituck, to name three, often extend such kindnesses to customers. And, oddly, they keep coming back.

We do admit you have a point, however. We intend to have Zephyr invoice the current owner of the airplane.