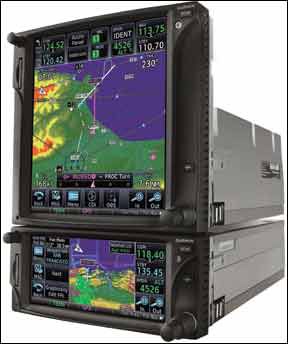 I recently purchased a GTN650 to replace my GNS480. Turns out the STC requires that I have a second GPS/navcomm in order to fly IFR. So I had to go with GTN750, remove the MX20 and SL30 to make room for the 750 and 480. Nobody at Garmin seems to want the public in on this. My avionics tech found out by reading the STC. This applies to composite airframes only. It doesnt make much sense since I have been flying IFR with a single GNS480. Anyway, I had to open the wallet up to the

The PC simulator that comes with the purchase requires quite a bit of RAM and hard drive space to operate. It requires 5GB RAM and 2GB of free disk space. Seems none of my computers have this so Im out of luck.

First let me preface this by saying that Im the owner of a GMX200, GNS480 and GDL 69 combination. I was very interested in looking at the next generation from Garmin and had hoped to see it firsthand at Sun n Fun.

Unfortunately, the weather closed my window of opportunity to make my annual journey south. I was, however, fortunate enough to see a demo conducted by Garmin at a local avionics shop.

I would have to say that I was impressed by the touchscreen capability and the remote control of both the transponder and comm offered by the new series, but I was disappointed to find that it really does not offer any greater functionality than I have today in my current avionics setup.

With the exception of the touchscreen, the ability to drag a route and remote control of the comm, I can pretty much do today everything that these units do, as well as having the higher graphics resolution afforded me in the GMX200.

When looking at this and comparing what capabilities are available today through iPad applications, I cant really see where one can justify spending these high dollars in todays airplanes.

Obviously, provided you have an adequate GPS/comm setup, you can pretty much do everything you want with these units by supplementing them with an iPad.

Without offering a generous trade-in program for your 430/530, I think Garmin is going to find it hard to push these units when there are so many other lower-cost solutions available. What Id really like to see Garmin do is to offer their GX3 PFD for certified aircraft, with an MFD and onboard weather. That should be more than enough to support the glass panel enthusiast in todays marketplace.

Have I Got This Right?

OK (sigh), after clearing out my airplane for its annual and when nearly getting a hernia hoisting the large 35-pound plastic bin full of Jepp plates and charts that I carry all over the U.S., I finally have decided to explore EFB solutions using my daughters newly acquired iPad.

I must say, I am a bit confused. Although it seems simple enough, as there are only three or four really solid providers of apps and data, the confusion comes from my being tripped up as to why the Jepp data is so much more expensive than the NACO data. Im a Jepp guy, always have been, but if Im reading this right, I can get ForeFlight with an annual subscription of NACO charts for $75, but the same in Jepp could cost more than $1000? Im not that much of a Jepp guy!

I know youve covered this in recent issues, but here we are at the cusp of the real travel season and Im not sure what to do. When I look at the price, I have to assume that you get much more with the Jepp. Otherwise, wouldnt Jepp lose all of its GA business? If these products compare favorably outside of the price points, what pilot wouldnt rather use the extra $900-plus for avgas? Help me understand this. What am I missing?

Youre not missing anything. That cost Delta is real and although we think Jepp plates have a superior design and typo-graphy, theyre still just plates.

I saw your article about tiedown stakes at Sun n Fun this year. It was unfortunate that it was incomplete. You may not be aware of what pilots are really saying about that whirlwind event in unsolicited blogs.

It looks like we have talked to different people. The pilots I corresponded with experienced the mayhem first hand. I received many testimonies where Flyties held strong without one failure.

The Claw clearly failed in many cases. There is an inherent weakness in the design and it will fail in actual conditions. The Claw representatives said theyll replace all of the Claw units that failed? Thats a noble gesture since any failure likely meant that the aircraft involved were damaged. Im not trying to persuade you one way or the other. I just want to bring to your attention another point of view.

While our canvass of the grounds wasnt exhaustive, we did talk to a couple of dozen people who experienced the blow. None had Flyties, so we couldnt judge their effectiveness.

We spent time in the Hunting Solutions booth and heard nothing but testimonials from customers. It actually got a bit tiresome, frankly. In this issue, we report on two products which outperform both Flyties and The Claw, in our view.

At the airline for which I flew, voice- activated commands were used for years. I never really appreciated that function until I became a Captain.

To operate the landing gear, all I had to do was say, “Landing gear up (down) please,” and it magically came up (down). Same with flaps up and down. It was great.

When I got ready to eat, all I had to do was speak into an intercom and say, “Would you bring me my meal, please?” and it would appear on a tray. Technology is wonderful.

Im sure you already know this, but on page 29 of your May 2011 issue, you are correct that the RAF called the A-20 the Boston.

But the illustration you used is of a French Arme de lair aircraft, as you can tell by the camouflage pattern, the reversed colors in the roundel and fin flash, plus the lettering on the rudder.

Youre correct and no, we didnt know. But we do now.

In the May 2011 article “Portable ADS-B WX: Free Data with Limits,” you write, “The slick part of this [Wi-Fi in the aircraft] is that SkyRadar also sends its GPS signal so the iPhone has a GPS even in airplane mode.” This statement is confusing at best.

GPS receivers are called “receivers” because thats what they are: They receive signals broadcast by GPS satellites, do some math, and spit out location data-no transmissions are required. “Airplane mode” only disables a phones transmitters; the receivers (and thus the GPS function) will continue to work. This is easy to test: Make sure youre someplace where your GPS-capable smartphone gets good GPS reception, put it in airplane mode, and launch a GPS location app. The app will work just fine.

The iPhones GPS receiver is disabled in airplane mode, although wireless can be configured to function. The phone can thus receive position data through the onboard Wi-Fi system. Other phones may be different.