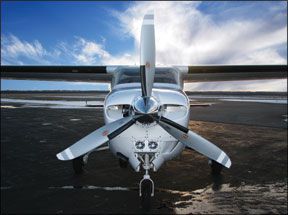 TN P210
Thank you for the article on the Turbonormalized P210 in the May issue. I had my P210 converted by Vitatoe Aviation in early 2012 and now have over 200 hours on the engine. I’m very pleased with the result—it performs as you described in the article: it’s much faster at all altitudes, including cruising at over 200 knots above FL180; climbs to the flight levels in about half the time as before; and most importantly, does all this without cooling problems.

Engine management is much simpler than before and fuel consumption has dropped by about 3 GPH because I can reliably run lean of peak.

I found Larry Vitatoe to be a first-class person to do business with. From my first conversations with him prior to placing my order, through the conversion, the one-year warranty period and after it has expired, he has been pleasant, informative, helpful, honest and prompt. My two minor warranty claims (work performed elsewhere) were promptly paid with no questions.

His team delivered the airplane on schedule and within the estimate. Mine was about the tenth one done, so they were still learning—they have voluntarily supported my installation with changes based on what they learned after my installation.

iPad Mounts
In your article on iPad mounts in the June issue, you suggested that mounting an iPad on the copilot’s yoke is OK so long as you don’t mind looking at it at an angle.

My experience has been that using a fully articulating mount like RAM’s allows me to mount it on the copilot yoke and turn the iPad so that it faces directly towards me. It works perfectly. I can see it clearly, it is easily within reach and it does not block my view of the panel.

Recurrent Training
It was good to see the article on recurrent training in the May 2013 Aviation Consumer, but I have to take exception with two items in the section on “Motion.”

You stated that a simulator should be at least a “Flight training device (FTD) that meets FAR Part 61.57(c)(2) . . . and use for an IPC.” This is misleading. On one end of the scale, both simpler aviation training devices (ATDs) and more regimented FTDs meet the requirements for logging approaches toward currency per 61.57(d), or table A1-2 in the back of the instrument PTS. To do an IPC, you’d need a Level-B, or higher, full flight simulator.

You also took a swipe at motion itself and cited an article as objective support. Your quote was out of context. The same study (really a metastudy looking at other studies on motion) points out that motion may have different values depending on the background and skills of the pilot. Motion as a distraction factor alone may have much more impact on the experience for a GA pilot compared to the professionals the source studies focused on.

Jeff Van West is a former editor of Aviation Consumer.

You left out FlightSafety International in your article on recurrent training. They are the most highly regarded and considered to be the most thorough of the simulator training companies. I attend the New York LaGuardia Learning Center twice a year for King Air training. They invariably cover all of the required items using scenarios that keep the training valuable, interesting and fun—plus they are extremely friendly. FSI costs more than other vendors, but as an owner-pilot, I consider it money well spent due to the quality of the training.

We did not include FlightSafety International in the article because it has dropped its simulator recurrent training for piston aircraft. A number of readers who were owners of piston-engine airplanes let us know that they were disappointed that they could no longer go to FSI for recurrent training.

A & P Recurrent
Training I disagree with your suggestion for recurrent training for A & Ps in the editorial in the June issue. Let’s be careful what we wish for.  Adding another burden and responsibility to our underpaid A & Ps will have to be passed on to customers.