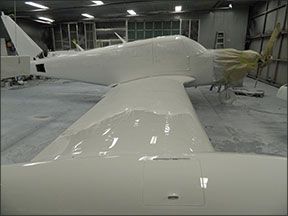 In 2010 we had our Cessna twin painted. I started with the Aviation Consumer paint shop survey from November 2006. Then I followed up with other magazine articles and looked at airplanes on airport ramps over several years. I thought that I did everything right.

In spring 2010 we decided to go to Oxford Aviation in Oxford, Maine, to get the airplane repainted. There were some early warning signs about confusion in interoffice communications, but hey, it was spring 2010 and everybody had some problems of some sorts.

The job was done on time, the charge was the amount agreed upon in writing before I left and the airplane looked really well done when we picked it up. The A&P was a bit odd, but everybody else was pleasant to work with. But after a few months paint started to fall off the airplane. We got the areas repaired after one year, no questions asked (and these spots are holding up exceptionally well ever since), however the paint keeps falling off in other areas.

Subsequent attempts to communicate with Oxford (even with return receipt requested) were ignored. In December 2013, Oxford Aviation went bankrupt and more paint is falling off the airplane.

Our experience and the paint shop surveys over the years clearly show that the survey is only a snapshot at the time. There are hardly any shops doing consistently good paint work for over a decade straight. Next time I would wait for the Aviation Consumer survey to come out, get the plane painted quickly after that—at a shop as conveniently located as possible. We will get the plane repainted this summer, at a shop minutes away from our maintenance shop. Hopefully I will have done better this time.
G. Pfeifle
via emai

Tejas AeroServices, located in San Marcos, Texas, has been performing aircraft refurbishment and restoration of personal and corporate aircraft since 2004, earning a national and international reputation for our quality work. Our customers have won multiple awards at AirVenture and Sun ’n Fun, we provided custom paint work for the Mooney Aircraft Company, and our work has been on many magazine covers and reported on in many articles. We are very proud of the reputation we have earned over the years (during which we have painted several hundred aircraft).

We were included in the list of top shops in your annual paint and interior shop surveys. We are puzzled by the statement in the latest paint shop survey (June 2014 issue of Aviation Consumer) sent to you by a self-described customer of ours. In it he complained that the paint was coming off of his aircraft.

Tejas offers a one-year warranty and we don’t want a single customer dissatisfied with the work that we perform and bend over backward to correct even the slightest squawk. However, I have had no customer reports of paint ‘‘flying off” any aircraft we painted. In the 10 years that we have been painting aircraft, this has never happened. That is not to say that it can’t happen. We simply can’t fathom why anyone who has had this type of experience would not report it to us or give us a chance to correct the problem.

This sounds like a serious breakdown of customer/shop communication. Overall, Tejas earned favorable scores in the recent paint shop survey, as it has in previous surveys.

Soundproofing
The article on soundproofing in your June 2014 issue gives an understated impression of how much an improvement a 10-decibel reduction in sound is and an overstated impression of the risks associated with exposure to unreduced sound. The article implicitly states that sound doubles every 10 decibels (“80 dBA is twice as loud as 70”), which significantly understates the relative change. Excessive sound is unquestionably damaging to hearing, but perhaps not as much as described in the article. The average of 92 decibels at the pilot’s ear which the article mentioned cannot accurately be stated to cause hearing loss, at least not realistically in the context of typical general aviation.

We concur that the decibel scale is logarithmic and a 10-decibel increase is a tenfold increase in sound power. That being the case, the positive effect of a 10-decibel decrease in cabin noise level was understated in the article. However, we stand by our claim for the risk of hearing loss in a 92-decibel cabin environment, based on the material reviewed in researching the article.
piper’s diesel archer

In your recent article on the Piper Archer DX (June 2014 Aviation Consumer), there is this statement, “Also, there’s a low fuel tank temp limit for starting (-32 degrees F for Jet A; at least 32 degrees F for diesel).” Does this imply that the engine is certified for operation on automotive diesel?
Mike White
Kennewick, Washington

The Centurion C2.0s engine in the Archer DX is certified to use both Jet-A and diesel fuel or with the two fuels in any mixture ratio.

tso’d altimeters
A question has puzzled our group of pilots for some time. Self-proclaimed experts say a replacement altimeter must be TSO’d, but we can’t find documentation to support this.

There’s no regulation we could find that directly says you need a TSO’d altimeter, but the type certificate of the aircraft could require one. The standards for passing 91.413, Appendix E certification for IFR flight, however, might only be fullfilled with a TSO’d altimeter.