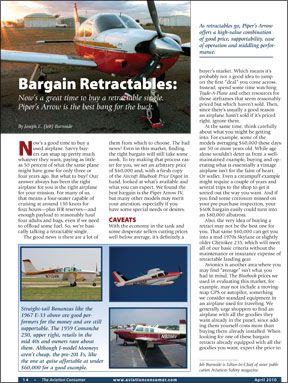 As always, I enjoyed reading Aviation Consumers airplane review of bargain retractables in your April 2010 issue. But having owned both an Arrow and Cardinal RG, you represent the especially efficient Cessna 177RG unfairly.

This places the 177RG just behind the Bonanza and Debonair in range capability. Your chart should have at least shown this model variation, if not the maximum, since it purported to include optional fuel.

In real life, my 60-gallon 1975RG cruises comfortably at 140 to 145 knots at 10 GPH depending on load, for 6 hours without reserve. My 1977 Arrow III (which back in the day sold for a premium over the T-tail IV, due to its more polite runway manners) cruised no better than 135 knots on 12GPH, also for 6 hours thanks to its larger 72-gallon tanks.

I just read your article on bargain retracts and have two nits to pick. There is no way that a Cardinal RG has less range than a more draggy Cutlass RG as indicated in your second bar graph. I suspect that the two were somehow switched.

The second slight error that I noticed has to do with the Cardinal RGs engine dash number in the chart on page 31. It should be -A1B6D not -A1B60. Other than that, keep up the good work. I look forward to the Aviation Consumer appearing in my mail box each month.

To the 363 Cardinal owners who wrote expressing some version of the sentiment, “no #@!$%&* way is my Cardinal that short on range,” we hereby post a groveling and mortifyingly sincere pledge to never again fail to more carefully examine all the fuel tank options. Here is a corrected range chart carefully distilled from actual reader reports.

We know articles are space limited, but we would like to stress two critical areas in your well-written article “Tablet-Based

EFBs: ChartCase Wins by a Nose.” (See the May 2010 issue.) Please consider the following response offered as a clarification.

Stenbock & Everson, Inc. is proud of earning the top pick award twice in a row. In our experience as a leading EFB provider, we rate a solid state disk (SSD) and the best possible display as make-or-break EFB features.

If you fly with a standard spinning drive, it isnt a matter of if youll have a failure, but when your failure will occur. To avoid the issues that plague standard drives, all ChartBook systems feature solid state (SSD) hard drives.

We believe that the cockpit is not the place to try and save a few bucks on a cheap drive so we only sell and recommend SSD.

The ability to clearly view the EFB screen is a key concern and primary decision factor when choosing an EFB for their aircraft, according to feedback from users and prospects alike.

We improved the standard EFB display and feel that it makes a difference every time the product is used. Our exclusive customized Flight Definition Display is composed of an optically bonded display that increases the contrast ratio by up to 200 percent.

While we offer a budget-saver standard display, we strongly recommend our Flight Definition display upgrade for the best available visibility. ChartBook with Flight Definition display is not offered by any other company. We want to be sure readers recognize that the similar 2Go PC platforms offered by two companies in the review are not identical in terms of components or options.

Please also note a pricing correction: ChartBook with Flight Definition Display is priced at $1995.99 (article states $1795). ChartBook comes equipped with SSD in 32GB (standard) or an optional $100 for a 64GB add on.

After reading Ken Suttons Autopilot Odyssey article and his rather blanket indictment of Century Flight Systems, I would like to offer another viewpoint concerning their equipment and service.

Century installed a 2000 in my G-33 Bonanza in 1995. It is a full three-axis and I also have their altitude pre-select. The autopilot is coupled to an Apollo GX60 GPS, an Apollo SL30 navcomm and an elderly KX170B.

The 2000 has been incredibly reliable over the entire 15 years it has been in my airplane and flies the airplane as close to perfect as one could expect. The computer has been out of the airplane two times. One time the airplane wasnt tracking correctly-in this case, the trouble turned out to be the Bendix/King HSI. The second time was just recently when the autopilot was flying in a 2- to 3-degree left bank-the computer was the problem and it was fixed the same day.

Century troubleshot and repaired the autopilot both times. The only time there was a delay was when the HSI had to be sent in for overhaul. In both cases, I called, made an appointment, flew the airplane to Mineral Wells and the repairs were accomplished the same day. Century technicians were courteous, responsive and knowledgeable.

Although I can certainly sympathize with Suttons experience with the Triden, my experience with Century equipment, service and support has been completely the opposite. The Triden may very well not be a good fit for a 310, or the installation may have uncovered something that caused the problem. However, I know personally that Century does manufacture some good equipment and I have seen how excellent their service can be.

Ken Sutton certainly picked a bad time to shop for a new autopilot, as reported in your April issue. I wasnt aware of the recent history of Chelton and S-TEC either. For readers who have an older autopilot, there is another option that I can recommend as a lower cost solution that has given us a good half a loaf in the autopilot department.

Like Ken had, we have a Century IIB (Piper Autocontrol III) autopilot whose wing leveler and heading bug circuitry still work up to spec. The rest of the functionality is marginal and rarely used. After upgrading our Garmin GNS430 to the 430W, we installed a DAC GDC-31 roll steering converter which interfaces the Garmin to the Centurys heading bug.

A new annunciator lets you choose either roll steering or heading bug modes. The GDC-31 takes full advantage of the 430W approach functionality and will steer the airplane around a procedure turn or RNAV approach with aplomb.

It will also fly a LOC or ILS approach to the FAF and then disconnect-push the annunciator to continue on the heading bug (or the Centurys ancient analog steering) or disconnect the autopilot and hand fly the rest of the way in.

Yes, its a single-axis solution, but for our needs, its plenty good enough. We even have a nearby shop that services the Century IIB. Gives us a little more assistance so we can wrestle with our Voyager EFB, too. Installed it only set us back about $2000.