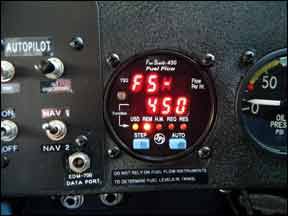 Fuel Totalizer Accuracy
In spring, I had a new Garmin GTN750 installed in my 1983 Mooney 201 and was amazed by the unit’s performance. The only thing missing was fuel management capability and as a result, I had the fuel flow option added to the existing EDM-700 and wired into the GTN.

Since this was my first exposure to fuel flow monitoring, I didn’t know what to expect in terms of reliability and accuracy. And what I experienced in the field blew me away. I was expecting a reporting accuracy rate of perhaps 96 percent, but was pleasantly surprised to find the accuracy greater than 99 percent. At each fill-up, I compare the fuel loaded onboard with what the unit stated as actually having been used and the numbers are always within a few ounces.

While I found the article very informative, I was surprised that Aviation Consumer didn’t test the units for accuracy and publish the results, as that’s what these units are all about.

You got lucky. Most fuel totalizers installations require trial-and-error adjustments in the so-called K-factor each instrument has. K-factor accounts to variations in how the fuel transducer measures flow and it can vary widely from installation to installation, thus it’s neither practical nor possible to compare accuracy.

Theoretically, if you’re obsessive about adjusting K-factor, you should get near perfect accuracy with any fuel totalizer.

I Like It
As a relatively new reader, I wanted to give you my thoughts on your publication. I have been a subscriber to KITPLANES for years and my primary interest is in single-engine, fixed-wing and homebuilt aviation.  I always re-up my subscription at Oshkosh, and was given some free back issues of Aviation Consumer.
I read through them while waiting for Theater in the Woods that night, and again the next day and was quite impressed­—so I subscribed for the year. Contrary to my fears that the magazine would be focused only on high-end (unaffordable to me) certified aviation, you have a very good mix of articles spanning the twin-engine Cessnas all the way down to $20 pilot gear like the recent windshield wash/coating article.

I also really appreciated the articles on Rotax overhauls and the new Garmin handheld.  I built and fly my own Avid Mk 4 with a Rotax 912 ULS and a Garmin 396 inset with an AirGizmos holder in my panel. So this type of article is right up my alley.

I also look forward to the classic aircraft reviews. If you haven’t covered them recently, you might also consider comparison of the Taylorcrafts with Luscombes against similar modern homebuilts.

After spending nine years off and on building, I’ve often wondered if I wouldn’t have been better off financially buying a classic plane instead of building my own for $35,000 to $40,000.  If it doesn’t already exist, a database of annual costs across certified and homebuilt airplane types would be very useful. Again, thanks for putting out a quality publication!

ADS-B Query
I just caught up with your November 2011 issue. I never see the Bendix King KT 73 mentioned in ADS coverage, although this transponder is advertised as being easily upgraded to ADS-B ops, like the Garmin.

It seems almost rebellious these days to be buying Bendix/King gear, but I have been very pleased with my KT 73, which I have owned since it became available. I assume there are more than a few of these out there, although I rarely see them mentioned. Price point is about the same as Garmin, I believe.

The KT73 dates back to around the year 2000 timeframe, before the ADS-B infrustructure was in place.  Still, operating software 1/02 or higher enables ADS-B output. But Bendix/King warns that this isn’t compatible with current ADS-B output specifications without further software updating. It will work in Australia, we’re told. We’ve put a bug in the ears of Bendix/King engineering on the status of this and will report back when we learn more.

Cirrus Safety
Reference the article on Cirrus safety in the January 2012 issue. Twenty-seven deaths in 13 fatal accidents involving Cirrus aircraft in six months since June 29, 2011, seems to support your point about CAPS training, but also brings into question the training of Cirrus pilots in general.

Is there a false sense of security associated with this aircraft that leads inexperienced and/or unqualified pilots to take greater flying risks?

This is, of course, the theory of risk homeostasis and is definitely qualifies as a chicken-egg consideration.