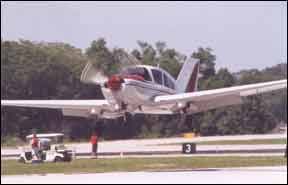 ADS-B
Nice article by Larry Anglisano on ADS-B in the January issue (Which Traffic Now?). I agree with Larry that the portable solution for ADS-B in should be given good marks over the installed solutions.

One point that I feel is important is that I don’t think the geographic limits of the weather information available is understood by users. A friend was returning from Florida to the D.C. area and when he could not get TAFs and METARs more than 250 NM from his position, he thought there was an equipment problem, not realizing that low-tier stations have a 250 NM look-ahead range.

I guess I am spoiled by XM Radio, but I like to look at the METARs and TAFs in my destination area when the weather may be marginal and I’m still well over 250 miles away so that if things start to go south, I can land early or take other appropriate action. As a general rule, 250 NM is not a satisfactory look ahead.

Folks at MITRE tell me that this is a bandwidth issue. I guess that must be true, but TAFs and METARs are text-only and are only updated every six hours (TAFs) and every hour (METARs), unless conditions are changing.

So, I am disappointed, but I don’t see that we are going to get much choice. Eventually sufficient folks are going to change to ADS-B that XM will stop providing services for aviation.

180 for 180
With regard to your article “Speed: Buying 180 Knots for $180,000” in the January 2013 issue, I have owned two Bellanca Vikings over a 15-year period. The only maintenance issues I have experienced are unrelated to the airframe per se. All the systems are parts-shelf items. The only constraints I mention to potential buyers are:

1. Buy a well-maintained plane that is inspected by a shop that knows wood aircraft and Bellancas in particular. It’s no different in this respect than a P210—buy a crummy one and get ready for misery and expense.

2. It’s not a good IFR plane for people who are not able to hand-fly an airplane IFR, which seems to include most people now. My Decathlon had more longitudinal and lateral axis stability. To most Viking pilots, this is a feature and not a bug. The wing is designed for performance, not stability, and pilots who need 7 degrees of dihedral need to find themselves an idiot-proof wing.

I fly my airplane back and forth between Iowa, D.C. and Morristown, New Jersey. In the past 15 years I’ve had only two AOG experiences, a cracked oil cooler and a failed vernier cable.

I’ve had more trip interruptions in my 1991 Decathlon.

Alternator Repairs
Pretty good article on alternator repairs in the February 2013 issue. I agree with almost all of the user comments, however, the article stated that alternators are run-to-failure items. A prudent operator follows, or at least takes note of the manufacturer’s recommendations.

One owner came to me expressing reliability concerns regarding his alternator—original on an engine approaching TBO. I told him not to worry, assuming his regular shop had inspected the brushes every 500 hours per TCM’s recommendations. He called his shop and they told him they never open alternators.
I examined an alternator that failed at 700 hours on a Cessna T206H. The alternator can only be purchased from Cessna, and it has no inspection protocol of any sort beyond seeing that it hasn’t fallen off the engine.

I think that’s ridiculous. In my opinion, there should be inspection procedures for an alternator, and it should be possible to inspect for brush wear without having to open it.

Seeing an alternator suddenly fall off line is a good indication that brush wear is a problem. In a quiet hangar, rotate the prop and listen to the alternator. If you hear a grinding, crunching noise, it’s not good.

Thank you for having the courage to mention the problems with Kelly alternators. I’ve never heard anyone say anything nice about their products.