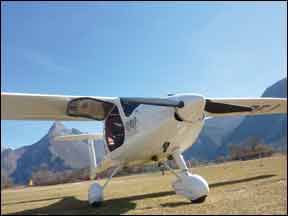 Pipistrel Problem
I really enjoy your publication and find it well worth the money. However, I must disagree with your Gear of the Year choice in the July issue.

Flying a Piper Archer II, I drooled over the gas mileage of your best LSA pick, the Pipistrel Virus. So I flew to the SLA showcase in early 2012 at Sebring, Florida airport to get a closer look at the Virus. Once I got into the pilot’s seat, I wondered who would buy this airplane?

To me, it is downright dangerous, as the main wing spar intrudes into the cockpit, crossing just a little bit in front of and above your head. (I am only 5 feet 9 inches.) In a not-too-perfect forced landing, your head could easily be crushed by the impact with the main spar.

I mentioned my concern to the salesman who responded that, “You lean forward in front of the spar just before impact”… then I surmised the back of my head could be crushed as the indeterminate G forces toss my body and head around in milliseconds, seatbelts notwithstanding.

I thought it a silly assumption that I could control where my head was in an uncontrolled crash with water or a fixed object like a tree. I surmise that not even a motorcycle helmet would save my life as my neck would be broken.

In my opinion, this airplane would never comply with the safety portion of FAR Part 23 certification and it certainly does not meet “common sense” certification. (I can just hear fellow pilots at my funeral,  “Too bad his head got crushed, but he sure did get great gas mileage while he flew.”)

We as consumers must consider all of the possibilities—airplanes do crash, both on land and in the water. And when they do, you may not be in control when you strike a stationary object as the G forces will be just too great. It is sort of like the fool who does not wear his seatbelt in a car because he thinks he can control how his body will react in accident. Anyone who has been in a bad accident knows the folly of that thinking.

New LSA airplanes are great and viva la innovation, but I have to thank Piper, the FAA and Part 23 certification for really considering—and testing­—the crashworthiness of my Archer II.

John A. Valldejul
via e-mail

Our view is that if you want a Part 23 airplane, buy a Part 23 airplane. One purpose of the light sport rule was to simplify certification requirements to reduce cost. Although the intent wasn’t to produce less safe airplanes, it’s not reasonable to believe an 800-pound airplane will have the same protective structure as one weighing 500 or 1000 pounds more.

Nonetheless, we think your point is a good one. The Pipistrel design is hardly ideal from a crashworthiness perspective, in our view. We should have pointed this out in our coverage.

We contacted Pipistrel for a reply and the company’s Tine Tomazic told us the Virus cockpit design is of Kevlar and reinforced composites and the seat belts are designed so that the head passes below the main spar in a crash. Further, Pipistrel argues that the spar’s location actually enhances safety because it will stop a tree branch from injuring the occupants. The aircraft’s A-pillars/spar cage and collapsable fuselage ribs provide more crash protection.

Stormscope Interface
In your July edition of Aviation Consumer, I think you have got one paragraph wrong in the Garmin Retrofit story. “For real-time lightning data, either system accepts input from the proven L-3 WX500 remote Stormscope without enablement.”

Maybe I have it wrong, but I have a G500 with most options, driven by two GNS430W GPSs. I also have an L-3 WX500 Stormscope. The Stormscope data will only show on the GPS screens.

I am led to believe that there is no enablement or option to have the Stormscope data shown on the G500 MFD. Would you please clarify this?

Larry Anglisano replies: We asked Garmin tech support and they confirmed the WX500 can play on either system without having to buy an enablement/unlock option. Ask your installer if they wired and configured this input.

One More Bike
I enjoyed your bike review in the July issue and for serious riding, I would probably get the Brompton.

But at Sun ‘n Fun earlier this year, I couldn’t resist ordering the cute little Carry-Me from the Aircraft Spruce booth, which arrived courtesy UPS a few weeks later.

It is the lightest bike I know of at 8 KG (18 pounds) and of mostly aluminum construction. Once you do it a few times, it folds and unfolds in a couple minutes. But if you haven’t done it recently, it takes longer to remember the steps.

It is a breeze to pick up or throw in the baggage compartment of my Beech F33A or the trunk of the car. Its biggest drawback is a top speed of about 10 MPH. That’s adequate for tooling around the airport.

Another is the tiny 8-inch wheels, which means pavement only and then not with very good stability. One reviewer had a bad back and didn’t like the forward riding posture.

I think I am going to order the dual-speed version, which goes about 14 mph, but brings the weight up to 9 KG. They are expensive. A single-speed (Model SD) is $650 while the dual-speed Model DS sells for $910.

Check them out at www.pacific-cycles.com.