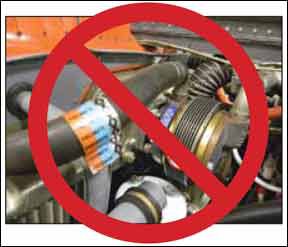 Re your article on going vacuumless in the June 2011 issue, when I bought my new Columbia 300 in 2002, it came from the factory as a traditional six-pack with a vacuum AI (KI-256). In November 2008, I embarked on an upgrade to the Aspen EFD1000 Pro using Lancaster Avionics in Lancaster, Pennsylvania. (They are awesome.) I chose to install the Mid-Continent Life Saver electric attitude gyro with battery backup as my backup AI. As part of the upgrade, I wanted to remove the

Our initial interaction with the Harrisburg FSDO led to a physical inspection of the airplane and our plans by the FSDO on October 23, 2008. He researched and let us know immediately that he could not approve the vacuum removal. He put us in touch with the New York ACO, which researched and decided Seattle ACO needed to approve. Seattle ACO then provided us with their requirements. We chose a DER with experience with the Seattle ACO to do the engineering packet.

The DER took a few weeks to complete the engineering packet. The cost was $3600. The DER took care of everything Seattle, New York and Harrisburg wanted for the vacuum removal. Our avionics shop managed the process as part of the install.

The engineer provided the details that proved our proposed upgrade was statistically safer than the vacuum system it replaced.

On the Columbia, there is an airframe standby battery which powers critical systems for at least 30 minutes. In addition, we have the Aspen backup battery and the Mid-Continent backup battery. So, we have backup power for at least an hour, probably more. It would be nice to have a second alternator, but I am convinced that my all-electric Columbia 300 is far safer now than it was using a vacuum system.

I am a little bemused by your editorial as well as the two letters you chose to publish regarding the GTN series. You posed the question early on: What else do you want these to do?

The GTNs do plenty. Theyre not autopilots, they dont control the airplane, but they give you a lot of capability. But its myopic to say the GTN is just another 480. For one thing, thats not true, but it also misses a larger issue. Its not just what the box does; its how it does it. The presentation, interface and user-friendly sophistication puts this product in a class by itself.

Im not sure what people were expecting. Its certainly not revolutionary, like, say, an Eclipse. Advances in processor speed and display are to be expected. But the integration of nav, terrain, traffic, obstacle, charts and weather is done in such a way that situational awareness is immediate.

Flight planning and loads of information are literally at your fingertips. This unit obviously had the benefit of people trained in consumer product design, unlike so many other radios, like the 480. And yes, the expensive Jepp charts are an option for a hefty price. The intuitive color design and vector-based graphics, unlike the FliteCharts, make them a useful addition. For someone who flies outside the Americas coverage, its nice to be able to add extras, like the Caribbean kits, without having all the paper.

Yes, the economy sucks, and it is hard to justify putting money into a depreciating asset. But I, for one, am glad that companies like Garmin and Aspen (and ForeFlight) are still working to develop products that make flying more enjoyable, safer, and yes, even easier.

Seems like Garmin deserves some credit for designing these and releasing them when they were announced, more or less working well. Thats more than you can say for many products in the aviation industry. The dilemma isnt Garmins-they have a very focused view of the GA market and a track record that says they know what theyre doing-the dilemma should be how to make room for one in your stack.

Just read your article in the July 2011 edition of Aviation Consumer about electronic Flight Guide. The company does not deserve your praises for a new product until they resolve their issues with long-time print subscribers, in my view.

I paid annual renewals in September 2009 (for 2010 editions) and November 2010 (for 2011 editions) and the last update I received was the spring edition of 2010. They keep promising the print editions (new format) are on the way. I trust youll follow up with the truth about this company.

We followed this up with Flight Guide and heres the latest. They should have contacted you by now. While their service to print customers may have been poor, we think they are making a good-faith effort to fix a problem.

That said, if this continues to be an issue, if they continue to fail to deliver on time, contact us again. We will follow up. For that matter, let us know if the service returns to normal and you are satisfied with the product again.