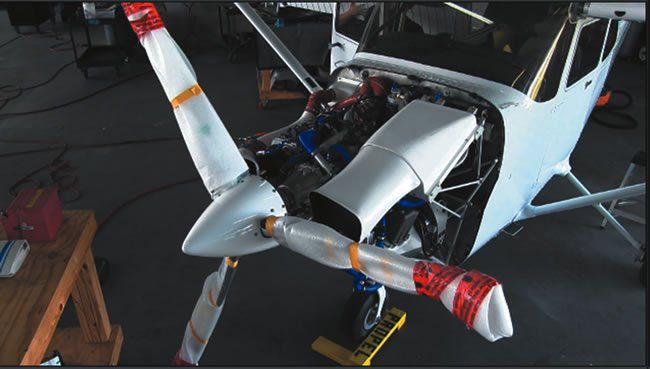 Last fall in a press release that few noticed, Continental Motors announced that a big flight school in Spain was converting 16 Skyhawks from Lycoming O-320s to Continentals CD-135 diesel engines. It escaped much notice because diesel conversions are thought to be a European thing unlikely to gain much traction in the U.S.

A Miami-based company called Africair wants to challenge that assumption by buying up recent-model Cessna 172s and transplanting them with Continental CD-135 or -155 diesel engines. With new Skyhawk prices escalating and the fleet aging, Africair now sees a potential market in North America, not just for training but for personal airplanes, too.

Although projects like Redbirds Redhawk and Premier Aircrafts Skyhawk diesel conversion have gotten most of the ink, Africairs conversions actually predate both of those by many years. When we visited Africairs Miami shops in October, the company was working on three conversions and at least a half dozen more were in the pipeline. So whats involved? Is it practical for an owner to do this or do the economics tilt just toward flight schools?

Africa might not come to mind as a hotbed of aviation, but theres more flight activity there than you might think. Africair, based at Kendall-Tamiami Airport near Miami, has been plying that trade for more that 40 years. It owns the distributorship for the entire Cessna line for Africa and also sells widely in the Caribbean. While the personal airplane isnt an unknown concept on the African continent-especially in South Africa-airlines rely heavily on Cessna singles for ab initio training. According to Africairs Travis Tinsey, who has extensive experience in Africa, the market has been lively and is getting livelier. While Diamond Aircraft gets the credit for being the modern champion of aerodiesels, Africair was close behind. As early as 2005, the company saw that avgas was becoming scarce and expensive in its principal market region, just as the then-Thielert Aircraft Engines was gearing up to produce engines for Diamonds DA42 and DA40 single. Even as Thielert was courting Diamond, the engine company was developing conversion STCs for the Cessna 172 and Piper Cherokee. Thielerts original Centurion 1.7 was STCd for installation in the Skyhawk K through S models in 2004 and the 2.0 version of the engine was available by 2007.

Africair began its first conversions in 2005 and has kept up a consistent, albeit small, volume conversion business since. As of late 2014 when we visited the companys Kendall-Tamiami shops, it was working on three more Skyhawks, all on spec and all likely to sell quickly, according to Africair. Virtually all of these airplanes have been shipped to Africa or the Caribbean, according to Africairs Jimmy Lockhart.

The Centurion 1.7 was phased out before Thielert declared bankruptcy in 2008 and following the companys purchase by Continental Motors in 2013, the engine line was re-designated the CD-135, for the 135-HP version and the CD-155 for the 155-HP variant. Both engines are still available for conversion and although Cessna is using the CD-155 in its Skyhawk JT-A, Africair is thus far the only U.S. shop offering that engine in the Skyhawk under an STC still owned by Continental. However, as of press time, its an EASA-only STC. U.S. approvals arent expected until next year, but Africair is counting on them to expand its efforts into the North American market.Just as we were recovering from price shock of Cessnas $430,000 new JT-A Skyhawk announced at AirVenture in July, we discovered that the half-million dollar 172 already exists and Africair sells it.

Even before Cessna certifies its JT-A Skyhawk, Africair has been delivering its version to African airline training institutions. Theyve been buying factory-new G1000 Lycoming Skyhawks and transplanting the engine with the CD-155 diesel. The $500,000-plus price includes container shipping to Africa and maintenance training.

Now, Africair wants to compete with two other companies-Redbird and Premier Aircraft-in offering diesel conversions for Skyhawks for flight training or personal use. Whats involved in such conversions? Are they practical and what will they cost?

Difficult Economics
Nearly everyone we talk to thinks diesel conversions would be an easy sell if the cost were the same as Lycomings or perhaps a bit more. But they arent. The CD-135 conversion costs about $90,000 complete, or more than three times the price of a premium overhaul on a Lycoming O-320 or IO-360. This high cost of entry continues to limit the market in North America. But in Europe, Africa, Asia and India, prospects are brighter.

It does really well in markets where the spread between Jet A and avgas is really big. In Ethiopia, you cant get avgas, so this airplane does very well, says Africairs Travis Tinsey. A spread of $2 or more between avgas and Jet A makes the diesel compelling, but the 60-cent spread common in the U.S. is far less so.

The appeal of the diesel, in addition to smoothness and ease of operation, is that it burns fully 35 percent less fuel than the Lycoming avgas engine it replaces. Unfortunately, it gives much of that back in a shorter time between replacement (TBR) than the Lycomings 2000-hour TBO and the replacement engine costs more than twice as much (about $51,840, depending on exchange rate) as a Lycoming overhaul.

Still, over the life of the engine, it burns so much less fuel that it ekes back some of those dollars. In the U.S., if capital costs arent included, the CD-135 operating costs is $4 higher than the Lycoming. In Europe, with a $4 spread, the diesels cost advantage is more than $20.

Converting One
Although its business practices might have been questionable, the original Thielert Aircraft Engines did two things well: It invested capital in high-quality factory equipment and it thought out how to build kits to make field conversions practical. Even as it was certifying its first engines, Thielert realized it would have to rely on both conversions of legacy airplanes and OEM sales to survive. It developed kits for the Skyhawk and Pipers PA-28.

What the customer gets-the shop, really-is a complete, palletized engine kit already on the mount. The kits include all the wiring harnesses, the engine ECUs, the cooling ducting and radiators, plus specialized engine instrumentation required as a condition of certification. (The engine can be interfaced to the G1000, but not in the aftermarket conversions.)

Africair has been specializing in converting restart post-1997 Cessnas because these include airframe improvements, relatively new avionics and are available at reasonable prices. For instance, a 2000 Skyhawk S of the sort we flew during our visit retails for about $100,000 on the used market and there are plenty to pick from.

Add the conversion cost and perhaps new paint and upholstery and the converted airplane sells for about $270,000. Africairs Tinsey said customers who want upgraded avionics or custom paint can spec that at additional cost. He said buyers have been willing to pay $300,000 for a 10-year-old Skyhawk because the airplanes are durable and easy to service.

The engine conversion takes about four to five weeks. The Lycoming is removed and the airplanes interior is stripped. Any components that need repair or replacement are tended to, including repainting, if necessary. The engine mounting is straightforward, but requires a weight-and-balance adjustment by moving the battery aft of the cabin.

Inside the aircraft, the push-pull mixture and throttle are replaced by a quadrant with a single lever and the panel gets a switch module for the engines ECU controls. Two 3-inch round instruments display engine condition, power output and fuel flow. Because the engine returns fuel to one tank, theres also a kit to replumb the fuel tank valve at the base of the cockpit pedestal. The two ECUs are mounted low on the firewall and the original cowling is retained, although its modified for induction and cooling air. Africairs conversion uses a constant-speed three-blade composite MT prop thats automatically controlled by the engine ECUs.

Performance
Payload wise, the diesel conversion definitely exacts a penalty. The Africair 172 we flew had a useful load of 775 pounds. With full fuel-its limited to 44.6 gallons due to wing structural considerations-payload is 298 pounds or two people. Down fueling can make the airplane a three-person ride, but four isnt practical.

Weve flown enough diesel-converted Skyhawks to know that their performance is predictable, albeit not consistent. Thats because at 135 HP, the conversion doesnt deliver surplus power and we think variations in airframes noticeably impacts cruise speed. So might the prop choice.

The same week we flew the Africair conversion, we also flew one of Redbirds latest Redhawk conversions equipped with a three-blade Hartzell prop, rather than the MT. While the MT version is an anemic climber, delivering about 500 FPM initially, but sagging to 350 to 400 at mid-altitudes, the Hartzell version does much better, delivering nearly 700 FPM initially and easily maintaining 500 FPM through higher altitudes. We found that the MT-equipped Skyhawk wouldnt reach a 1000-foot pattern altitude by mid-downwind, but the Hartzell makes this altitude at the crosswind-to-downwind turn point.

However, the MT prop seems to deliver better cruise speeds. In the Africair conversion, we recorded 118 knots true at 8000 feet, compared to about 109 knots in Redbirds Hartzell-equipped version, in similar conditions. In our initial flight in Redbirds MT-equipped Redhawk, we recorded cruise speeds above 120 knots.

The diesel conversions are consistent on one performance point: fuel burn. In full-power climb, they typically burn about 6.8 GPH and in cruise at 75 percent power, about 5.3 GPH. With two people aboard and full fuel, the converted Skyhawk has prodigious endurance (8 hours, plus) and range.

Is any of this practical for a private owner? It might be for a few who really love Skyhawks and resonate with the idea of fuel economy. And theyd better not be in a hurry. The converted Hawk steams along at 115 knots at almost 22 MPG, compared to 119 knots and 12.6 MPG for the Lycoming version. Thats a big economy Delta but one that takes a huge investment to realize.

We suspect owners wont bite in even moderate numbers until (and unless) avgas isnt available or costs a couple of bucks more than it does now. A one-dollar spread against Jet A isnt enough. The prospects might be better for flight schools, but only those flying enough hours to justify the investment in a conversion.