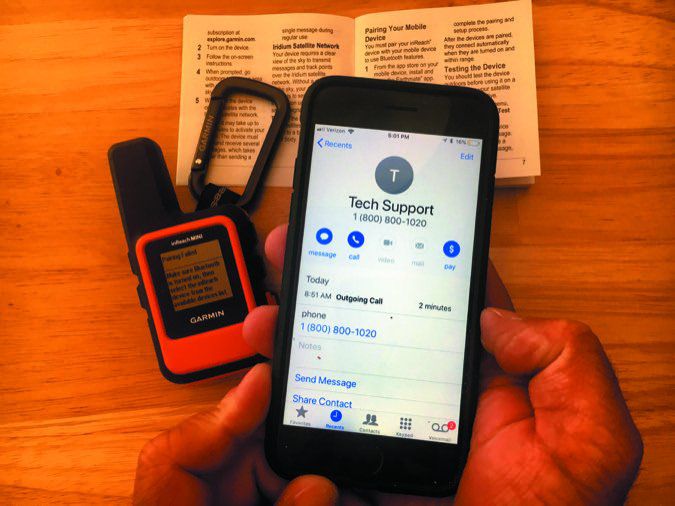 When evaluating products, we spend a lot of effort wringing out features and functions, but we don’t report enough about the manufacturer’s support quality that runs in the background. I’m vowing to change that because getting efficient help when something isn’t right can be the difference between loving the brand or telling your neighbors not to buy it. So when I had a Bluetooth connection problem with the Garmin inReach Mini portable satcomm communicator that we cover in this issue, I tried out Garmin’s telephone support. It’s especially relevant to our review because the inReachproducts are reasonably new to Garmin after acquiring the tech from DeLorme. Growing and supporting the adopted product line can be tricky because the in- Reach straddles multiple markets. Needing legit help, I put on my consumer hat and dialed up the 800-800-1020 support line.

In our work, we might not get a realistictaste for the product’s support because weoften coordinate with a company’s mar-com department, which might try hard tosupport our time with a product. In Garmin’s case, it sets a high standard for howpress relations should be handled. Frankly, we’re spoiled by its support effort, and Garmin is plenty smart to know that the success of a product relies partly on how well it works with the media. Avidyne and Aspen also get it right, and so do Seattle Avionics and Airtext. But that doesn’t exactly represent the service an end user might get when unboxing a problem.

When I selected the extension for inReach support, it took nearly an hour to talk with a pleasant Kansas-based service rep, but it was clear she had limited inReach Mini knowledge. I was one of the first users in the field, and support for the Mini is just ramping up, I’m told.

When I dropped a bomb and told her I was running the device with the Garmin Pilot aviation app and not the Earthmate app, she apologetically handed me off to Garmin’s aviation support group, since she knew little about the Pilot app. That was fine by me; I’ve respected the talent of this team, especially on the dealer support level where deep troubleshooting and engineering is required. But when I called later that afternoon, the system said the wait was over one hour to talk to them. The high-quality inReach products deserve better and customers expect it, which is what I told Garmin’s Kyle Grabill, the senior director of Garmin’s quality and consumer support, who implemented a new support strategy as a result of my experience with the inReach.

“Because the inReach Mini expands customer use in multiple markets, it increases the need for our team to understand the interfaces with aviation and marine products,” he said in part. It’s clear that the Mini platform will advance and interface more closely with Garmin’s panel avionics. This is logical given Garmin’s Connext Flight Stream cabin wireless technology, which also connects with Garmin’s D2-series pilot watch and VIRB action cams.But buyers using the Mini for time-critical flying missions won’t stand for hour-plus wait times for support and Grabill gets it. While training inReach support staff (based in Oregon, Kansas and Arizona) on the total Mini ecosystem, he’s changed the way inReach-specific calls are routed so you get an inReach specialist every time you request one. “Rather than being a call center, we’re going back to basics as a product support team,” he told me.