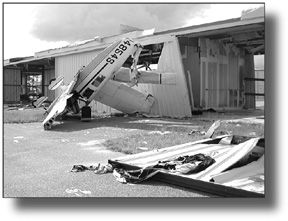 In times like these, I wish I hadnt snoozed through Mrs. Websters ninth-grade American lit class, at least the part where those more attentive than I-basically everybody-learned about the man-against-nature plot device. Given the events of the past six weeks-four major hurricanes pounding Florida and who knows what brewing-I could at least manufacture some entertaining fiction out of the entirely implausible tropical season unfolding.

Not that irony is in short supply. Theres something amusingly twisted about a knot of office workers clustered around a computer terminal browsing satellite images and arguing about outflow patterns and cloud top temps. Up north, you put a couple of bucks in a pool on the Patriots or the Packers, in Florida we bet the NOGAPS against the UKMET and no one thinks it odd.

A curious thing about Florida is that everyone is from somewhere else and because no major hurricanes have struck the state since Andrew in 1992, the sunny belief that hurricanes dont come here much persists. Theres an almost pathological resistance to meaningful preparation for a major storm. Then came August and September. The states rude wake-up got underway with a vengeance, first with Charley, then Frances, followed by Ivan and now Jeanne. As I write this, Ivan has retrograded back down the East coast, reformed in the Gulf and is now pummeling beaches in Texas. (If this were fiction, it would be bad fiction for simply not being believable.)

Aviation interests throughout the southeast have taken a beating this year and the insurance industry will feel it, which makes me wonder if anyone will do anything about it. As reported in this issue, at Punta Gorda, Florida alone, 150 airplanes were destroyed by Charley. Embry-Riddle lost a bunch of airplanes in Daytona Beach during the same storm.

Whats to be done about all this? The dawning realization for airports and owners in the hurricane belt is that just sitting by and hoping for the best wont cut it. In general, regional governments are learning that tough building codes stringently enforced do work to minimize damage and misery. In this issue, we detail how hangars built to post-Andrew building codes protected airplanes against so much as a stray bead of water.

Whats lacking is the will-by owners, by airport authorities, by insurers and by local governments-to confront the need to invest in more secure hangars or other means of protecting airplanes against hurricanes, short of flying them out. Im not enthusiastic about force-fed action by government or industry but clearly, the lot of us arent doing enough to reduce losses. If, as some climatologists believe, 2004 is the harbinger of a new epoch of busy hurricane seasons, we all may come to greet stringent building codes with open arms. If the airport would let me, Id tear down our corroded hangar and put up a new code hangar so I could stop worrying about the airplane. Im blindly hoping that the demolition of the old one wont be done by the next storm to roar out of the Gulf.