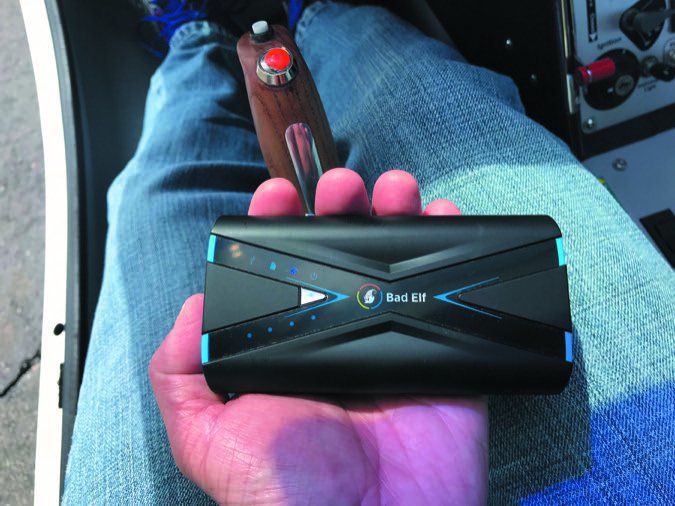 Wouldn’t it be so much easier to fetch Jeppesen databases on the fly with a tablet or smartphone? Instead, you log into your Jeppesen account on a desktop or laptop computer (what was the #%$! password?), transfer the data to the datacard and then bring the card back to the airplane. While this sounds like it should be easier than it is, some pilots dread the monthly data update chore like a trip to the dentist.

Bad Elf—the folks that developed a series of GPS receivers and data loggers to use with iPads—has a solution with the Wombat. We think it’s easy to use, it’s built well and it’s worth the $250. Here’s a look.

Native to Southeastern Australia, Wombats have back-facing pouches for carrying their young, so Bad Elf figured that Wombat would be a fitting name for its latest product since it has a pouch (well, a slot and a USB port) for carrying nav data storage cards and thumb drives.

Bad Elf teamed with Jeppesen, which has launched a mobile version of the Jeppesen Distribution Manager (known as the JDM database utility) that for years ran primarily on desktop and laptop computers. The idea behind the Wombat is to completely eliminate Jeppesen’s JDM on a desktop or laptop.

With so many pilots carrying smartphones and tablets to and from the cockpit, it only makes sense to be able to handle every stage of a navigation database update—wirelessly—from the cockpit. Until the Wombat, that was easier said than done.

That’s because the majority of tablets and smartphones don’t have USB ports and SD card slots, which is how navigation data is stored and loaded into panel avionics. That’s not changing.

But the Wombat accommodates all storage formats, including the SD cards used in Garmin’s G1000/3000/5000 flight decks and the GTN series retrofit navigators. Since the Wombat also has a standard USB port, Jeppesen’s Skybound Reader adapter (used with legacy Garmin navigators for Garmin Navdata updates) can be used. The Wombat is also compatible with Avidyne data updates, since these avionics access nav data from a USB thumb drive.

Given the bandwidth that’s required for large database files, building the Wombat device around a Wi-Fi platform was a no-brainer. It has no Bluetooth connectivity. Moreover, Bad Elf sees more growth potential with a Wi-Fi interface, since it’s built into Avidyne’s navigators and also in Garmin’s Flight Stream wireless data hub.

The Wombat has minimal user controls. There’s a power switch on the side of the case and its internal battery is charged via Micro-USB. Bad Elf says the battery life is plentiful—like months’ worth of power when only doing database updates—because it has a built-in 9000-mA battery. Tap the silver triangle on the front face and four LEDs show the battery status. The device can be charged from any USB source, preferably a high-current (2 amps or greater) source.

Speaking of power sources, the Wombat can be used as a USB battery bank. The device’s side USB port supplies a 2.4-amp output for charging an iPad or fast charging a smartphone. The other USB port on the front won’t charge an iPad, but does output 1.0 amps of current for charging other devices.

Since the device transfers data at typical Wi-Fi speeds, standard 28-day data updates can be sent from the tablet/smartphone into the Wombat in as little as 15 seconds. Chart updates will take longer, perhaps eight minutes, and large files like terrain databases can take as long as 25 minutes. Remember, you’re still writing data to flash memory, so data speed depends on the storage card you’re writing to.

Connecting the Wombat to your smartphone or tablet is the same as connecting to any Wi-Fi network. Look for and select the device, enter the Wi-Fi password and join.

As for loading the databases, if you have a JDM account through Jeppesen, simply use the free Jeppesen JDM app to download and install data updates similar to the way you did it on your desktop computer. JDM works with Avidyne IFD, FlightMax and Entegra systems, and with most all Garmin systems including legacy navigators like the GPS150/155. If you download your databases from OEM websites like Honeywell, for example, you use the free Wombat app to capture the data.

Bad Elf offers a $499 turbine version of the device for working with business aviation avionics from Honeywell (Primus Epic), Rockwell Collins Pro Line 21 and soon the Garmin G5000, which is found in a growing number of jet applications. Jeppesen still provides the data for these avionics. Worth mentioning is that the turbine version was developed for large jet fleet operators, who quickly embraced the device simply because of the effort that’s involved in updating avionics in the middle of a trip. The ability for crews to grab the nav data with their iPads while seated in the cockpit (instead of downloading to a laptop in a hotel room or inside the FBO, where Wi-Fi speeds may be slow) is an easy sell.

Since some avionics record flight logs and engine data, you can use the Wombat to harvest the data and share it with third-party apps, including Savvy Analysis (engine data), the CloudAhoy debriefing app and the web-based Cirrus Reports, for flight log and engine analyzer data.

It just makes sense to do data updates with a tablet or smartphone, which is possible with Garmin’s Flight Stream wireless hub and database concierge through the Garmin Pilot app. But that requires installing the Flight Stream 510 hardware, which doesn’t work for transferring nav data into legacy avionics like the GNS530/430. But the Wombat will, using the Skybound Reader.

We’re shocked it took so long for this practical solution for database updates. “Pilots told us they moved almost every aspect of their flying life to their iPad, but still have to deal with their desktop and laptop computers every 28 days for nav data updates,” said Bad Elf’s Bret Hackleman. If you currently pay a shop or FBO to do your updates, the Wombat could pay for itself in short order.