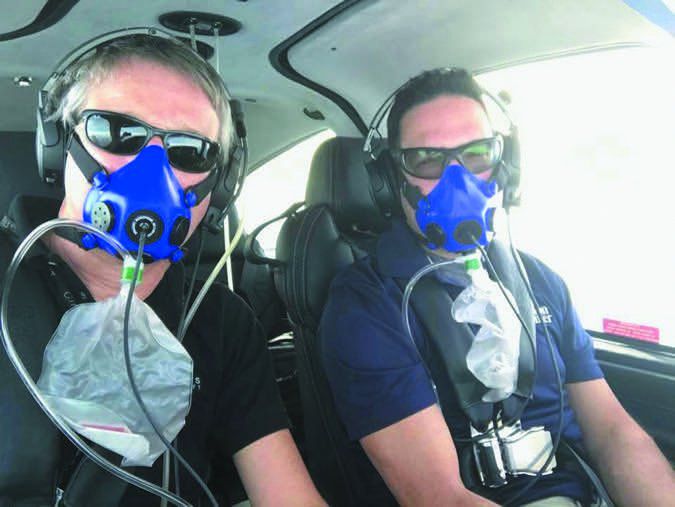 With nose bag in place and arms crossed at FL210 picking off the miles like nobody’s business on a Cirrus demo, I got to thinking about the FAA’s new BasicMed. Particularly, how pilots might be tempted to bend one of the rules to squeeze the most efficiency from a turbocharged airplane.

The FAA’s advisory circular AC 68-1, which describes how pilots can exercise their certificate privileges without holding at least a Third-Class medical certificate, limits flight above 18,000 feet MSL. Tempted to crack FL180 for another 6 knots in your turbocharged Mooney? According to the advisory circular, you’d be operating outside of BasicMed privileges. There’s even a bit on flight planning.

Got no choice but to climb into the flight levels to avoid a thunderstorm or icing? The rule makers expect BasicMed pilots to stay on the ground if there’s a possibility that weather will influence altitude-busting decision making. In parts of the country where ice and thunderstorms are a way of life, that could mean a lot of cancelled trips.

AC 68-1 specifically says, in part, that the aircraft must operate at or below 18,000 feet MSL during the entire flight. It goes on to say for BasicMed pilots operating aircraft capable of flight above 18,000 feet MSL, the pilot’s preflight planning must accommodate the altitude limitation. “For instance, if weather phenomena like icing or thunderstorms are forecast (or is within reasonable possibility) within the pilot’s route of flight that would necessitate climbing above 18,000 feet MSL, the FAA considers initiating such a flight to be contrary to BasicMed,” it says. In other words, keep the airplane in the hangar. A bit draconian, or should the FAA be worried that BasicMed pilots will fall out of the flight levels because they haven’t passed a Third-Class exam?

That’s what the exam is for, but more than one AME told me they wouldn’t examine a BasicMed patient any differently than they would for one applying for an airman medical certificate via the current FAA form 8500-8 application.Specifically when it comes to the high-altitude restriction, it would appear there is little clinical argument to keep properly examined BasicMed pilots from the flight levels. “I don’t know what’s different about having a heart attack at 17,999 feet than at 18,000 feet,” one said. When he questioned this part of the advisory circular, another AME was told the agency isn’t commenting on these specifics until BasicMed kicks off on May 1 of this year. Maybe it will be tweaked. Every AME I spoke with agreed that some of BasicMed’s restrictions seem arbitrary (another might be BasicMed’s 250-knot speed restriction), perhaps to differentiate it from Third-Class medical privileges.

I get that BasicMed (remember, AC 68-1, like any advisory circular, isn’t an FAR—it’s advisory) is a compromise and I’m grateful for another option for medical certification. It’s just that after dealing with the old system, I hoped for a more realistic clinical approach to certification. Years ago, I had surgery to cure a life-threatening disease. Responsibly, I grounded myself during my post-op recovery and reported the surgery during my next FAA medical exam. My local AME deferred my application to the regional flight surgeon, who after review of my stack of medical records quickly determined I was eligible for a Second-Class and issued me my certificate, with no other effort required, other than reporting any changes in my health. Case closed. Years later, I got a letter from the FAA’s certification branch saying that my disease (which the FAA once acknowledged was cured) meets CACI criteria, but I had to provide medical reports on its status. If someone in the office was familiar with the disease—and the well-documented, previously approved surgery that cured me—they would know there is no clinical basis to this request. Maybe if the FAA considers the number of small turbocharged pistons in the fleet, it will lift that silly altitude rule.