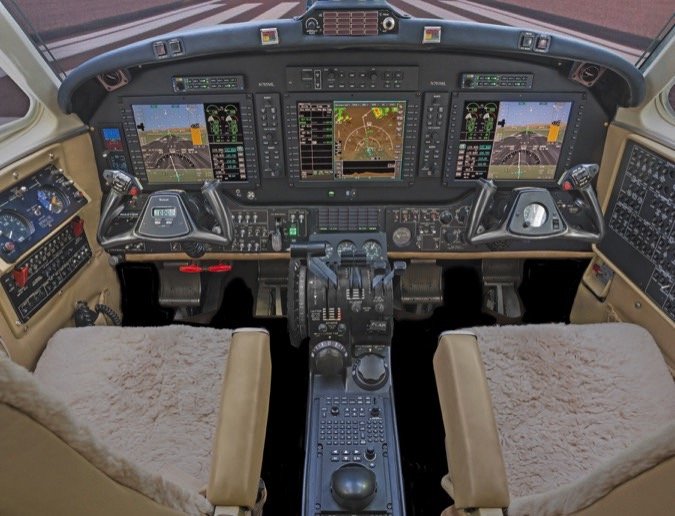 It took a few years for Bendix-King to earn an STC for its AeroVue retrofit glass cockpit for B200King Airs, but that’s no surprise. Without question, the STC work was a major effort. The AeroVue is a complex system with a three-axis autopilot/flight control system and automation that’s well-suited for business jets—which is where the system was born.

But the challenges aren’t over. The King Air avionics retrofit market is dominated by Garmin, which has been populating the G1000 system in the older King Air fleet, in impressive numbers, for a number of years.

For a taste of the AeroVue’s feature set and overall airframe interface, I flew with the system in Honeywell’s STC airplane, a mid-1980s vintage King Air B200. Here’s a flight report.

The AeroVue IFD (integrated flight deck) looks and functions a lot like the four-screen Honeywell Apex integrated avionics suite used on the Pilatus PC-12NG turboprop. Both systems have architecture that trickles down from Honeywell’s Primus Epic avionics.

The suite for the King Air has three high-resolution 12-inch color LCD screens. There’s pilot and copilot primary flight displays and a multifunction display. The displays are instant-on and the whole system comes up ready in roughly 20 seconds. The screens have multilayer anti-reflective coating that permits a pretty wide viewing angle—as much as 80 degrees. They simply have to be high performers for big cockpits and the are. There’s a dedicated autopilot controller directly above the MFD, plus two PFD controllers.

While the AeroVue has its own CAS (crew alerting system) for visual and aural notifications, the King Air’s various system warning annunciators are left alone (as is the environmental system) to minimize installation complexity. In the B200 I flew, the external annunciators were nicely located in an area of the panel that’s forward of the power levers, plus there’s an annunciator panel in the center of the glareshield. Engine and fuel system data is displayed on both PFDs.

Like the Apex in the Pilatus, the AeroVue isn’t touchscreen. Instead, it uses a combination of bezel keys, knobs and joystick commands for entering data and navigating the menus. But the best way to move around the system is with the trackball cursor control device (CCD). In the King Air it’s mounted in the center pedestal below the multifunction controller, which has an alphanumeric keypad and various buttons and knobs used for FMS data entry and for controlling the weather radar, terrain system and a variety of other systems.

BendixKing told me it avoided a touchscreen interface on the AeroVue because the trackball and CCD is proven on the Apex/Epic, resistant to the challenges of inputting data in turbulence. It works. But if you’re used to flying with touch avionics, you’ll initially reach up to finger the AeroVue screens. You’ll get nothing other than fingerprints on the glass. Garmin’s G1000 NXi for the King Air (or for anything) doesn’t have a touch interface, either.

The onscreen cursor is initially displayed with a circle around it when it’s moved among displays or when reactivated on the map after having timed out. The circle begins to fade away immediately and completely fades away after five seconds until only the cursor remains. The logic behind the circle is so the operator can quickly identify it on a screen. If you’ve worked with multiple computer screens, you understand. It vanishes from the screen after 60 seconds of inactivity and it’s displayed the same using the CCD or the system’s joystick.

The bezel of each identical display has four groups of six buttons (12 per side) and their functions change depending on what is being displayed. White lines are located adjacent to each softkey that match each bezel button with the corresponding softkey. I flew with the system on a bright summer day and found the LCD screens easy to read when sunsplashed.

Each PFD controller is split into two sections. The upper portion has a dual concentric knob for setting the baro, setting up bearing pointers and setting the nav/GPS course and map display range, to name a few, while the bottom part of the controller has a volume knob for the VHF radios. There’s also a transponder Ident button, a tuning knob and a nav source select key for cycling through the navigation sources displayed on each PFD.

In addition to dual WAAS GPS systems, a core component of the AeroVue is the KSG-7200 dual-channel ADAHRS. For old King Airs, this is a major step up from their ancient remote gyros and air data computers. The AeroVue saves a lot of weight—as much as 150 pounds—thanks to more solid-state magnetometers, MEMS-based (micro-electro-mechanical sensor) accelerometers and solid-state air data transducers.

In addition to supplying flight instrumentation to the PFDs, the ADAHRS is used by other subsystems in the AeroVue suite, including the ADS-B transponders (there’s no ADS-B In), the autopilot, the aircraft’s cabin pressurization system, plus the terrain and traffic systems. It’s really a deep interface with plenty of redundancy, as you’d expect for a King Air.

As for VHF radios, it’s out with the old two-piece (control head and remote transceiver) and in with the KTR-2280 multi-mode, software-driven radio system called the MMDR. It handles all non-GPS-based functions, including transponder, comm, nav radios and a DME. These are all operated using the PFD controller, the cursor control device and the Bluetooth audio panels made by PS Engineering.

BendixKing’s version of 3D synthetic vision is called SmartView and it has a deep feature set. It starts with a traditional blue over brown flight display and then builds upon it by overlaying the EGPWS (enhanced ground proximity warning system) database for a synthetic terrain and obstacle background on each PFD. The system also adds HUD-like symbology to the display, a feature used on the other Honeywell suites in jets. There’s a lot of data displayed on the PFD, and where other manufacturers’ syn vis displays can be cluttered, I think the Honeywell engineers did a good job with the AeroVue’s presentation. Make no mistake, there’s a lot of data thrown at you, but it’s configurable and some data is shared on the MFD.

For example, the field of view displayed on the PFD is also depicted on what is called the INAV (interactive navigation) display over on the MFD’s map page. On the PFD when syn vis is turned on (and in addition to familiar flight director command bars), there’s a flight path symbol, track and heading reference symbols and an acceleration chevron that aids in energy management. In addition to (and in unison with) the flight director command bars, there’s the option of displaying path-based and pitch-based symbology.

In the path-based mode, the primary reference for flying is the flight path symbol, or FPS. In this mode the flight director command bars are displayed with reference to the FPS—which is the primary guidance symbol on the PFD and is highlighted in green. It’s the opposite in the pitch-based mode, where either the flying wedge (a single-cue aircraft symbol) or gull wings (crosspointer symbol) are the primary and dominant reference cues and displayed in green. In the pitch-based mode, the FPS is still displayed, but it’s de-emphasized with a smaller size and gray color.

In a flying world where many have transitioned to synthetic vision cues, I think most will fly the AeroVue in the path-based mode using the flight path symbol as the primary guidance.

The FPS also includes an acceleration chevron, displayed as a green greater-than symbol to the left of the FPS. Its position with respect to the flight path symbol indicates the acceleration or deceleration of the aircraft, corresponding with the current indicated airspeed. In the real world, this is useful for setting the power for hand-flown climbs, descents and whenever you want to maintain a constant airspeed, in which case keep the chevron aligned with the FPS.

Descending out of 9000 feet for 5000 feet, the acceleration chevron positioned itself above the flight path marker, indicating an excess in energy and resulting speed increase. Pulling the power levers to idle put the chevron below the marker, offering at-a-glance cues of the aircraft’s decreasing energy state. Since the SmartView system is based on the aircraft track, the PFD displays an onscreen “V,” which depicts the current heading, and a “T” for the current track.

When the autopilot is flying (which in the King Air is probably the majority of the time when flying instrument approaches), the AeroVue’s automation is impressive and has some built-in failsafe functionality for avoiding altitude busts. Honeywell calls it VNAV technology. On my demo we flew the RNAV approach to Stevens Point Airport in Wisconsin, and with the decision altitude set in the autopilot preselector window and the approach loaded, the system automatically stepped the aircraft down to the published altitudes in the approach procedure. For example, input 1300 feet in the preselector and the autopilot will level the aircraft at 3000 feet until reaching the next point in the stepdown, where it descends.

King Airs are often flown single pilot and I think the AeroVue makes that chore easier, but like any integrated avionics suite, you absolutely must have a firm grasp on system architecture. No, Garmin logic won’t work—not close. BendixKing offers one-on-one, real-world AeroView transition training, plus use-case training videos.

BendixKing launches the AeroVue for the King Air B200 into a crowded market, and a space Garmin clearly owns with the G1000 NXi retrofit. To date, Garmin says there have been over 500 G1000 King Air systems installed. Rockwell Collins also developed the Pro Line Fusion, which has three 14.1-inch widescreen displays that have both touch and cursor-control functionality. The market still waits for Sandel Avionics to bring its modular-design Avilon flight deck for King Airs. While that project seems to have gone quiet, Sandel says it’s still working on it and maintains that the installation effort (and costs) will be sizably curtailed compared to anything the market has seen to date. While Sandel is hardly a stranger to the EFIS market, it will depend on shops to embrace it, and the same goes for the AeroVue.

BendixKing is currently building a dealer network that’s qualified to tackle the major installation required of the AeroVue. There are eight approved dealers in the U.S. as we go to press and BendixKing is targeting a four-week install time for a typical B200 retrofit.

It’s impossible to nail project pricing, since there are options for weather radar, TCAS, the AeroWave cabin Wi-Fi system and XM Weather, but typical fly-away prices might be in the $450,000 range.

BendixKing says it’s working on more STC approvals, but it is not saying for which aircraft. There are plenty of TBM, Pilatus and other first-gen turboprops equipped with BendixKing EFIS 40/50 systems and based on the system I flew in the King Air, I think the AeroVue could be a good fit.

Click here to see a video review of the AeroVue!

The Hangar’s Done. What Can I Put In It?