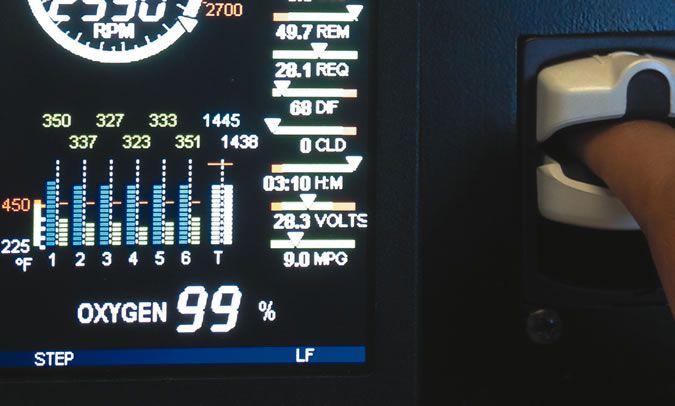 On the heels of the suspected decompression and hypoxia-related TBM900 crash that took the life of Larry Glazer, the president of the TBM Owners and Pilots Association, and his wife Jane Glazer, a non-pilot physician asked if there are onboard systems that monitor the health of a pilot’s body during flight. That got me thinking. With all of the available avionics integration, why not include body health monitoring in the interface? You know, important stuff like blood pressure, heart rate, pulse and of course oxygen saturation levels.

That’s partially what the Guardian Avionics Aero455 panel-mounted pulse oximeter system does. But the device isn’t a full-time, set-it-and-forget-it monitor. In other words, you have to voluntarily stick a finger in the thing to get a reading. That simple task could be too much for even a mildly hypoxic pilot to remember. A review of the Guardian integrated pulse oximeter/CO level system follows on page 20 of this issue.

Because I deal with the effects of hypoxia at low altitudes (I’m a non-smoking athlete), I curiously interviewed a handful of clinical professionals on the subject of full-time inflight hypoxia monitoring. While some are pilots and some are not, all agreed that it’s important to begin monitoring oxygen saturation levels early in flight, and at low altitudes­—lower than you might expect. I’ll skip the yawning lecture about the dangerous effects of hypoxia, but it’s worth mentioning a few tidbits that we tend to forget.

Dr. Bob Dodenhoff, our resident AME, reminded me that some people with COPD (chronic obstructive pulmonary disease) are hypoxic at sea level. Moreover, heavy smokers may not have hypoxic symptoms at the surface, but can develop symptoms at much lower altitudes than non-smokers. Dodenhoff stressed that there is no absolute level where hypoxia can not develop.

Another clinician pointed out that in a perfect world, the pilot would be connected to a pulse oxi from the start to the end of flight. The device would—without any pilot intervention—continuously monitor and alert the pilot to either descend to a lower altitude or begin using supplementary oxygen. Unfortunately, that device doesn’t exist because as far as I know, there is no other practical way to accurately measure arterial oxygen saturation than with fingertip oximetry, which uses a light emitter with red and infrared LEDs that shine through the fingertip—an area with generally good blood flow.

As you know, wearing an oximeter on your finger during the entire flight just isn’t practical, especially in the age of touchscreen. Even the Masimo iSp02 pulse oximeter iPad interface requires a wired connection between the finger sensor and tablet. Alternatively, the goal should be to recognize your own hypoxic symptoms while you’re alert enough to do something about it.

Personally, I know I’m becoming hypoxic (and I’m ready for it at around 10,500 feet) when my breathing initially increases, which also triggers a mild panic attack that escalates as I watch the altimeter climb. While I’m able to overcome the psychological effects of the symptoms as I adjust to the altitude, my performance continues to worsen. I have trouble reading back frequency changes, my attention span decreases and I’m as euphoric as I am after drinking numerous cocktails.

That’s why I hope for a more advanced biometric integration that would automatically alert me of a generalized hypoxic state before my performance does. This would require a tiny, untethered arterial sensor that won’t affect dexterity, comfort and can wirelessly transmit real-time data to a display, while also providing audible warnings. Until that device exists, the Guardian panel oximeter is as integrated as biometric avionics can be.