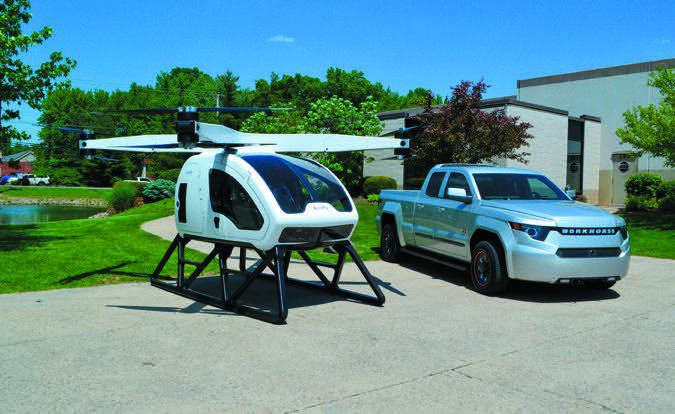 For the past few years, the Innovation Center at AirVenture is the place to visit if you’re even slightly interested in electric mobility, flying cars and UAVs. Sure, it’s a place for dreamers but dreams spark reality, I suppose. This year while doing a video shoot there on the Workhorse SureFly helicopter/VTOL (vertical takeoff and landing) personal aircraft, it was obvious that some of the dream machines are getting bigger—as in big enough that people would actually fly in some of them. The majority in the steady crowd of onlookers waiting in the long line to climb into the sleek SureFly seemed like they would and that’s a good sign for market acceptance. The publicly traded Ohio-based Workhorse Group, which builds electric trucks for customers including UPS, FedEx, Brinks and Ryder, to name a few, is going big and steering clear of a too-radical design with its octocopter because it thinks it is time to reinvent the helicopter.

The SureFly’s project manager, Patrick Connors, reminded me of the helicopter’s 78-year design run and matter-of-factly described what he thinks are the three main reasons there needs to be a replacement. “Helicopters as we’ve known them for 78 years are expensive to purchase, expensive to maintain and they make a lot of noise,” Connors told me standing in front of the SureFly, which to my eyes somewhat resembles a futuristic Schweizer 300-series piston helicopter, but with a much larger cabin. Connors wasn’t proclaiming anything we don’t already know. Plus, electric motors could be the answer to cutting cost, complexity and noise, which is partly what is giving the SureFly project some legs, or at least skids. The other key is simplicity. The SureFly has no wings, tail, tilt rotor or tilt wings, plus the props are fixed-pitch with no transitional parts.

The SureFly machine on display had a 2.0-liter four-cylinder Honda engine (likely not the final production powerplant) connected to two 100-kW redundant generators. The generators make electricity for the independent three-phase AC drive motors, of which there are eight, each connected to its own carbon fiber propeller. There are two propellers per arm, which are contra-rotating. The idea is to independently control each motor, which allows precise control of the pitch and yaw axes. If you’re thinking the machine sounds like a large-scale drone, that’s exactly how Connors labeled the overall design—except it’s on a much larger scale. The four arms, which sit atop of a spacious two-seat carbon fiber cabin, can be folded down so the machine can be stored in an average-sized garage. The SureFly is spec’d to have an 1100-pound curb weight and a 1500-pound takeoff weight. The current payload is around 400 pounds, but the goal is to bump that up to 500 pounds. With a ceiling of 4000 feet, Workhorse says this is a short-hop machine and is planning on a 70-mile range and one hour of endurance per each tank of fuel. The top speed should be around 75 MPH. The target price is $200,000 (the company is collecting $1000 position deposits) and the target market is diverse, including precision agriculture, emergency responding, city commuting and military applications, plus there’s package delivery and personal flying.

“The beauty of generating your own electricity is once you land, you don’t have to plug it in. Just refill the generator’s gas tank,” Connors said. There is no single point of failure. If the gasoline generator fails, the ship has dual lithium battery packs good for five minutes to make a powered emergency landing, plus it has a ballistic parachute. No stranger to drones, Workhorse invented the UPS delivery drone, a project that company CEO Stephen Burns said is progressing through the FAA approval stages.

But since the SureFly octocopter is manned (flown autonomously and manually), I think FAA certification will be a huge challenge, especially as it figures out what credentials you’ll need to fly it. The company plans to begin flight testing this year, with a lofty goal of FAA certification by 2019.