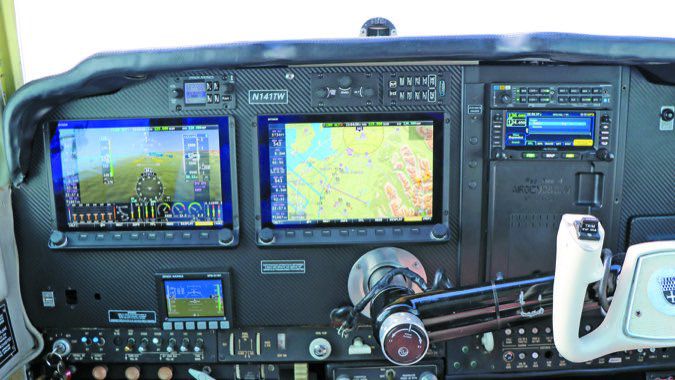 With its Certified SkyView HDX line, Dynon is seeking to effectively upend the established way of doing business in the world of avionics upgrades. Rather than only building dealer relationships with avionics shops that act as sales agents, Dynon will push the idea of any shop with a qualified A&P/IA installing this equipment. Some in the industry-including competing manufacturers and some avionics shops-have criticized this idea, perhaps for the wrong reasons.

The Dynon Certified retrofit glass system started life in the experimental market as the HDX, but now has an STC for installation in Cessna Skyhawks and soon, some models of the Beech Bonanza. The company has plenty of other airframes on its STC to-do list. But while the Skyhawk STC has been in place for a while, not many have been installed, likely because there are just two shops authorized by Dynon to do it: Thrust Flight in Texas and Merrill Field Instruments in Alaska.

The lack of an established dealer network for such a sizable product line is surprising, and Dynon’s Michael Schofield told me the company is sorting out which other shops it will select as authorized Dynon Certified installation centers. It will be a network that’s different than the one for Dynon’s experimental products. In the interim, it will be up to the aircraft owner to nominate an A&P with IA (inspection authorization) credentials to do the installation. The customer contracts directly with the installer for all aspects of the install, including instrument panel modification or fabrication. While some have suggested these major avionics retrofits-which include Dynon’s integrated autopilot-should be left to an avionics repair station, I think that’s a shortsighted, old-school way of thinking. I’ve seen plenty of horrific installs turned out by avionics shops and plenty of best-of-show projects done by IAs.

For talent that fits somewhere in the middle, Dynon insists that an A&P with a current IA certificate should be more than qualified to install the Certified HDX line and in many circumstances, I agree. An IA has much of the same inspection and signing authority as an FAA repair station, plus many avionics repair stations have IAs on staff. Suggesting that a competent and practicing IA (two imperative prerequisites) isn’t qualified to do the job might be insulting, especially considering the number of successful experimental avionics that have been installed by homebuilders who have little if any avionics experience at all-and not just Dynon equipment. Garmin’s G3X Touch suite (which includes an autopilot) is installed in a wide variety of IFR-flying experimental amateur built aircraft. You don’t have to hold any certificate to put one in.

Historically, Dynon has done a pretty good job of designing products that curtail and simplify the installation effort. It provides preassembled wiring harnesses and is simplifying and customizing the installation hardware for easier retrofit. Dynon’s field support and installation documentation is quite good, based on my own experience. But Dynon isn’t putting faith in every A&P/IA without doing some vetting first, although Schofield told me it’s the aircraft owner’s responsibility to ensure the work being done is airworthy. Still, Dynon won’t sell the STC authorization-which will specifically identify the name of the installing IA (or an FAA repair station)-or honor the warranty without verifying that the individual selected by the customer has the right credentials. After all, the IA or repair station will be accepting the liability by signing the FAA Form 337. The installation also requires a flight manual supplement, a revised weight-and-balance report, a logbook entry and instructions for continued airworthiness.

Dynon expects that many of these installers will have previous avionics installation experience, perhaps on their own aircraft or on other experimental aircraft. That’s an obvious question for you to ask when nominating an installer for your own Dynon project. If the A&P hasn’t installed anything more modern than a Narco Superhomer, you might want to find one who has because there will be a steep learning curve, in my estimation.

Moreover, an IA who keeps the certificate current, but isn’t actively doing airframe work or doesn’t understand EFIS technology, might not be the best candidate. There will be wiring that’s interfaced with third-party equipment, including IFR navigators, audio systems and antennas. There’s also software configuration, including setting the autopilot gains and other post-install tweaks. Plus, the interface includes mandate-compliant ADS-B Out.

Dynon is launching its Certified HDX system into a competitive EFIS retrofit display market-which will become even more competitive overnight if Garmin certifies its G3X Touch. It’s no secret that Garmin is dominant on the shop level, but a good shop is one that presents a buyer with options, including other brands with comparable capabilities. If your shop doesn’t, I would consider going elsewhere. Still, I suspect Dynon is at least somewhat concerned that some shops will push Garmin retrofits over the Certified HDX. While Dynon made it clear that it eventually plans to build Certified HDX dealerships at larger avionics shops (in addition to supporting A&P/IAs to do the work), I predict we’ll see more Dynon dealerships at smaller shops than at larger ones, especially those that don’t sell Garmin or may not even hold a repair station certificate. There are plenty of them.

“From our perspective, we’ll be looking for capability and quality more than the very particular FAA credential,” Schofield said. Until Dynon builds its network of installers that fit that criteria, it’s up to the aircraft owner to find one they trust. Like it or not, it’s a departure from the old-school regulatory mentality the industry has been determined to fix. And it uniquely gives customers more choice and influence in the way avionics are installed. That’s a big step forward.