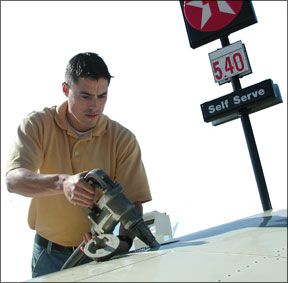 GREEN AIRPLANES: ITS A MINDSET THING

My wife informs me that, right on schedule, I have become my father, having entered the rail-at-the-idiots-on-television phase of middle age. And there is

so much to rail at. Specifically, two reports that ran nearly back to back last month. One quoted a middle-aged woman angry that she had to pay $100 to fill up her Lincoln Navigator. (My rail: “And you bought that car why?) The second report was

a roundtable of talking heads bemoaning the fact that George Bush couldnt convince the Saudis to increase oil production to stave off $4 gas. (My rail: “Did it ever occur to you morons to drive something that would allow you to barely notice $4 gas?”)

The airplane parallel isnt just $6 avgas. You can find that without looking hard; the worlds leading airport for ridiculous fuel prices, Teterboro, New Jersey, now has avgas at $7.81. (Check it out in the fuel finder section of our sister publication, www.avweb.com.) The elephant in the hangar is carbon emissions by light aircraft. I know owners are thinking about this because Im hearing from a few gently probing at some means of rationalizing 12 GPH. Well, thats easy. There isnt any. Little airplanes just arent green.

Its not a question of real impact on the environment-there are too few little airplanes for that-but of a sense of individual responsibility. For now, the best you can do is use the airplane wisely, pick your trips with care, run the engine as lean as possible and otherwise live green by reducing autogas and electricity usage. Plan B, which some owners subscribe to, is to merely dismiss the man-made CO2 issue as a complete hoax. You might not get much traction with this, but theres always room for different points of view.

More to the point, however, is looming opportunities. Aircraft owners-at least the ones who read this magazine-are thinking people and their urge to fly is so strong that the lack of cheap fuel and worries about carbon emissions will be a deterrent for only so long. For now, owners havent cared enough about fuel prices or emissions to have made noise that the manufacturers can hear. Were all flying less due to fuel prices, but, as noted on page 22 of this issue, the airplane manufacturers are just beginning to respond, if only tentatively. That will change.

The upside of rising fuel prices is that we are being pushed inexorably toward that inevitable sea change when fuel efficiency isnt something we ignore, but something we embrace-cars and airplanes included. Just as the woman squealing about tanking up her Navigator will figure out that a Jetta diesel or a Smart Car will quadruple her mileage, so will some savvy airplane company spot the tipping point and actually propose the green airplane.

The reason we dont have it already is that fuel prices havent reached a sufficient threshold of pain and although emissions are a concern to pilots, we havent accepted the idea that we can and should do something about it. The current gold standard for speed and efficiency, for instance, is the Cirrus SR22, which requires 550 cubic inches and six cylinders to drag a moderately heavy airframe along at 210 knots and 13.8 MPG. It carries four seats whether theyre filled or not.

In my view of the future, owners will be willing to give up what many dont need-the two extra seats-and settle for a much smaller and feather-light airframe powered by a small-displacement four-cylinder engine-maybe a third-generation turbodiesel or a tweaked-up IO-240 running UL96. Put these numbers on it: 165 knots at 4 GPH. Thats nearly 50 MPG and greener than practically every car on the road today. Theres a give up. Just as with the SUV, the two-seater carries less and it wont have a bench seat the size of living room sofa. But it will get you where youre going economically and-better yet-it will be both affordable and eco-friendly. The more efficient-lighter, less draggy-four seater will follow. Were not there yet, but its coming.