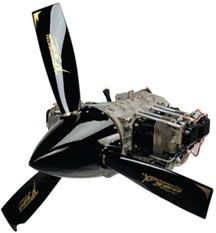 THIELERT AND SUPERIOR
Twice this month, I have heard disgruntled aircraft owners-one of them a service guy for a major OEM-ask when Toyota or Honda is going to get into the aircraft piston engine business. I keep wanting to say, well, how about never? But then I realized most of us have been looking across the wrong ocean for leading-edge engine developments. How about Germany rather than Japan?

And thats exactly the significance of the announcement in March that the Thielert Group bought Superior Air Parts, lock, stock and cylinder barrel. I spoke to Frank Thielert the day after the sale was announced and he said the companys business plan is to leave Superiors sales and distribution network in place while the German side of the house concentrates on manufacturing and quality control, something it has proven adept at doing. How about new, clean-sheet engine initiatives for gasoline piston engines? Not on the agenda, at least initially, Thielert said.

Its not that I dont believe Frank Thielert but I predict this will change and sooner rather than later. With its Vantage engine program and its well-regarded XP-360 Experimental powerplant, Superior has planted the seeds of head-to-head competition with Lycoming in the new certified engine business. But Superior is a small company with limited capital and developmental resources. Thielert, on the other hand, went public last fall and has the kind of capital necessary to fund engine development.

When I visited the plant last summer, I was impressed with the companys obvious ability to do cutting-edge engine research on a modest budget. With its 1.7 Centurion diesel, Thielert has shown itself to be both bold and market savvy. The little diesel that could drew scoffs when it first appeared but Thielert has nearly 1000 engines flying, a remarkable achievement when viewed against the lackluster performance of other engine initiatives weve seen recently. In short, Thielert gets it.

For the short term, Superior will steadily expand its volume and variety of PMA parts for the aftermarket engine business, which I also see as a good thing. That will force Lycoming and Continental to stay on their toes with regard to both quality and price and both of those companies are already improving in that arena. Customers can only benefit from this development. I expect some good (and surprising) things from Theilert and Superior during the next five years. You should, too.

WHY AVGAS IS FOREVER
Journalists in general and aviation journalists in particular sometimes give herd mentality a bad name. Sadly, we often write each others stories using different words. Such has been the case with doom-and-gloom reports about the imminent demise of 100LL. We published one such piece in 1986-20 years ago-and maybe youve noticed, 100LL still hasnt disappeared. Exploring the subject anew this month, we were somewhat mystified that we couldnt find many people who believe it ever will, which is something the oil companies have been saying for years. (Dont you hate it when theyre right?)

Thats not to say the fuels outlook is a bed of roses. The cataclysmic change in aviation fuel will almost certainly come as a result of escalating prices, not whether lead is available as an octane booster. Following last summers hurricane-induced price spikes, however brief, there was real worry in the industry about whats coming. Those who believe that the world still has plenty of oil and that the oil companies are manipulating supply to drive prices may have a point.

Unfortunately, inside the oil industry, everyone is nervously waiting for that point which signifies that oil production has peaked while demand continues to rise. Although we got the 100LL story wrong for 20 years, it wont be nearly that long before we see the long-term price rise that signifies the end of cheap oil. When that happens, the aerodiesels and FADECs that are but curiosities in the U.S. now will be must-haves. Question is, will the industry be ready?