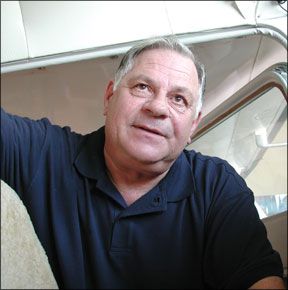 MESSING WITH THE WRONG MARINE

I ran into Nick Carlucci the other day at Home Depot, a guy whose name you probably dont know. I didnt know him either, until he flagged me down in the plumbing aisle. Running into Carlucci reminded me of something Ive noticed about small airports. They seem to attract three kinds of people: utility users, gadabouts and connected airport guys, of which Carlucci is definitely one.

Im a utility user. To me, the airport is like a road I use to get somewhere and Im usually in a hurry, likely to arrive at all hours of the day or night and I dont stay long. I drive in, fly off, run product tests or some such and then spin off to the next task. That probably explains why there arent any chairs in our hangar or a refrigerator filled with chilled drinks.

Every airport has its share of gadabouts, too. These are the guys who do have chairs in the hangars, but theyre more likely to be found in the FBO, chewing the fat, telling lies and generally keeping the airport furniture warm. Sometimes they even fly. They might complain a lot about how the FBO or the airport runs, but they seldom do anything about it. And thats where the third sort comes into play, the well-connected airport guy. Without these people, many of us wouldnt have even a narrow paved strip to call home, never mind a lighted 5000-foot runway with a GPS approach. Owners like me could easily drive up to the airport one day and find it being plowed under to build condos and we would never have seen it coming. The Nick Carluccis of the world work tirelessly in the background to not only keep airports alive, but thriving.

Carlucci, a retired U.S. Marine colonel and a Cessna 182 owner, works on the local airport board, smoothes over the inevitable political rough spots between airport users and administrators and does a hundred other things most of us never even see. Got a noise Nazi around your airport? Most airports have at least one. Someone like Nick is probably working the problem and you dont even know his name. I sure didnt. But Carlucci made it a point to know mine, simply because I happened to be wearing an aviation-related t-shirt and he figured that was reason enough to introduce himself.

Carlucci was in full flight recently at a town meeting well populated by the anti-airport crowd, a scourge every community seems to suffer. Like so many Florida airports, Venice Airport grew out of a World War II training base with a large real estate footprint. At Venice, that footprint includes a trailer park, for which the city earns revenue through lease fees. To meet the terms of an FAA grant, these fees were recently raised, which led one anti-airport complainer to tell the city council the senior citizens in the park were having to subsist on cat food. Oh, really?

Within days, Carlucci stitched together a $500 food drive by our local pilot group. When he asked the cat food claimant where the food should be sent, his call was never returned. What a surprise. Sadly, this is the kind of effort it takes to protect airports against the forces arrayed against them. And it takes people like Nick Carlucci to make it happen. We owe Nick and others like him a heartfelt tip of the editorial hat.

“You son of a gun,” writes reader Frank Singer. “I spent much more time on the March issue than I should have. After a few days and a bit of a headache, I positively identified two of the creatures… the other two take a bit of imagination. The fourth clue is a formula for a type of solder, but I could not find anything remotely associated with solder.”

Frank was referring to the Maposaurus contest in our March issue. We concealed four of Garmins clever Godzilla-like monsters in various parts of the magazine. We offered clues on how to find them only in our monthly e-letter bulletin. The reader who spotted all four first won a free Garmin GPS. The clue Frank is referring to is this: “Pb+Cu+Sn+Sb = ?” Those abbreviations are from the periodic table and refer to lead, copper, tin and antimony. These metals do make up forms of solder, but theyre also used to make babbitt, a soft metal used for bearing inserts. And on page 20 of the March issue, youll find a Maposaurus peering from inside the bearing shell in the engine half case. About a dozen readers spotted it. Did you?