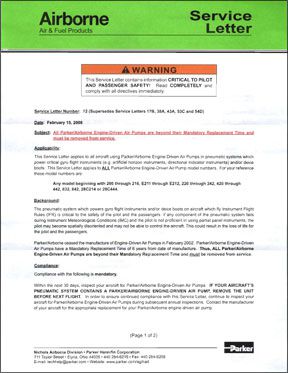 Parker Hannifin: Give it a Rest

As the late Ronald Reagan once famously said, there you go again. This time its Parker Hannifins Airborne division shotgunning yet another a service letter to thousands of owners “requiring” them to remove Airborne dry vacuum pumps. My use of quotes around the word require is purposeful. Although Parker Hannifin has zero legal authority to require owners to do anything, the tone of the letter is clearly meant to frighten owners into complying with the companys demand. Ive received a couple of calls querying about this from owners obviously alarmed-or

annoyed-by it. Several years ago, Parker tried a similar tactic by sending a letter explaining that aircraft equipped with dry vacuum pumps were “required” to have a backup vacuum source before flying in IMC when, of course, no such requirement exists.

Whats going on here is simple legal maneuvering. In 2002, Parker Hannifin, fed up with being sued over failures of dry vacuum pumps made by its Airborne division, simply abandoned the business. It stopped making and selling the pumps. To that, I say fair enough. Businesses make these kinds of decisions every day and, frankly, there were and there are plenty of competitors in the market making pumps superior to the Airborne product, in my estimation.

To reduce its liability exposure, the company is understandably trying to reduce the population of Airborne pumps in the field. If they get sued again, they can produce the letter and the list of aircraft owners it was sent to as ammunition to buttress the defense.

While I can understand Parker Hannifins ire at being the subject of some lawsuits that, I think its safe to say, lacked merit, I view this sort of fear mongering approach as reprehensible. It stirs up owners and plays on their fears and doubts merely to reduce the liability tail by some tiny incremental amount. I cant imagine that this juice is worth the squeezing.

Parker Hannifin made a bunch of vacuum pumps and Im quite certain it was a profitable line. At some point, it decided the risk wasnt worth the reward and it dropped the business. As a corporation, its free to do that. What its not free to do, in my opinion, is to browbeat owners into removing perfectly serviceable products at their own expense merely to reduce its legal expenses. If Parker wants the pumps out of the field, let them buy them back and make owners whole on the replacements. Otherwise, they ought to suck it up and just defend themselves in

court rather than trying to cost owners a lot of useless grief and money.

A couple of months ago, we established a new feature on our sister publication, www.avweb.com. Its a blog section where we can report and comment on news and developments that might not otherwise find a place in our magazines or news columns.

We will occasionally host blogs from non-staffers who have something compelling to say but, more to the point, you can comment on any of the blogs in real time. So if you think Ive gone over the top-again-you can write an instant reply drawing attention to my fractured logic. Or perhaps youd like to insert a comment of your own. Thats fair game, too.

Just log onto AVweb (www.avweb.com) and scroll down the home page to the blogs section. Well be there.