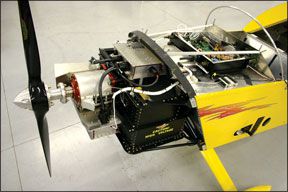 People who fly tend to be a bit cultish. We can remain devoted to products we love for the one redeeming value while tolerating the abuse of 100 failings. Were fans. Thats a plus if youre talking new technology. When the real-world operating experience of the Thielert-powered DA42 turned nightmarish, there was outcry and backlash-but there were still devotees. Granted, outside avgas enclaves like the U.S., customers will put up with quite a bit to burn diesel. For some its go diesel or go bankrupt, sooner or later.

Diamond Aircraft is now staking a hefty piece of the bank that they can win back and gain fans by reinventing the aerodiesel on their own as the Austro. The Austro is not a shined-up Thielert (now Centurion) engine. Its built on the same bones, but its construction is beefier. Aviaton Consumers editor, Paul Bertorelli spent

some time poking around that engine at the Diamond factory in London, Ontario. His impression is that that Austro believes that Thielert modified the original Mercedes block, head and injection system in ways that reduced durability. Modern, over-the-road diesel engines have head bolts as big as your fist a for a reason. Diesels pound the hell out of themselves and everything theyre attached to. Heavy structure isnt an option you can skimp on.

But if Thielert pushed the envelope too far, it was from their attempt to deliver performance per weight that was too good to refuse. They swung. They struck out, although as Centurion, theyre at bat again. Now Diamond is at the plate betting they can crack the fastball Thielert missed. The game for another captive market thirsting for a technological fix to flying expense is just warming up. Its name is electric aircraft. Do we see a parallel here? The allure of acceptable performance but at a much lower cost? A gamble on how long unproven equipment will hold up before needing replacement? How about a promise that trickle-down technology from parallel industries will solve the limitations of whats currently offered for sale?

The likely spots for disappointment are ever a close match: performance and maintenance costs. In the case of the electric airplane, the risk will be in not delivering the endurance and battery life promised when average pilots (rather than energy-savvy glider pilots) take the controls. The lions share of the utility and operating costs of electric flight hinge on those two things.

The need for (and gain from) outside-the-box thinking has even more potential with electric aircraft than with aerodiesels. Designers like to put the fuel on the CG so that the CG doesnt move much in flight. But the weight of the fuel (the batteries) doesnt change in an electric airplane. Takeoff and landing weight is the same. So now, payload should go on the CG as much as possible. Were taking bets on how long before we see electric aircraft with wing lockers. What about solar cells to supplement power in flight? Maybe yes, maybe no. Depending on who you ask, you could get between five and 20 percent of the power you needed for level flight from 100 square feet of solar. At 20 percent, it would be worth the weight and wing-efficiency hit. At five percent, were not so sure. This is all uncharted territory.

Theres also the possibility that the whole electric airplane market could go up in smoke-literally. A couple of good battery fires, or a design that was built just too light in a misguided effort to maximize its performance could end the game before it begins. This one is almost entirely in the hands of the manufacturers. Jeremy Monnett of Sonex put well when he told us, “If this party ends early, it will be because of someone being irresponsible.”

History has shown thaat it usually takes more than one disaster to kill a promising aviation idea. More washouts come from a repeated overpromise that continually underdelivers. Fans dont drift away easily; the chance that next time your team will win is too great. But even true believers can only take so much disappointment. Lets hope Austro and the electrics make at least a couple of base hits.