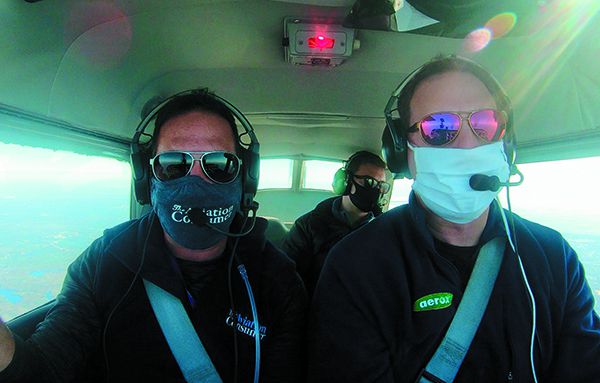 And headsets, eyeglasses and ear-based pulse oximeters. In the photo below, Scott Ashton from Aerox and I are wearing all six. We forgot our hats, otherwise they would be in the mess. And wearing that mess is not easy to pull off with precision. I’ve done a handful of flight demos and product evaluations while attempting to mask up properly with mediocre results. In the YouTube comments for our recent video productions, some viewers have ridiculed me for even wearing a mask in the first place. “Forced authority,” one said. “Wearing a mask in a small airplane cabin is about as ridiculous as the people I see masked up in convertibles,” said another.

In our work, masking up in the cockpit is the expected thing to do. Call it the new corporate etiquette that replaces the firm handshake with face coverings and elbow bumps. That’s fine. I have a germ OCD, anyway—not quite as bad as my paranoid obsession with midairs while fiddling with all the gadgets—but a close second. I’m just glad I finally figured out a way to make it all work, even with my big Italian honker in the mix. Some pilots have told me they struggle with radio communications while masked up, so by request I’ll share my success, which starts with plugging into an exceptionally good audio panel. Late-model PS Engineering and Garmin units are both proven winners, but only in the hands of good installers.

When we shoot our video reports, we generally capture the ICS audio from the earcup of a Bose A20 using a lav mic with modded gain. It’s crude, and there are more sophisticated interfaces, but we jump from airplane to airplane and tossing the mic in the earcup is the easiest and least stressful way of doing it. And with the right audio panel and good wiring behind it, the Bose A20, a late-model GoPro and a properly positioned headset capture pretty decent audio for a cockpit soundtrack. But now throw on a mask, and make it one that fits. For me it was trial and error. The problem I had was that the Bose—even at 12 ounces—was heavy enough to force the mask off my nose unless it had an internal rigid nose reinforcement. I choose not to wear an N95 in favor of a heavy cloth mask, and what works for me is one that has dual straps for extra anchoring around the back of the head. And even though the headset’s mic, in addition to having just the right gain, needs to be correctly positioned against the covered lips, some voices may not annunciate enough to break the ICS squelch through the mask’s barrier. If you’re having a new audio system installed, make a request to the installer to participate in the configuration effort so you can help fine-tune the squelch and mic gain threshold settings. Maybe dialing in a little extra mic gain and making a squelch sensitivity tweak is all it takes. It’s worth it.

On the Aerox flight demo, I got to try the company’s $140 Pendant cannula with adjusting needle valve—a plastic mustache. It worked fine under the mask and after a few minutes I forgot it was even there. The mustache has just enough padding for comfort, but it’s not too bulky to interfere with a good-fitting mask. A hangar neighbor admitted that he’s using oxygen less frequently because he’s masked up when flying with a copilot, and doesn’t even want to deal with fitting masked-up passengers with a cannula, so he just flies his turbocharged single at lower altitudes. Resist that temptation because it’s really not a big deal when you find the right combination. The other thing that works for me is the Flying Eyes sunglasses. From the beginning, the Flying Eyes were designed to be headset friendly because they have ultra-thin temples and as it turns out, those thin temples are also mask friendly. When I’m not wearing the Bose, I wear a Clarity Aloft Flex in-ear headset that secures around the back of the head, and the one time I tried the set with a mask and sunglasses I was able to make it work. Got a setup that works for you and your passengers? Tell us about it. —Larry Anglisano