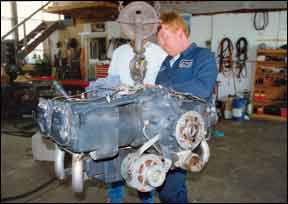 The Declining State of Maintenance
Although I didn’t plan it that way, this issue deals with a couple of critical aircraft maintenance considerations: corrosion prevention efforts and engine maintenance. The ugly reality here is that owners, because they are flying less, are also doing less preventive maintenance, if they’re doing any at all. It has now become normal to see an airplane in annual with 20 or fewer hours on the clock during the previous year. You can blame this on high fuel prices if you want, but I think there’s more to it than that. I think just about anyone who can support the airplane’s fixed costs can also afford another 100 gallons of gas a year. But I digress.

I was talking to a mechanic the other day about an annual he was working on. The airplane needed some significant work, including a couple of overhauled mags. They hadn’t been touched in 1200 hours, despite the standard service bulletins requiring 500-hour inspections. He also told me that when he calls owners to discuss such things, he’s hearing more pleas to just overlook the problem or defer it to next time. I suspect a lot more IAs are being asked to sign off unairworthy airplanes and that it’s getting more difficult for them to resist the pressure to do just that.

On the engine front, when I was doing the interviews for the bulletproof engines piece on page 11, nearly all of the shops told me they’re seeing engines come in for overhaul that just haven’t been maintained even to the minimum condition—like no oil change for two years on an engine that hadn’t been flown 40 hours during that period. Dave Allen from Poplar Grove Airmotive says he thinks at least some Continental cylinder problems are due to owners and/or mechanics not tending to the unmetered fuel pressure settings on Continental fuel systems. This is a critical procedure that’s not that difficult to do, but it’s either being intentionally overlooked or just forgotten entirely. If you, as an owner, skip enough maintenance procedures, they’ll recede into the background and before you know it, you’ll have a scrap heap on your hands.

None of this is to say that deferred maintenance is a bad thing. It isn’t at all. You simply can’t afford nor do you need to constantly fix every little thing that’s wrong with the airplane. If a CHT probe goes south or an oleo strut gets a little weepy, you don’t have so drop everything and fix it before the next flight. Same thing with the 500-hour mag check. If you sail past it by 50 hours with no indications of malfunction, hair isn’t going to erupt from your palms. But there’s a reasonable limit in there somewhere and I think if you fly another 500 hours and five years without checking the things, you’re missing the point.

My suggestion is to budget money for preventive but optional maintenance such as the corrosion treatments covered in this issue and don’t backslide on it. Even a modest airplane is a substantial investment that simply craters if you don’t take the minimal steps to keep it from corroding or accumulating so many deferred items that it’s functionally unairworthy.

Digital AvCon
We’ve heard from a number of readers requesting a digitial issue of Aviation Consumer and we’ve got plans in the works to make this happen. But before pushing the button, we would like to hear from more readers with ideas on what exactly you’d prefer. Some years ago, as a publishing company, we jumped the gun on this by offering electronically deliverable PDF versions of our magazines. But that was pre-iPad and the effort failed to gain much traction.

So, if you’re interested in a digital edition, how about going to this link—www.snipurl.com/224ql8l—and let us know what you think. We’ll take it from there.