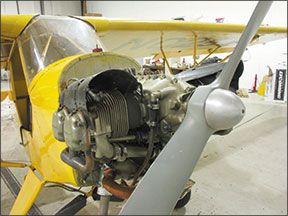 As pilots and aircraft owners, we always seem to be worried—justifiably, I think— about fuel. We’re concerned about price; apprehensive about a reliable supply in the future (Paul Bertorelli has an article about one potential solution on page 12), cautious to assure we have enough on board, with reserves and, should we have an accident, we know, in that primitive place deep inside us where our fears reside, that the fuel we have been relying on can kill us.

Until the mid-1950s, it was pretty common for smaller general aviation airplanes to carry their fuel in a tank between the engine and cabin. The reasons boiled down to ease of design and manufacturing cost. For some years, the fact that those tanks would rupture in even low-speed accidents, leading to post-crash fires, was not considered of importance.

By the mid-1950s, the combination of the high accident rate in general aviation and the number of post-crash fires got the attention of scientists and engineers. Questions were asked as to why a crash of such airplanes as Cubs, Champs and Chiefs that should have seen occupants walking away with minor or no injuries were fatal because the fuel tank opened up and a major fire started before anyone could get out. That airplanes with fuel tanks in the wings, such as Super Cubs, were not as likely to burn did not escape attention.

NACA, then NASA, did full-scale crash testing in the 1950s through the early 1970s. Cessna, Piper and Beech got involved—providing airplanes to be crashed and engineers to evaluate what happened during impact sequences. What was learned about crash dynamics changed the way general aviation airplanes were built. Restraint systems improved, airframes were designed to absorb impact forces by crushing rather than transmitting the energy to the occupants and fuel was stored away from the cabin.

The result was that post-crash fires in general aviation airplanes became less common. There’s no way of knowing how many lives were saved or people who weren’t hideously burned. But now, when a Cirrus pilot loses control on landing and smacks into a fence post at 30 MPH, the odds are everyone inside will walk away—so long as they were wearing the restraints. It takes a pretty high-speed impact to open up the fuel system and start a post-crash fire in a modern general aviation airplane—except, of course, in Hollywood.
I fly Cubs and Champs with some frequency. I’m aware of the post-crash fire risk—but I’m willing to take that risk when flying a 70-year-old design that has a market value of about $20,000. However, there are some LSAs that are priced far, far higher and are touted as being of the latest design—yet they carry their fuel in a tank in the nose, the location that, in my opinion, was so long ago considered to be unacceptable in an airplane marketed to the public.

I fully recognize that designers agonize over every pound in an LSA. They cannot incorporate every single safety concept that has been discovered for general aviation. Yet the location of the fuel tank is so basic, and so much research and testing went into the subject, that I cannot understand how engineers would countenance such a design today. What were they thinking?

Were the designers simply ignorant of the vast amount of data on fuel system design? Was it a lack of knowledge of the history of aircraft design or failed institutional memory? Did they know and not care?
One thing history has taught us for certain—if airplanes are sold, some of them will crash. While all flying involves risk, knowing what we know about design, accident rates and risk of post-crash fire, I don’t think a nose fuel tank design is appropriate in a production airplane in this century. —Rick Durden