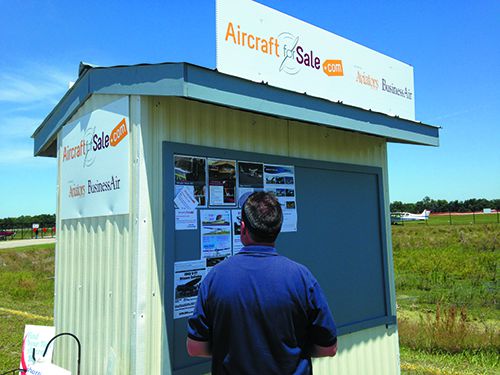 Whether it’s traveling or kicking around home base I get asked that a lot lately. And it’s often from longtime airplane owners tired of shelling out retirement bucks to feed an old Bonanza or Cessna 180, especially for avionics upgrades, plus buyers are still recovering from the ADS-B buy-in. Non-TSO (but STC’d) gear has lowered prices for EFIS and autopilots, but not as low as experimental stuff, which require neither certification standard. Compare a glass upgrade from the round gauges in a Lancair IV to the same upgrade in a Mooney and I think E/A-B, or Experimental Amateur-Built aircraft—call them homebuilts, kits or both—look pretty compelling.

But the buzzkill comes halfway through the project when you realize—without an airplane—you really want to fly your kit, but don’t have the time to finish it. Maybe buying one that someone finished is the better option. But do you really want to buy an airplane that someone else built? In plenty of cases the answer is yes, and in plenty others it’s hell no. I’ve had my hands in both and have been both impressed and frightened by what I saw. When asked to be pointed in the right direction, I usually recommend joining up with a local EAA (Experimental Aircraft Association) chapter. Here you’re bound to find someone who can help with the sharp-eyed process of finding a quality build. But you gotta know what you want, first, and many buyers simply end up with the wrong airplane. I’ve seen some of them auger. That Lancair IV won’t play in the ice like your Bonanza did. But man, does speed rule in the world of homebuilts.

Maintaining an experimental is a little different, even though—like a certified airplane—every year someone has to sign it off as being airworthy. To do that, the original builder generally gets a repairman certificate from the FAA after completing the final build signoff. This gives the builder an authority to do a yearly condition inspection on that airplane. But if the airplane changes hands, the new owner will likely be taking the airplane to a licensed A&P for the inspection. Depending on the model, that might be easy or impossible.

Marc Cook, my counterpart over at sister publication Kitplanes Magazine, reminded me that buyers crossing the line between used certified airplanes and experimentals need to go into the buying process with eyes wide open, and with a healthy level of self-learned expertise. That includes being able to recognize a good, bad and mediocre build quality. That also applies to the quality of the avionics install, and there could be a lot of critical integration, especially autopilot interfaces. In my experience, a hacked avionics install often reflects the rest of the aircraft’s build quality.

Kit aircraft are typically the cheaper buy-in, with the bonus of sometimes getting a newer and more modern airframe, including composite design. Many homebuilts are already nicely equipped with modern gear, although expect a mix of old and new—and be ready to debug once it’s your airplane. What many fail to realize is that most of the more common experimentals have certified or certified-like engines and propellers. And the best part is an owner can modify the airplane (and build parts for it ) any way they wish without having to deal with STCs, FAA field approvals and money-burning TSOs.

On the downside, compared to a certified model there will be a lot of variation from one homebuilt to another. There’s no guaranteed certified level of handling, particularly when it comes to stability, stall response and overall flying experience. In other words, if you can fly one Cessna Skyhawk you can pretty much fly them all. That’s not necessarily so in the homebuilt world.

Oh, tired of high insurance premiums for that Bonanza? Don’t underestimate the cost of insuring a homebuilt—some bring hefty premiums—especially in the current hardened insurance market.

If you’re new to the market, maybe limit your choices to models that are well-populated. Van’s Aircraft, to name one kit, is so popular you’d be hard-pressed to not find at least one RV model living on most any airport.

One model that comes to my mind is the Van’s RV-6 (tricycle gear) and RV-6A (conventional gear). More than 2600 of these kits have been built over the span of 30 years. You’ll be able to round up a whole lot of support—both before and after the sale—for something like this rather than a model that exists in limited numbers.

Once you find the model that you think you want to own, go fly it. I’ve seen buyers smitten by ramp appeal, but bitten by flying characteristics that were beyond their skill level. For starters you want to know how quickly the aircraft accelerates, and what kinds of control inputs are required to keep it tracking the centerline. Be on the A game. As Marc Cook pointed out, homebuilts are often small and slick with a lot of power—that makes them fast and different. Find someone who knows how to fly it to teach you.

Like airworthiness directives that apply to certified aircraft (which will also apply to some engines and propellers on homebuilts, too), part of the prepurchase work will be researching a kit manufacturer’s service bulletins. Depending on the size of the manufacturer and the existing fleet, this may be easy or difficult. Again, lobby the help of the EAA.

If you’re serious about putting a used homebuilt in your hangar I encourage you to read the ongoing used homebuilt series in sister publication Kitplanes. It’s resourceful and should set you on the right path.