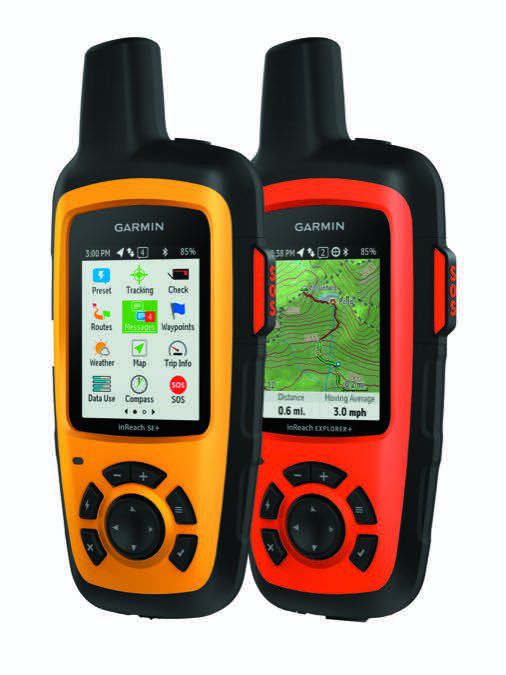 In February 2016, Garmin purchased Maine-based DeLorme—the maker of topo maps and the inReach portable two-way Iridium-based satcomm navigator. The inReach tech was a good score for Garmin because it has a place in multiple markets including aviation, outdoor and marine.

Moreover, the future of Iridium-based communicators looks bright. Iridium is in the process of replacing its aging Block 1 circuit-based satellite infrastructure with the data-centric Iridium-NEXT IP-based satellites, which will eventually mean lower data costs and faster data speeds, with a focus on messaging and web browsing.

In the interim, Garmin released the first branded inReach devices: the Explorer+ and SE+. We’ve been using the flagship Explorer+ with the latest version of Garmin’s compatible Pilot app in the air and on the ground. Herewith is an overview.

Garmin sells two versions of the inReach satellite communicator. The $399 inReach SE+ and $499 inReach Explorer+ both do real-time tracking (location sharing through the web-based MapShare portal), two-way text messaging, can trigger interactive SOS calls to the GEOS International Emergency Rescue Coordination Center (IERCC) and have built-in Bluetooth for wireless connection with Garmin’s Pilot tablet app. They also work with Garmin’s Earthmate map for downloading topo maps and NOAA charts. The models differ in that the flagship Explorer+ comes with preloaded DeLorme topographical maps with onscreen GPS-based routing. Additionally, the Explorer+ has a built-in digital compass, a barometric altimeter, plus an accelerometer. We think the features are worth the extra $100 for ground use, but not air use.

Both models share the same physical dimensions. They weigh 7.5 ounces and measure 2.7 by 6.5 by 1.5 inches and have a built-in GPS and Iridium satellite antenna. We found that the inReach is the perfect size for stashing in a jacket pocket and in the map pocket of the airplane or attaching to a backpack or flight bag, thanks to the standard carabiner clip.

The inReach runs on a rechargeable lithium-ion that proved to have impressive endurance. They have to because remember, the inReach is a tracking device that might actually get you rescued. Officially, the specs call for 100 hours of life at the default 10-minute tracking mode, up to 75 hours at 10-minute tracking with one-second logging and up to 30 days in power-save mode, which reduces the tracking interval to every 30 minutes. Powered off, the batteries are said to last three years.

The inReach is powered with a Micro-B connection, but we wish it used a Mini-B because that’s what the majority of our devices use. The power port is protected with a rubber weather cap, plus the entire unit has an IPX7 water-resistant rating. You can’t swim with it, but it will survive splashes, exposure to rain and snow and incidental exposure to one meter of water for up to 30 minutes.

The inReach doesn’t have a touchscreen, but instead has a straight-forward UI interface where you move around menus with a bezel rocker pad and six function keys. We were able to start using the device without hitting the users manual—a good thing.

Another good thing is the display. It’s a transflective color TFT with 200- by 265-pixel resolution that performed well in direct sunlight, plus it has adjustments for backlighting. But, the font is relatively small and there’s a lot of data on the 2.31-inch screen.

The screen has basic icons (spread out among two pages) for various menu functions like map, messages, routes and waypoints, to name a few major ones. There are also status icons at the top of the screen for showing the status of the internal GPS, Bluetooth connection, unread text messages and battery status. The status LED on the bezel flashes green if you have a new message, flashes red if the receiver doesn’t have a clear view of the sky (it also flashes red if the battery is below 10 percent), plus it alternates red and green when you trigger an SOS.

Whether in the aircraft or on the ground, one common function you might use is tracking. When you start the tracking, the inReach simply logs the initial location and also updates the track line on the map display at the set tracking interval. The device then periodically (again, at preset rates) transmits the position over the Iridium satellite network. Iridium offers full pole-to-pole global coverage.

Your followers can track you on the MapShare web-based portal (they can also ping the inReach to see the current position and send a message), plus you can embed MapShare data on social media, including Facebook.

The inReach has a smart SOS function that helps conserve battery life, plus an SOS key that’s protected by a cap to guard against inadvertent activation. Simply hold the key down and a default emergency message is sent (you can edit custom SOS messages from the SOS page) along with your current position. For the first 10 minutes, location updates are transmitted every minute. After the first 10 minutes, location updates are sent every 10 minutes. If you remain stationary, position updates are sent every 30 minutes. You can also reply to the confirmation message from the emergency responders. If you want to cancel the rescue service, hold the SOS key and press Cancel.

Since the inReach is also a handheld GPS, you can navigate directly from the map by scrolling/selecting a point as a destination. In our trials, the receiver locked on quickly even in dense forest and in valley areas.

Before a trip, you can preload routes from your MapShare account, while others can see your progress, waypoints and destinations. You can also request basic, premium or marine weather forecasts. Be prepared for data charges.

There’s also an onscreen compass (standard on the Explorer+ only) that serves double duty as a navigation display. A heading pointer indicates the direction you’re going, while a bearing pointer points to the loaded destination. There are also speed and distance data fields. Compared to aviation navigators, it’s a pretty basic feature set, but it’s an effective ground navigator, which also shows roads.

Aside from the SOS utility, the real value of the inReach devices is their two-way communication capability. Unless you’re at low altitude, you can’t rely on cellular service, so the inReach is another way to communicate via SMS messaging.

You can use the inReach as a standalone communicator through the built-in Messages application much like you do on a smartphone, although without the convenience of a touchscreen. Instead, you type with the four-way rocker pad and the Enter key. It’s really not as awkward as we expected.

What helps (or hurts, depending on how you feel about a device choosing your words) is that the messaging app uses predictive text. You likely won’t be sending long-winded messages with the device; think quick utilitarian communication, for which it works quite well.

When you initiate an SMS, it starts by asking who you want to communicate with. You can enter the phone number directly or select contacts that you’ve added. Type the messages, hit Send and off it goes. But not at blistering speed, that’s for sure.

In general, we waited several minutes (one time nearly 15) for short messages to send, which is confirmed with an audible chirp. There’s also the familiar spinning wheel next to the message that shows the send is in process.

There are two categories of subscription plans: annual and monthly. On the Monthly Freedom plan (geared toward seasonal or occasional use) you pay for airtime only when you need it and you can move up and down a plan at no charge. There’s a minimum 30-day commitment, which allows you to suspend the service. All plans include unlimited SOS service and preset messaging.

On the other end of the spectrum is the Safety plan for $14.95 per month under the Freedom program. It includes 10 text messages, but you’re charged 50 cents for each additional message, plus 10 cents per tracking point and location ping. The plan that may make the most sense is Recreation. It’s $34.95 per month and includes 40 text messages and unlimited tracking, at 10-minute intervals. Each plan has a $19.95 activation fee.

We think the flagship Explorer+ delivers a lot of utility, but only for times when a cellphone doesn’t work. The SOS function is a bonus and the inReach is easy to use. If ground maps and navigation aren’t important, but reliable cabin messaging is, save $100 and get the SE+.