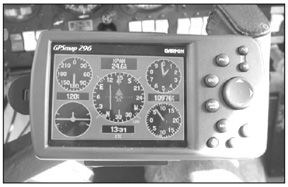 Garmin 296
As a long-time Garmin groupie and stockholder of the company, I phoned in my order for a GPSmap 296 the day they were offered and took advantage of Aircraft Spruces trade-in-your-old-295 deal. After a week of using the 296, I began a frustrating six months trying to get a refund, with both Garmin and Spruce stalling at every turn.

I found the 296 disappointing and even dangerous due to its daylight-fading screen. Its perfect in a dark closet, excellent at night and passable on a dull day. But in bright sun? Virtually useless. Im back to my 295 with its bright, primary colors and continue to find it a marvelous piece of gear.

Did you actually fly with a 296? During the day? If not, you should have. If yes, why didnt you comment on the way terrain and text simply vanish to a pastel mishmash?

With all of Garmins advertising muscle, I can understand why Flying and AOPA Pilot avoid the screen issue and always picture the 296 using a dazzling Garmin-supplied image. But why did Aviation Consumer use these unrealistic shots in its original review and again now?

Please: Fly the thing on a sunny Florida day and take a picture of the screen. Show that in an article and describe how you had to crane your neck to see anything at all.

As a matter of fact, when we reviewed the Garmin 296 in the May 2004 issue, we did fly it extensively and in Florida. Heres what we said: In bright light, we found the color subdued, but even in sunlight, the detail remains readable. We used Garmins product photo because it illustrated the mapping detail and fit our layout better.

Admittedly, shooting these displays in the cockpit gives a poor sense of how they really read but the photo above appeared in the article. Judge it for yourself. Two tips: Polarized sunglasses will make the display harder to read. On some GPS units, running on ships power rather than the internal batteries improves screen brightness, although this isnt true of the 296.

You have totally missed the boat in your comparison of the Garmin 296 in the June 2005 issue. Lowrance does not have terrain avoidance so is not even in the ballpark.

A week after the 296 came out, I purchased one for my M20J. This technology was over $30,000 just the year prior. Garmin has made a product for under $2500 that has terrain avoidance capability. I fly out of Calgary to Alaska, Yukon, Manitoba and the Western U.S. in many mountainous areas and this is a safety issue. The unit is fantastic.

We might note that our June comparison of portable GPS picked Garmin as the best of the best. But some buyers dont want or need terrain avoidance and thus dont want to pay for it. Thats why we view Lowrances lower-priced models as high-value alternatives.

Diesel Doldrums
As I see it, there are a number of other factors slowing the acceptance of diesel-powered aircraft in the U.S. market besides the ones you mention in your article in the June 2005 issue. Unlike the European market, where avgas costs two to three times as much as Jet-A, the price difference in the U.S. is small and not always in favor of jet fuel. At one airport I fly into often, the price of Jet-A is consistently higher than that of 100LL.

The next issue is performance. The diesel-powered versions of the Diamond DA40 or the DA42 are substantially slower than the gasoline-powered versions. From my experience, fuel costs are not the major direct cost component of flying- maintenance is. So going slower will result in spending more flying time to get to your destination, which may not offset the lower direct costs from the reduction in fuel consumption.

Diamond indicates that the installed weight of the Thielert engines is higher than the Lycoming IO-360, even though their max power is substantially less. In addition, Jet-A weighs 14 percent more than 100LL. Even though the fuel consumption is substantially lower, the fuel-range-payload tradeoff is not much better due to the increased weight of the powerplant and fuel.Part of the power plant weight penalty is due to the liquid cooling but all other things being equal, a diesel will always weigh more than the same horsepower gas engine due to the higher compression ratio requiring beefier internals.

Another issue is cooling drag. All aviation diesels must be turbocharged. Both the Thielert and the SMA diesels run at high manifold pressures. Even with large intercoolers, which create their own cooling drag, there is more heat to remove from the engine itself due to the higher induction temperatures.

Diamond had to add additional cooling scoops to the Twin Star during development to cope with this issue. Look at the cowling for the SMA engines on the Cessna 182 conversion. It has huge cooling scoops compared to the Continental-powered version, even though it is rated for the same horsepower.

Diesels have less power lapse with altitude than normally aspirated gas engines, but unlike turbocharged gas engines, the current crop of diesels start losing power at only 5000 to 6000 feet.

I had some dreams that someday I might be able to replace the turbocharged 310-HP TSIO-550-C1B in my Malibu with the EASA-certified Thielert 4.0 liter 310-HP engine. Looking at the specs of the Thielert engine, it cant even produce 65 percent at FL250, while the TSIO-550 can produce 85 percent power at that altitude.

In addition, the dry weight of the relatively tiny (243 cubic inches) displacement Thielert is at least 50 pounds more than the Continental, exacerbating the Malibus already forward CG issue. Diesels still need more development work in order to be a desirable replacement for gas engines, in my view.