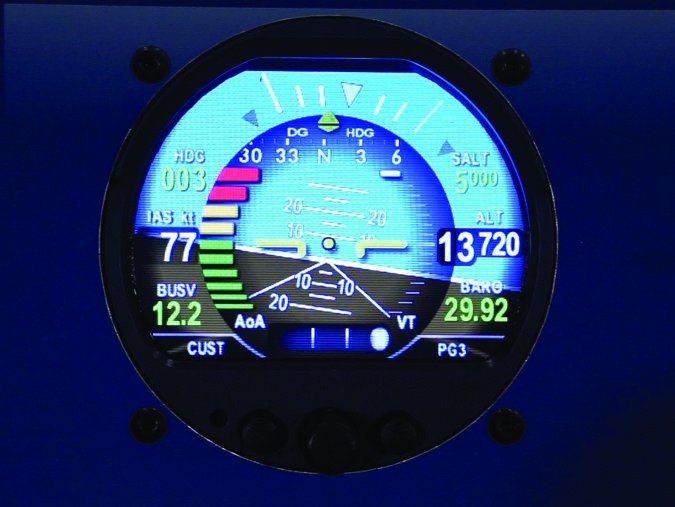 If we haven’t reached the point where you can no longer afford to keep your iron gyros, surely we’re not far from it. At AirVenture 2018, yet another startup introduced a low-cost EFIS—two, actually—and across the field, Dynon unveiled the D3, its latest low-cost portable EFIS.

Albuquerque-based AeroVonics came from the blue with the AV-20, an $800 miniature EFIS and a planned $1600 instrument that will compete squarely with Garmin’s brisk-selling G5. As interesting as that might be, the backstory is even more intriguing. AeroVonics products are pushing the FAA’s relaxed certification protocol to the limit, suggesting that more products may be on the way under the FAA’s NORSEE process. (See below.)

AeroVonics has in mind inexpensive replacements for vacuum instruments with its AV-20 and AV-30 self-contained multifunction instruments. The $800 AV-20 fits into a 2-inch instrument hole—the size of a typical clock—and provides 11 discrete functions, including attitude, AoA, bus voltage, flight timer, TAS display, G-meter and a clock. There are actually two versions of the instrument. The AV-20 is a minimal variant that doesn’t have the gyro sensing. It will sell for about $499. The AV-20S packs all the features. We saw the instrument demonstrated at AirVenture and although it appeared to have some sort of extraordinarily sharp display, AeroVonics’ Jeff Bethel says no, it’s just a garden-variety TFT. But the AV-20’s software tweaks the graphic processing at the sub-pixel level, giving the instrument dense colors and smooth refreshes.

All that’s required to install it is the FAA’s NORSEE letter and plumbing into the aircraft pitot/static system, plus power and ground. Like most avionics these days, it’s agnostic on voltage—14 or 28 volts will do. It has an internal battery the company says will operate it for least 30 minutes in backup mode. Most owners will probably engage an A&P to install it and other than a logbook entry, no further paper needs to be shuffled.

AeroVonics was awaiting the final NORSEE approval at press time and expected to be able to deliver products within a few months. The AV-20 doesn’t have inputs beyond the plumbing and power and is meant as a supplemental standby, not a replacement gyro.

But AeroVonics has a larger instrument for that task, the 3-inch AV-30, selling for $1595. While Garmin’s G5 and Dynon’s D10A occupy a similar space in the certified panel market, the AV-30 has some features no other gyro in this class has. Like the others, it’s intended to be a primary attitude gyro to replace vacuum instruments.

For certification, AeroVonics will use the AMOC route—alternate means of compliance—that Bethel describes as between the NORSEE path and an elaborate STC-AML process. For its AV-30 program, AeroVonics will have to show compliance with RTCA’s DO-160 hardware-testing protocol, but not DO-178, which covers software. Bethel says that saves an enormous amount of testing dollars and allows the low price point for an instrument usable in certified aircraft.

AeroVonics plans an approved model list that won’t cover everything flying, but will allow installations in the majority of the piston fleet. The approvals will allow the removal of vacuum systems.

Like the AV-20, the AV-30 has a long list of features, but it adds HSI/DG mode, GPS navigation data overlay and vertical speed trends.

Unique to the AV-30 is the ability to configure the electronic display to look just like a conventional blue-over-brown mechanical gyro, but with airspeed, altitude, baro and other customizable fields displayed digitally. Or, at the push of a key, it can be configured as a conventional DG.

You can see where this could go. For $3200 in hardware, you could readily replace both a vacuum AI and DG for a price about $1500 less than doing the same with Garmin’s G5 AI and DG combination. How about attitude autopilot support? Nope, neither the AeroVonics products nor the G5 pair offer this capability for legacy autopilots, although both have heading interface for rate-based autopilots such as the S-TEC line. AeroVonics says adding this capability is a certification hill too steep to climb, at least for now.

In 2012, Dynon leveraged its expertise in inexpensive panel-mount equipment to produce what it called the D1 Pocket Panel. It was a battery-operated portable EFIS with a MEMS-based solid-state gyro similar to that used in certified AHRS systems. There’s no air data, of course, so the displayed altitude and airspeed is GPS-derived, meaning the latter is really groundspeed, not airspeed.

The D3 introduced at AirVenture is the third iteration of this product and this time around, Dynon has eliminated the side bezel controls in favor of the more familiar touchscreen technology smartphones have. The D3 has a rudimentary pulldown menu structure that’s intuitively self-explanatory.

The instrument also has synthetic vision to bring a little terrain awareness to the party. It also includes a G-meter, a slip-skid ball and GPS vertical speed.

Being a portable, the D3 requires no approval. It can be mounted anywhere in the cockpit using a RAM suction cup or into an empty instrument hole using Dynon’s snap-in squeeze mount. AC and DC power adapters are sold with the D3 at price of about $879, discounted.

Click here to watch a video on AeroVonics and find Dynon atwww.dynonavionics.com.

If you’ve bought an iPad mount from Guardian Avionics or a BOM from Levil Aviation, you might know what a NORSEE letter is because you got one in the box. Otherwise, what the heck is NORSEE?

NORSEE is an FAA acronym for non-required safety enhancing equipment. It appeared about two years ago when the FAA had an internal eureka in realizing it was actually decreasing safety by requiring stringent approval for aftermarket equipment like AoA indicators, electronic gyros , stability control and the like.

NORSEE is not an Advisory Circular nor a regulation, but an FAA policy letter, specifically PS-AIR-21.8-1602. It does provide regulatory relief in the sense that it allows manufacturers to field a specific list of 10 safety-related devices without completing a cumbersome STC/AML process or some other regulatory step through.

It hasn’t seen much use yet simply because manufacturers either didn’t have the listed products or weren’t sure how NORSEE applied to what they did have. Specifically, NORSEE can be applied to traffic advisory systems, terrain advisory, attitude and angle-of-attack systems, weather advisory gadgets, configuration advisory devices, extinguishing systems, monitoring and detection and stability and control. While the hoop jumping to obtain the NORSEE letter is not zero, it’s simpler and cheaper than the months-long process of proposing a test program, having the FAA approve it and then submitting the test results. As electronics grew ever more cheaper and capable, this process of itself kept some products off the market.

NORSEE assumes the installation of the covered device will be a minor alteration and it further assumes that whatever is installed will fail without adversely affecting flight safety. AeroVonics’ instruments represent the first purpose-made multifunction instruments approved under NORSEE.

“According to the FAA, we’re pushing the boundaries from a complexity and sophistication point of view. We’re right at the hairy edge of what they were ever going to approve under NORSEE,” says AeroVonics’ Jeff Bethel.

He said the FAA had concerns about displaying attitude because, heretofore, loss of it was considered a significant failure. But attitude display is clearly listed in the NORSEE letter, so the FAA had little choice but to go along. The results, thus far, are instruments notably less expensive than the competition.

See a video of these EFIS products attinyurl.com/j95ht2a.