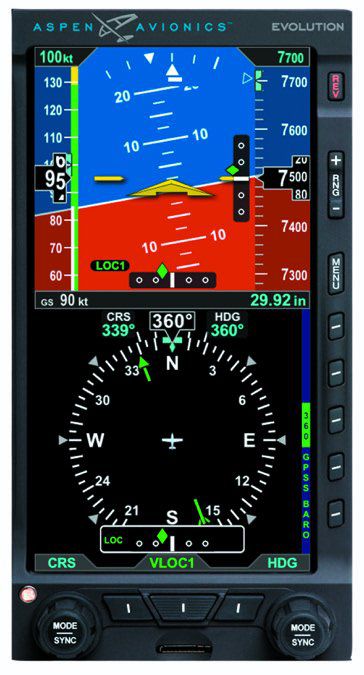 That’s my prediction for the coming years and we can all thank the FAA. That’s because the agency has a welcomed shift in mentality when it comes to certifying avionics, which of course has a direct effect on pricing. The reality check is that avionics technology has changed since the bad old days of analog equipment, and the long drawn out TSO pathway to certification is finally coming to an end. Prediction number two: Manufacturers who continue to certify products via the old-school TSO will be at a serious price disadvantage in the marketplace. Buyers will surely vote with their wallets.

The smart leadership at Aspen Avionics understands this fully and has already started to change the way it certifies some of its products. As we go to press, the company announced the Evolution 5 primary flight display pictured here. The E5 hardware might look identical to the Evolution display the company has been selling for years (it does have a brighter display and faster processing power), but the instrument is really the poster child for the next generation of certified avionics. That’s because it’s approved for retrofit in a wide range of aircraft (over 650 models), approved for use as the primary flight instrumentation without the need for backups (yes, yank all the spinning gyros from the panel and the vacuum pump from the engine), plus it’s compatible with a wide variety of third-party avionics. The price? Under $5000. The reason Aspen is able to sell its new E5 at a price point that I think buyers will embrace is because the instrument has no TSO. Instead, Aspen has done what Dynon and Garmin have done with competing EFIS displays and earned an STC for installation, sidestepping the expensive TSO process. Non-TSO’d flight instruments were once unheard of for certified aircraft, but the FAA recognizes that the technology packed into modern EFIS displays is simply more reliable and more safety-enhancing than steam gauges. Forget the romantic notion that real pilots fly steam gauges—we’re so beyond that. I asked Aspen’s president and CEO, John Uczekaj, to backstop my thinking on all this.

“I believe the FAA leadership has looked at the data, looked at the way we fly, looked at the technology in the UAV market and has come to the realization that safety can be improved by the current new technology,” he told me. I played devil’s advocate and asked Uczekaj if proving a product’s reliability via the STC process is really as effective as going through the rigors of the TSO process. That’s not an easy one to answer because a TSO is a prescriptive process. Still, the TSO process in terms of hardware testing differs little from an STC process because you still have to prove the hardware can function in a variety of temperature/environmental conditions. It’s the software aspect of new avionics that has changed the means by which new equipment is certified. “I can now prove a product based on performance rather than by prescriptive means, eliminating the idea that the more paperwork I generate, the more reliable a product is,” Uczekaj said.

My third prediction: Buyers will expect an open architecture, or the ability for a given brand to play well with others. Aspen gets it. Like the original Evolution display, the new E5 has a liberal interface potential and can be upgraded for more features with a software load. Moreover, a huge selling point of the E5 is its ability to interface with TruTrak’s low-cost Vizion autopilot. It can’t play with Garmin’s low-cost GFC500 autopilot—Garmin’s STC doesn’t include third-party displays. But, Garmin is credited for opening its G5 electronic DG/HSI to third-party autopilot interfaces, including S-TEC, Century, Cessna and Honeywell.

I think the FAA’s new mentality will play a huge role in reducing the price of avionics as we’re beginning to see, but it’s up to manufacturers to be innovative where it counts. This doesn’t just mean adding new features and capabilities. It also means giving buyers what they’ll expect: better value through an open architecture that plays across brands, just like Aspen’s new E5.