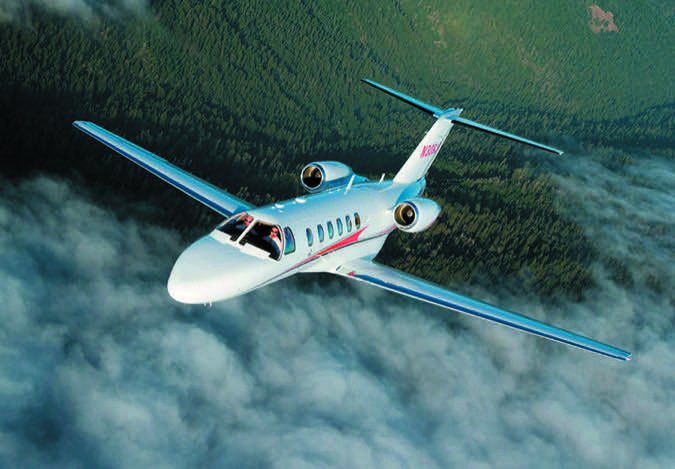 If you’re shopping the light jet market and the near $5 million HA-420 HondaJet doesn’t fit the budget, there are other choices that might be more palatable. To find out what they are, we talked with several business aircraft sales brokers and the model that came up in every conversation is the Cessna 525A CJ2+. While it may not be an exact apples to apples comparison with the HondaJet, it’s arguably the closest competing used jet in the class.

Some mistakenly think Cessna’s recently discontinued Mustang jet is similar in performance to the HondaJet, but it is not. It doesn’t come close in size or performance. But the CJ2+—the fifth-generation Citation Jet—does. The Aircraft Bluebook shows the average retail price for a 2007 CJ2+ at $3.2 million, but sales professionals tell us current market numbers are lower, even for later models with low time. There are many in the field.

Of course, Honda’s over-the-wing engine mounting configuration allows for more cabin width than the CJ2+, which has its Williams FJ44-series engines conventionally mounted to the fuselage. A CJ2+ can typically seat eight total occupants, including the pilot. Like the HondaJet, the CJ2+ can be operated single pilot.

When Cessna designed the original Citation Jet it was able to better the speed of previous straight-wing Citations by going with a natural laminar flow wing thanks to a joint design effort with NASA. The new wing proved to be far more efficient—improving lift-to-drag characteristics by as much as 15 percent compared to older models. Ever hear the term “slotation” used to describe older Citations? The straight wing was partly the culprit for the chiding.

If field length is an issue with the HondaJet, you might have more options with a CJ2+, which has published takeoff numbers around 3400 feet at sea level and 5180 feet at an altitude of 5000 feet at 25 degrees Celsius. Landing distance is around 2600 feet. The CJ2+ has a 45,000-foot service ceiling and a high-speed cruise of around 415 knots true. With four passengers, you’ll want to plan on a 1500-NM range. Long-range cruise is around 350 knots true.

Cessna designed the CJ2+ cabin with extra soundproofing and while it’s not as quiet as the Honda, ones we’ve flown in did have reasonably quiet dwellings. It’s also a pretty luxurious cabin with plenty of tray tables, 110-volt power receptacles and decent fit and finish. Although in the fit and finish department, we think the HondaJet sets a high standard.

The Williams-Rolls Royce FJ44 turbofan engine has a 3500-hour TBO and a typical overhaul can cost around $350,000 per engine, according to our sources. Each engine delivers 2400 pounds of thrust on takeoff. Average fuel burn, according to an operator we spoke with, is around 140 GPH—considerably more than the HondaJet. If you’re hooked on the Garmin G3000 in the HondaJet you might also find it in some CJ2+ models, or you can have one installed.

While the CJ2+ never came off Cessna’s assembly line with the G3000, the aftermarket Alpine package replaces the Collins Pro Line 21 avionics suite that was standard..

Cessna switched to the G3000 for the later CJ3 series, and the model line can be downright confusing, in our view. Cessna’s M2 is really a CJ1+ modified with the Alpine package, which in addition to the G3000 has upgrades to the pressurization and environmental control systems.

For pilots who are proficient, the G3000 is mainly what makes the HondaJet easier to manage during single-pilot operations and the same can be said for the Alpine-equipped CJ2+. There are 50 percent fewer knobs and buttons, compared to the Pro Line 21. The upgrade strips the airplane down to the point of requiring roughly 10 weeks of downtime and can cost over $900,000.

Even if you don’t spring for the G3000 upgrade in a used CJ2+, you might have to do some avionics upgrades. Not all will have mandate-compliant ADS-B or even WAAS LPV approach capability.

Cary Friedman, an experienced jet sales manager who has sold plenty of jets in his lengthy career (most recently with Bell Aviation in Columbia, South Carolina), says that while you’ll pay $5 million for a new HondaJet, it does come with a factory warranty and has ADS-B. Still, he advises to look hard at the used Citation market.

“The CJ2+ that’s been upgraded to WAAS LPV and ADS-B capability looks like a pretty good alternative to a HondaJet—especially one that has under 1000 hours total time and that’s priced around $3.5 million,” he said.

As for the used late-model light jet market, Friedman stopped short of calling it flat, but summed it up by saying it slightly favors the buyer. That alone could take some sales from Honda, with a used Citation CJ2+ being a top pick.