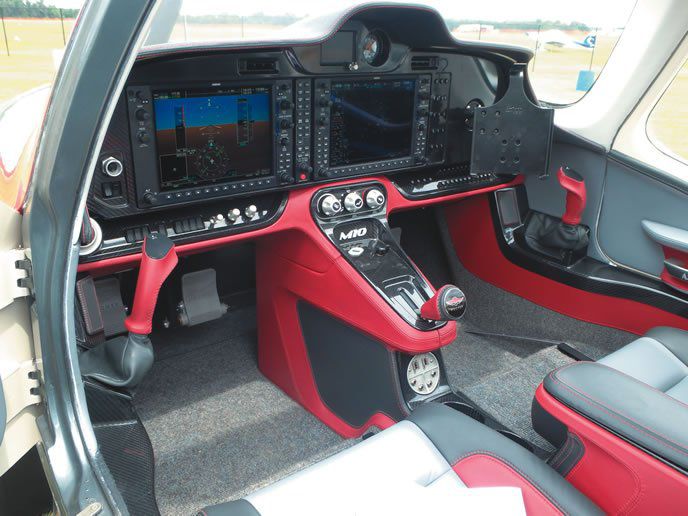 That’s what Mooney is looking for with its proof of concept M10T, which was on display for the first time at Sun ‘n Fun in Lakeland, Florida, this past April. If you’re a hard-core Mooney enthusiast, you get it. Mooniacs are a manically enthusiastic bunch and if it weren’t for the demand to support the speedsters they fly, the company might not be here today. Mooney was established in 1929 and cranked out over 11,000 M-series aircraft.

Frank Crawford, Mooney’s manager of technical resources, told me that for a while he was one of only nine remaining employees at the company’s now newly renovated headquarters located in Kerrville, Texas. Anyone that has worked with Crawford on the tech support level will recognize his dedication to the brand name, even when there was a dark cloud over Kerrville.

Today, the employee count has grown to almost 150 as the company ramps up production of the $700,000 Acclaim and the $650,000 Ovation 3. But in a market faced with rapidly changing demographics, stiff competition from Cirrus, a growing refurb market plus a new breed of younger pilots who demand more modern designs, I think it’s unlikely the Ovation and Acclaim can be Mooney’s staples for long-term success.

Enter the new M10T and M10J models. These are clean-sheet designs, engineered at Mooney’s new Chino, California, location and evidence that Mooney’s new owner—China’s Meijing Group—recognizes the need for models that can appeal to a younger generation of pilots. Judging by the reaction at Mooney’s lively display at Sun ‘n Fun, the eye-catching M10-series interests these budget-sensitive, tech-savvy younger pilots. More than one told me they have their sights on used Cirrus models because of the modern styling.

With a vertical tail section that’s unmistakably Mooney, the composite M10 has lines that look more like a Cirrus than a Mooney, plus a spacious, snappy and well-appointed interior that could easily be at home in an ultra-modern high-end sports car. While some older Mooney pilots were thumbing their noses at the M10 for being another one of those “plastic airplanes”—and seemed more interested in the Ovation 3 on display—younger pilots were definitely feeling the M10’s youthful vibes, which will be available as a fixed-gear trainer (M10T) and also as a retrac, labeled the M10J. Both models will be powered by Jet-A-burning and FADEC-contolled Continental diesel engines. The aircraft on display was equipped with Garmin’s G1000 integrated avionics.

Mooney pilots enjoy healthy amounts of speed and efficiency, and while the M10-series hasn’t flown yet (the company hopes to have a flight test program underway this summer), a rep told me the M10J should follow the lead of other Mooney models. With a 155-HP Continental CD-155 and retractable gear, the M10J is expected to cruise in the 160-knot range. The two-seat M10T (the proof of concept on display had a third-seat option) with a smaller 135-HP Continental CD-135 engine is expected to cruise in the 130-knot range.

Mooney CEO Jerry Chen said that M10 manufacturing will likely be spread out between multiple locations, potentially teaming the Kerrville, Texas, facility with the one at Chino, California, in addition to a factory to be built in China. Chen said that the established United States market has shown great interest in the M10 aircraft. Moreover, he hinted that the established Mooney brand means the new M10 might have a better market potential (or at least be easier to launch) in Western markets than it initially might in China.

Of course, the M10’s market success rides on price, which hasn’t been announced. I don’t know how much a new breed of Mooniacs are willing to pay for it, but based on those I spoke with, it has their full attention.—Larry Anglisano