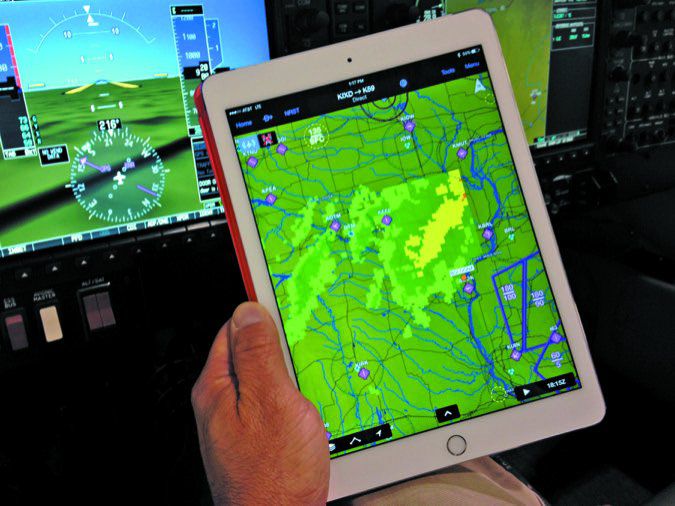 You’ve probably heard that the FAA, through its datalink weather service and support contractor Harris Corporation, is adding new weather products to the subscription-free FIS-B ADS-B data that’s broadcast to UAT/978 MHz ADS-B receivers. Since the rollout was scheduled for June 2018, like others I cranked up my portable ADS-B receiver and tablet app, but didn’t see the new lightning, turbulence, icing, cloud tops, G-AIRMETs and center weather advisories that are part of the new ADS-B In data. Without sampling the new weather products yet—including the planned new radar data that will replace the current Nexrad—it’s not fair to say the second-gen FIS-B stream will be a SiriusXM subscription killer, but based on the lineup of expected data it’s quite possible. Turns out implementing the new weather products isn’t as easy as I thought it might be, but it will likely be worth the wait.

And wait is what some users will have to do because according to Eldridge Frazier, the lead engineer for the FAA’s Weather Technology in the Cockpit Program, not only has the FAA’s weather provider slipped on the deployment, it will take time for app and ADS-B hardware manufacturers to modify software, hardware and in some cases, the TSO of certified equipment, which requires a new MOPS (minimum operation performance standard). The MOPS will be submitted to the RTCA committee and ultimately published in 2019 as DO-358A for flight information systems. According to Frazier, the actual data stream could be available later this summer. Garmin said it’s planning compatibility with its Pilot app for iOS users around the AirVenture 2018 time frame, which is when you’ll be reading this, and later in the fall of 2018 for the aera 660 portable navigator, the G3X Touch and Garmin Pilot for Android. For certified displays like the GTN navigators and G500/600 TXi displays, the products should play in the first half of 2019. Seattle Avionics said it’s working on implementing the data in its FlyQ app. ForeFlight will likely announce a plan by AirVenture this summer.

Frazier called the new suite of products the “bread and butter to the typical GA pilot,” reiterating the benefits of the data’s rapid refresh rate. The lightning product shows strike count and polarity information and is refreshed and uplinked every five minutes. That’s obviously not real-time data you’d get from an onboard lightning detector like a Stormscope, but it should be fresh enough to make on-the-fly tactical avoidance decisions. Lightning strike data is overlaid on a map and is intended to show the most severe areas of convective activity. The turbulence forecast product is updated every 15 minutes and includes clear air and mountain wave turbulence from 2000 to 24,000 feet and is reported in 2000-foot increments. It’s displayed on a map and color-coded based on the Eddy Dissipation Rate (EDR). The cloud top data is uplinked every 15 minutes in 1500-foot increments between 1500 and 15,000 feet and in 3000-foot increments from 15,000 to 24,000 feet. There’s also CWA (center weather advisories) for essentially real-time short-term forecasts for wind shear, freezing and heavy precipitation, turbulence and forecasts for low IFR conditions.

Frazier also boasted that the new MRMS (for multi-radar multi-sensor) that’s expected to replace the current Nexrad radar technology and deployed later this year will have a five-minute update rate. It integrates data from multiple radars/networks, surface observations and numerical weather prediction models. If you want to learn more, NOAA’s National Severe Storms laboratory published an informational document on the new technology at www.nssl.noaa.gov.

In other ADS-B news is the current functioning ADS-B Out equipage numbers, which according to the FAA is 50,763 aircraft as of June 1, 2018. It’s increasing, but lagging. It’s said that the force-fed ADS-B mandate is stick and carrot, and if you’ve invested in a full ADS-B Out and In interface, I think a better suite of subscription-free weather products takes some of the sting off.