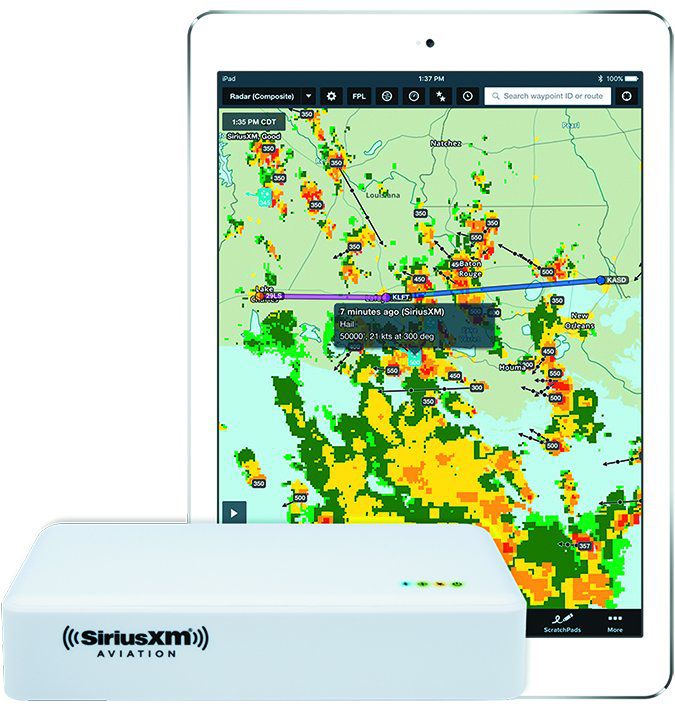 Subscription-based satellite broadcast weather data still beats ADS-B FIS-B data for tactically threading the needle through real weather. SiriusXM delivers more data, it works on the ground and has tighter image resolution. But when ADS-B got rolling, the budget-driven market generally favored subscription-free FIS-B, accepting its limitations rather than forking over $1000-plus per year on an XM subscription. Still, that didn’t stop recent letters and phone calls from readers complaining that Garmin’s GDL69 SiriusXM weather system won’t work with the popular ForeFlight tablet app, but it does with Garmin’s own Pilot app.

A selling point for Garmin’s new capable Flight Stream 510 wireless system is its ability to stream data from various panel-mounted systems and LRUs. This includes two-way flightplan data from a GTN navigator, weather and traffic from the GDL88 and GDL39 ADS-B systems and even Garmin’s new wireless ADS-B transponders. Got all that stuff and a ForeFlight Mobile subscription and you’ll enjoy crossbrand compatibility at its finest—except for the missing XM weather data. What’s up with that? To find out, I started asking some questions starting at the source with Bill Stone, Garmin’s aviation product manager, and asked if Garmin is intentionally maintaining a closed interface as some buyers suggest. You know, sort of like Apple.

“That’s absolute horse pucky. Going back to early products, including the first-gen GNS navigators, we realized that it’s in Garmin’s best interest to interface with as many products as possible. That comes at a sizable expense,” he said. Having been involved in a whole lot of those early retrofits, I can attest that Garmin did play well with other third-party autopilots, EFIS, traffic, weather and terrain interfaces. Stone explained why the XM interface (through the GDL69-series LRU) is different, pointing out that many trickle-down standardized RTCA and other interfaces originate in the transport-category market. Since the XM interface isn’t a standardized one (the transport market hasn’t adopted wired XM interfaces on a large scale), Garmin and others—including HeadsUp Technologies, with its XMD76 receiver—developed their own interfaces. “Since there is no public standard in place, XM is a proprietary interface,” Stone said. All right, but why not open the interface?

Garmin maintains that sharing a proprietary interface with third-party vendors takes consumer demand, engineering effort, time and ultimately, money. “If a third party (in this case, app developers) wants to display our product, we have standards for usability, integrity and the overall user experience. We have to protect our brand and reputation,” Stone said when asked about sharing the protocol. Let’s acknowledge the obvious. While Garmin sets a very high standard with its UI, there’s a business side to sharing protocols, and while Garmin and ForeFlight have partnered on a sizable portion of the Flight Stream wireless interface, they remain competitors in a small industry.

ForeFlight’s Tyson Weihs acknowledged that while this partnership has helped sell a boatload of Garmin products and ForeFlight subscriptions, it’s unrealistic to expect a totally open architecture for all products, with Garmin’s GDL69 closed protocol as an example. ForeFlight did precisely what I would expect and found a different partner for interfacing SXM weather on its app, working directly with SiriusXM Aviation with an interface that includes the SXAR-1 portable SXM receiver, pictured above, plus new subscription and hardware pricing. Introduced a couple of years ago, the SXAR-1 only worked with WSI’s PilotBrief app, but I suspect the ForeFlight interface will give it a new lease on life. I’m currently evaluating the interface and we’ll have a full report on it in our next issue.

Garmin left satellite weather out of its Bluetooth-enabled aera 660 portable GPS, but hinted that a new SXM receiver is imminent. New receivers might take satellite weather off life support, but in a market dominated by subscription-free ADS-B, cheaper fees and an open protocol are key to survival.