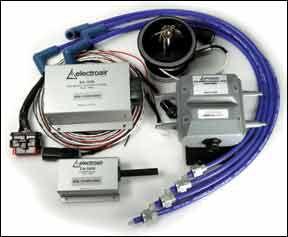 Electronic ignition systems for conventional aircraft engines haven’t exactly had a fun ride. Although solid-state ignitions have made inroads in the experimental market, makers of OEM aircraft have shunned them and even though the airplane ownership community has its share of gearheads, there haven’t been enough of them to make ideas like Unison’s LASAR magnetos or Continental’s PowerLink FADEC take flight. Even in airplanes wired with cutting—edge glass, stone-age magnetos are still the ignition of choice, straight from the factory.

If conversion to electronic ignition is somehow inevitable, a Michigan-based company called Electroair aims to be its latest leading edge. Electroair is taking another run at the electronic ignition idea, this time with an aftermarket replacement system evolved from an experimental product that’s been on the market for more than a decade.

Heretofore, electronic systems haven’t sold well because buyers couldn’t see much benefit against magnetos that they knew worked fine, albeit requiring maintenance and occasional replacement. So what’s Electroair’s pitch? A system whose reliability will eliminate at least some periodic magneto maintenance while offering fuel savings in the 10 to 15 percent range for owners willing to lean aggressively. Developed in 1992 by Jeff Rose, the original Electroair system evolved from a high-performance automotive ignition system designed for racing applications. It was applied primarily to Lycoming engines for experimental aircraft and was similar in concept to inductive-coil systems used in 1980s-era General Motors cars. Reflecting the technology of the day, the system was controlled by an electronic analog box; no software and no fancy stored engine maps. It also had a limited sensor array, by modern standards.

Electroair sold about 2500 of these systems in various iterations to homebuilders, although it’s not clear how many are actually flying. Those systems weren’t limited to Lycoming fours, either, but were applies to Lycoming and Continental sixes, plus early homebuilder favorites like the VW and Corvair engine and the Jabiru.

History
The company originally started by Rose was bought by new owners, Michael Kobylik and Pete Burgher, in 2005 and it soon determined that certifying the system for aftermarket applications was within reach. It continues to produce experimental systems, but has just received FAA certification for four-cylinder Lycoming engines of all types. It’s looking at similar approvals—eventually—for six-cylinder Lycomings and Continental four and sixes. For now, it has approved model lists for many of the Cessna 100-series airplanes and plans to add others going forward.

When we visted Electroair in August, the approvals were in the bag and the company was finishing manufacturing details on the first shipsets of production hardware. It expected to be shipping in volume later in the summer or early fall.

Bolt It On
By intent, the Electroair system replaces only one magneto and it’s not a closed-loop system with full authority control of spark and fueling, as are the Continental’s PowerLink and Lycoming’s emerging IE2. As Electroair sees it, this yields several advantages. The system was more realistically certifiable and affordable to build because it doesn’t require a second electrical source for backup.  Second, it’s relatively simple to install—the company estimates four to six hours of labor, variable by aircraft.  (At $80 per shop hour, figure around $500 in labor.)

Suggested retail is $3400, plus the installation costs. For that, you get the STC and hardware that includes a complete installation kit  suitable for Lycoming O-235, -320, -360 or -390-series engines. There are four principle components to the system: A direct-fire coil pack, a manifold pressure sensor, a mag timing housing and a control unit, plus cabling with terminals already installed.

The system’s high-tension plug wires are cut-to-fit, since each installation will be a little different and depending on what other components are already on the firewall, the Electroair boxes will need to be uniquely mounted. The MAP sensor can be mounted on the cold side of the firewall. The system can operate on any voltage between 12 and 28 and autosenses input power voltage.

Like virtually every modern automotive and motorcycle ignition system, the Electroair ignition uses direct-fire coils controlled by a logic board, in this case one with mapped in engine operating parameters. Most cars have a coil-on-plug arrangement with a low-voltage lead to the coil, which then delivers high voltage directly to the plug. Because the coils are long, that design isn’t particularly practical for aircraft engines, so the Electroair system has a four-coil pack, with high-tension leads to each plug. The leads are terminated with standard aircraft spark plug terminals and standard plugs are used.

For engine timing, Electroair uses what it calls a magneto timing housing. This gadget looks like a shrunk- down magneto and it bolts directly to the accessory case on the same pad as the right magneto, which is removed. (The left magneto—which typically has an impulse coupling for starting assistance—remains on the engine.) On the backside of the timing housing, the ElectroAir system has a timing wheel or gear with a 60-tooth configuration with two teeth missing.   A magnetic sensor senses the rotation of the gear and counts individual teeth, relying on the gap of the two missing teeth to signal top dead center on cylinder number 1, from which all subsequent timing is calculated.

Like other systems that have been used in experimental aircraft, the Electroair ignition uses what’s called lost or wasted spark. That means that it gains its principle advantage from timing advances greater than those delivered by the retained conventional magneto, which has fixed advance. The conventional mag continues to fire, but since its firing into an ongoing combustion event, the spark is thus wasted.

Variable Advance
The Electroair’s spark advance varies by engine and aircraft application and can be as much as a total of 45 degrees BTDC, according to Electroair’s Kobylik. As did Unison’s LASAR mag, the Electroair system has a fixed map or look-up table to determine advance for whatever operating parameter the engine happens to be in.

Other than sensed crankshaft position, it has only two other inputs: Manifold pressure and RPM. It has two timing advance schemes: The initial advance, which is the same as the conventional magneto, and “additional” advance, which is ahead of the conventional mag. For starting, the Electroair system can retard the initial timing to zero, then ramps it up gracefully as the RPM increases.

Advanced timing ignites the fuel/air mixture earlier and thus it promotes more efficient and complete burning of the charge. Electroair’s logic depends on a fixed MAP which adjusts timing to produce the best power for the MAP and RPM combination selected. As the engine is leaned or if power is reduced, the system responds with more ignition advance.

Direct-fire coils produce a more energetic spark than magnetos do, on the order of  50,000 volts versus 15,000 volts. The spark duration is also longer—about 20 degrees of crank rotation versus 5 degrees for conventional magnetos. All of this adds up to a hotter, more reliable ignition source. Theoretically, it might reduce plug fouling, but Electroair is making no specific claims.

Benefits
So what are the claimed benefits? Fuel economy, improved reliability and less maintenance. Electroair sees this as a potential money saver for high-usage aircraft—say flightschools or working airplanes like traffic spotters, patrol, banner towers or owners who just fly a lot.

If a 10 percent fuel savings can be reliably demonstrated, that amounts to a $10,000 savings over the TBO span of an engine burning 10 gallons per hour. Add another $1000 or so of banked mag maintenance and the economics look appealing, easily offsetting the $4000 it might cost to install the system. But if the real-world fuel economy is under 5 percent on an engine burning 8 GPH or less, the costs may be a wash, even with the savings on magneto maintenance. Higher reliability may be a factor for some owners.

In our view, this system may be most attractive to owners of high-output four-cylinder engines—say 180 HP and higher—who fly a lot of hours in flight profiles that allow leaning. Furthermore, the higher the fuel burn, the more potential fuel savings—if borne out—add up to real dollars. Electroair has its eye on the six-cylinder market, but can’t say when such systems might appear. For now, it’s concentrating on the Lycoming fours.

Because Electroair’s test aircraft, a 180-HP Cardinal, was still in experimental status and not available for a demo flight, we weren’t able to verify its claims for the ignition system, although we did see a bench demonstration and we examined the production-ready hardware.

We think to be successful with this system, Electroair will need to field a number of the certified units to see how they perform in real world circumstances. When Unison first launched its LASAR magnetos in 1994, its technical merits seemed similarly appealing. But in actual practice, owners reported that fuel savings were elusive and sales were never strong. Unison sold the product line to Champion and when last we checked with that company, the future of the product line was uncertain.

What’s different now and what favors Electroair is significantly higher fuel prices and owners paying more to fly less, something that might open up a niche for a system that actually saves gas.  We’ll be keeping an eye on this new product to see how it delivers for owners and we’ll plan a more in-depth evaluation in a year or so.