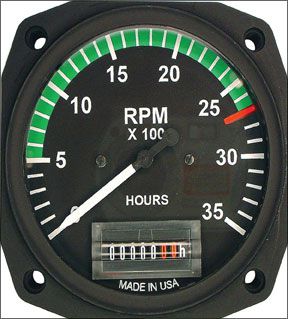 If youre like us, youre flying around in something built during the last century but lusting after some of the panel-mounted goodies available in newer aircraft. While its easy enough to shoehorn in a color moving map and some digital radios, modernizing other areas of your panel isnt. And thats a shame, since much of the engine and systems instrumentation in older aircraft appears borrowed from a 1947 Buick.

But, as usual, the aftermarket has provided in the form of engine monitors, fuel flow instruments and a smattering of tachometers. The tach market is not widely populated, so if you want one, the choices are somewhat limited. Heres a run-down on the pros and cons of this technology, plus a look at the major players in

Of course, the microprocessor in digital instruments does little more than count. Conveniently, a mechanical tachometer does the same thing. The big difference between the two involves how they receive a signal: The microprocessor counts electrical impulses sent to it via wiring, while the mechanical tachometers many moving parts count the number of times a cable attached to the engine revolves. The former is lighter, more accurate and less likely to fail, at least as long as the aircrafts electrical system powers the microprocessor. The latter is none of those things.

Electronic tachs also have something else going for them: They can do more than just count. Since they generally tap into the magnetos electrical impulses-although some models can be configured to use a gear-driven tach generator-they also compare the received signals, alerting the pilot to a magneto failure. Further, they can display the mag drop during runup and even advise of a loose p-lead, resulting in a hot magneto. Using LEDs, they also can alert to overspeed situations or when operating in a restricted RPM range. And, of course, they count up the hours the engine is running, although each does it differently, something well get to in a moment. The current market for electronic tachometers suitable for certified aircraft includes three products: the Electronics International R-1, Horizon Instruments P-1000 and an analog but still electronic offering from UMA Instruments, the T19-801 series. As a rule, these tachometers are designed for piston singles, though we are aware of dual installations in twins. Each is approved under TSO C49a and both the EI and Horizon products come with a supplemental type certificate including a broad approved model list allowing use as a primary instrument. Since its TSOd, the UMA electronic tach can be installed either as a minor alteration and a logbook entry, or with a Form 337 as a major one.

Other electronic tachs are available but lack a TSO or an STC/AML, making problematic their installation in a certified piston aircraft. These are mainly marketed to the experimental or ultralight/LSA crowd. If youre flying a turbine, you have other choices. Through our online sister publication www.avweb.com, we surveyed pilots and aircraft owners flying an electronic tach. With only one or two exceptions, respondents were uniformly happy with their decision to install an electronic tach and frequently reported that they identified unknown magneto issues and helped isolate other known problems with e-tachs. The table above summarizes these three products main features.

Electronics Internationals R-1 ($529 list, before options) offering is the smallest of the electronic tachometers, sized to fit into a 2-inch panel opening (an adapter plate is available for 3-inch openings). Its size and design complements EIs other instruments, so if youre re-doing your entire panel now or later with EI stuff, everything will look and function pretty much the same. In its center is a four-digit

LCD, directly presenting the engines speed to the nearest 10 RPM. This resolution eliminates one of the complaints about the R-1s chief competitor, Horizon Instruments P-1000, which resolves down to one RPM: Even the smoothest engine/prop combination fluctuates some, and the constantly dithering display can be a distraction.

Around the top of the instruments face is a semi-circular array of 17 color-coded LEDs, representing increments of 100 RPM, an arrangement EI believes provides the best compromise between an analog instruments ability to display trends at a glance and the electronic versions accuracy. The LEDs are matched at the factory to the specific aircraft type and color-coded green, yellow or red, to denote normal, caution and minimum/maximum RPM ranges.

Two push buttons are mounted below the LCD panel, allowing access to the devices hour and flight-time counters. The R-1 counts real-time engine hours at 1300 RPM and above, while the flight timer starts counting after 10 seconds at or above 2000 RPM, then stops when it drops below 1200. Finally, a circuit is built into the R-1 allowing an external annunciator-a buzzer, for example, or an idiot light-to be energized along with any warning on the instrument itself. The R-1 is TSOd and comes with STC paperwork, including an AML covering a wide range of makes and models. Installation can require connecting up to eight wires.

The P-1000 electronic tachometer from Horizon Instruments ($609 list) is a larger instrument, sized to fit 3-inch panel openings without an adapter. Horizon uses all that extra real estate to install more and larger buttons, plus an area for mounting a placard advising of any RPM limitations. Backing up that text are six LEDs indicating restricted (red), warning (yellow) and normal operating RPM ranges. Like the R-1, the P-1000 doesnt directly read engine hours. Instead, that information is retrieved using the push buttons.

Also like the R-1, the P-1000 traps and stores that flights peak RPM, and includes a dimmable back-lighting feature designed for connecting to the aircrafts panel lighting circuit. It also computes the mag drop and any difference during runup. During flight, the P-1000 will immediately alert if a magneto fails and advises of a

The R-1 will do this also, but only when RPM is reduced toward the end of a flight. Like the R-1, the P-1000 also comes with STC paperwork and an approved model list. Installed, the P-1000 requires connecting only four wires. One additional feature: The P-1000s mounting bezel allows up to a seven-degree tilt, making it easier to read when mounted across the panel.

If there are any user gripes with the P-1000, they focus on its starting to count engine hours at a miserly 800 RPM and the aforementioned one RPM resolution, which dithers constantly. “The constant hunting of the display is a little distracting until you get used to it. If there was a selectable damping mode, maybe allowing the display to show the nearest 10 or 25 RPM, then the display would not be quite so active,” Ric Travis of Germantown, Tennessee, wrote us, summarizing similar comments from users.

UMA Instruments, which supplies a wide variety of gauges to OEMs and others, also offers an electronic tachometer, the TSOd T19-801 series. Essentially, the UMA tach (about $415 list, before options) has electronic “innards” driving a conventional analog pointer in front of a dial. As with a mechanical tach, arcs and lines applied at the factory for the customers specific airplane denote normal, cautionary and prohibited operating ranges. Internal lighting is optional, as is an hour meter.

But thats pretty much it; there are no “whiz-bang” features offered by the UMA tach such as magneto monitoring, unless you consider electronic smoothness and reliability, along with a traditional look and feel close to the mechanical tach you removed. That said, one interesting feature of the UMA tach is the RPM at which it starts recording engine and airframe hours. Unlike the offerings from EI and Horizon (see the sidebar), UMAs tach starts counting hours either at 1800 RPM, the factory default, or some other customer-specified value.

If our mechanical tach failed and we had to replace it tomorrow, wed be tempted to go with the UMA electronic tachometer after marking it for our application. The

result would be a fairly seamless exchange, but we wouldnt get much more out of the deal than a new, more-reliable instrument along with maybe a pound or two increase in useful load. Its the least expensive of the electronic tachs available for a certified aircraft weve found, at least before adding on various options like internal lighting, and when the hourmeter is built in, it eliminates any button-pushing to read engine hours.

Our next choice is the Horizon P-1000. Its a drop-in replacement for most 3-inch panel openings, requires connecting only four wires and offers some much-needed magneto diagnostics sorely missing from most aircraft in the fleet today. Downside: the one RPM distraction and it starts counting hours at too low an engine speed for our taste, needlessly inflating airframe/engine total times. Finally, its look and feel doesnt appeal: The relatively large buttons at the bottom and unused space on each side scream 1985 to us. It could use a face lift.

For around $80 less than the P-1000 (MSRP), we could replace our mechanical tach with an R-1 from EI and get the magneto-related bells and whistles switching to all-electronic offers. If we did it right, we could even save some panel space by mounting the R-1 in a smaller instrument opening. Plus, the R-1 can be connected to a remote annunciator and even an optional data recorder. Its a simpler, cleaner design-at least when compared to the P-1000-and offers what we feel is the best of both worlds: a digital readout accurate to 10 RPM, plus colored LEDs simulating a traditional tachometer needles trends and arcs. So, even though its a close call-and the P-1000s tilting bezel may change an individuals calculus-adding the R-1 is what wed do.

Until, that is, someone comes up with an electronic tach that catapults us squarely into the 21st century. It should be TSOd/STCd/AMLd, use a 3-inch form factor, be built around a full-color, touch-screen plasma display, have no moving parts, depict a conventional tach needle and a digital readout along with engine hours, include the magneto diagnostics of the P-1000 and R-1, record RPM, magneto health and flight time and come with some other bells and whistles we havent even thought of. And retail for $500, installed. While were waiting and dreaming, well be happy with the R-1.